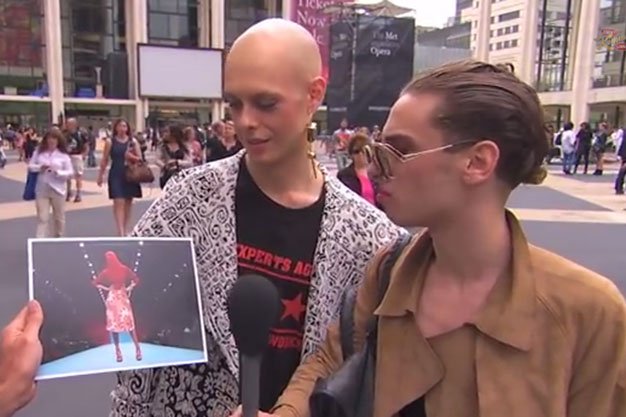 A still from the Jimmy Kimmel bit

It was funny the first time Jimmy Kimmel did it back in 2013. The show’s Lie Witness News went to New York Fashion Week and asked the fashion crowd about designers the writers had made up.

More than a few people embarrassed themselves on camera, spewing opinions about runway shows by couturiers who don’t exist.

Kimmel went back for seconds in 2014. Vice followed with an article, I Dressed Like an Idiot at Fashion Week to See How Easy It Is to Get Street Snapped. And Stylelist Canada published a video, We Convinced Fashion Week That A Cheap Halloween Costume Was High Fashion.

Fashion shaming is the season’s hottest – and rather cowardly and unoriginal – trend.

Besides being painfully overdone, these videos and articles perpetuate the stereotype that those who care about fashion are superficial, unintelligent and lesser-than.

Sure, like any other major event, fashion weeks attract some wannabes.

But you don’t see smug, self-congratulating TV personalities flocking to film, music or gaming festivals to expose (a less generous person may say “trick”) eager fans and attendees. No one runs around Toronto International Film Festival (TIFF) with a camera asking film writers and bloggers about non-existent obscure films and directors.

Kimmel has filmed Lie Witness News segments at Coachella and Justin Bieber concerts, too, but these heavily featured young women.

Fashion shaming plays on harmful characterizations of these individuals as vain, vapid, flighty and untrustworthy.

The truth is, fashion is a high-stakes business and cultural institution that employs some of the world’s most creative individuals. It’s also an important mode of expression that attracts those who are often ignored, if not oppressed, by mainstream society.

Some argue that the subjects of these videos do it to themselves no one is forcing them to lie or grandstand. It’s an easy criticism, but if someone stuck a camera in your face and started asking questions, wouldn’t you attempt a good-natured stab at an answer? Our culture  doesn’t make it easy for someone to simply say, “I don’t know.”

Imagine a young woman unable to wear what she wants at school or home due to strict, sexist dress codes. Or a young gay man who, out of fear, only dresses to blend in with others in his conservative suburb. They come to a big-city fashion week, finally able to express themselves, and end up being ridiculed and shamed by major media outlets.

The joke doesn’t seem so funny any more.