Shannon and the Clams scold scuffling fans at The Horsehoe

SHANNON AND THE CLAMS at the. 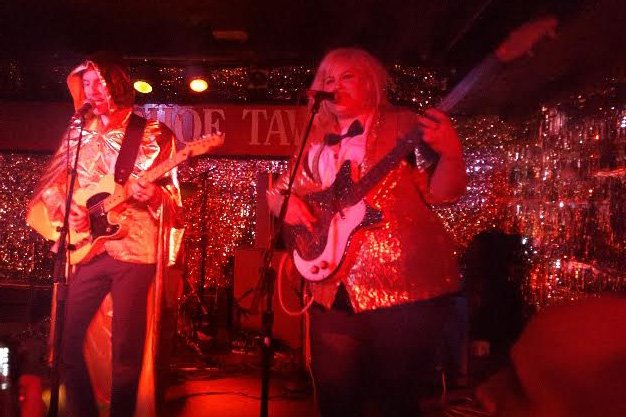 SHANNON AND THE CLAMS at the Horseshoe, Thursday, October 22. Rating: NNNN

Would you pull your hair out to see Shannon and the Clams?

A pair of overexcited concertgoers at the Horseshoe apparently would – only each other’s. When a scuffle broke out due to excessive hair-whipping during the band’s set, bassist/singer Shannon Shaw stopped the show to administer a stern talking-to.

“Would you guys stop fucking fighting?” she implored, sounding so over it.

Dressed in gold capes and jackets that matched the glittery gold curtain on stage, the Oakland four-piece looked and sounded like the house band in an 80s John Waters film. Aside from the scolding, they shared a playful and relaxed rapport on stage that curiously contrasted the wild energy that their highly danceable throw backs to 50s and 60s-era garage-y pop oddities inspired in the packed audience.

Shaw and guitarist/co-singer Cody Blanchard often traded sly smiles as they played songs off this year’s Gone By The Dawn album, including older favourites such as You Will Always Bring Me Flowers and Rat House that allowed Shaw to unleash her crowd-pleasing raspy wail.

Critics' Picks Shannon and the Clams