In the Hot Docs opener, Shawney Cohen discovers that operating Guelph's premier strip club is nothing compared to the family drama behind the scenes 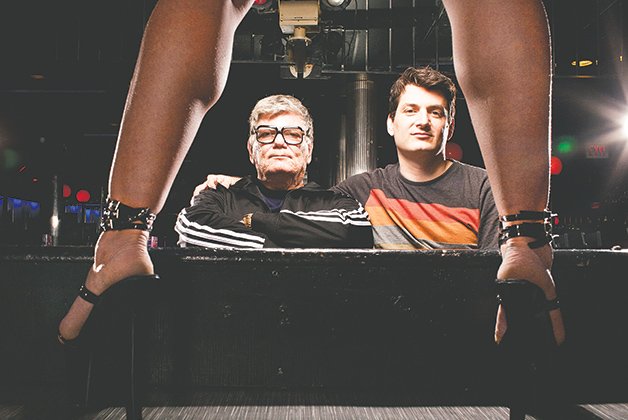 Roger (left) and Shawney Cohen have a sit-down with employee Jersey. 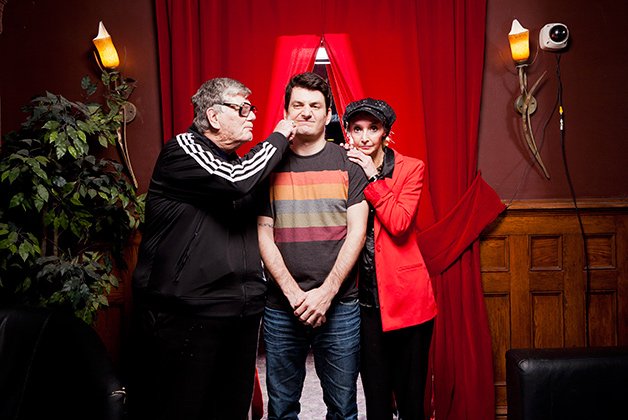 For the last six years, Shawney – a confident, self-possessed guy in his late 30s who flirted with a career in animation – has helped run the place while he figures out what to do with his life. At some point he picked up his camera, started shooting footage of his father at work and never really stopped.

After two years of shooting and six months of editing, the result is The Manor, which opens this year’s Hot Docs. But it’s not just about the nightclub the business serves as a springboard into the Cohens’ complicated family dynamic, which puts the opinionated, inflexible Roger forever at loggerheads with his sons and their mother, Brenda – who has plenty of issues of her own.

“They didn’t quite know what I was doing, or why I was doing it,” Cohen laughs over a smoked meat sandwich and salad at Caplansky’s earlier this month.

“They just thought I was, like, this film student who was just futzing around with a camera. Now that I look back, I think that was probably my best asset, cuz they let their guard down: ‘Whatever. Just let Shawney do whatever he’s doing – it doesn’t matter.’ You get this remarkable access.”

As you might imagine, a strip club is an emotional and visual gold mine for an aspiring documentarian. In addition to the expected scenes of barely dressed dancers, The Manor captures Roger’s paternal relationship with another of his employees, a tattooed recovering addict named Bobby who lives in one of The Manor’s motel rooms.

“At times you feel like you’re living in a Bukowski novel,” Shawney says, “and for somebody who’s artistic, that’s very, very intriguing. I worked a desk job for a while, [but] I prefer working at the Manor because every day something’s different. You just see a side of life you’re not used to seeing. It sounds a bit romantic – in a weird way, you feel like you’re living.”

He can say that now, mind you. It wasn’t always so romantic.

“The first week I worked there, I almost quit,” he recalls. “I tried to break up a fight over a girl in the Champagne Room. Two guys were arguing and I got involved, and I was thrown through the glass door. I wasn’t hurt, but I could have been, and I was thinking to myself, ‘This is insane! What am I doing here?’ But I felt like I needed to stick it out. The bouncers said, ‘Ah, you had your first altercation!’ And I’m like, ‘Yeah?’

“Now it’s almost routine,” he says. “Once every few weeks you deal with a situation. It’s forced me to become a bit more assertive, which I like. I still don’t think I’m very good at my job for the most part I sit in the back office and watch Netflix.”

As a result, Shawney doesn’t give himself a lot of screen time, preferring to focus on his parents and the visual contrast between the morbidly obese Roger, whose attempts to lose weight give the movie its structure, and the dangerously thin Brenda, whom Shawney and Sammy spend most of the movie trying to nudge into therapy for her eating disorder.

“I’m in the film because I have to be,” he admits. “It would have been unfair for me not to be in it – I wanted to take this journey with them – but I didn’t want to put myself in it too much. I think it may have been a different story had I done that. But I like the direction it [took], because I think it’s very much a story about my parents’ relationship. And addiction.”

There was also the challenge of figuring out how to present the staff and clientele of the Manor.

“If someone doesn’t wanna be in it, or they say something – or even if they say they wanna be in it but their parents don’t necessarily know or aren’t cool with it – then I [didn’t] put them in,” he says. “I was very careful about that. You really want someone to be in the film if they’re into it. It’s later when it becomes a problem: ‘Oh, I didn’t know it was going to be a big film.'”

Did he run into any resistance from his family?

“That happened with my brother,” he admits. “He was the hardest person to film. And in the end, when he saw the film, he was like, ‘Wow, I would have been in it more if I knew.'”

Much to Shawney’s surprise, the whole family liked it. Even his father approved of the final cut.

“I think it’s because his convictions in life and in the film don’t change, you know?” Shawney muses. “He thought he was absolutely right in every single situation… [and] I watch the film again and sometimes I think, ‘Maybe he was right.’ When it comes to drugs, not paying for my mother’s therapy, all those things – he was right, in his weird, conservative way.”

“I’ve done this film for Shawney,” the elder Cohen says on the phone from his office.

“I wanted to bond with him – something we never had in the past. For me, that was very important, to bond with my kid, at any cost. Even at the cost of the movie, even at the cost of bringing all my skeletons out of the closet, even at the cost of showing how dysfunctional this business is – although it’s been very good to my family. And to show him, forget the past. I can’t bring the past [back] together. I can’t drive the car looking at the rear-view mirror. That’s past that’s done with. Where do we go from here? I’m your father, I want to help.”

Roger’s drive to help others extends beyond his family, as we see in the film. Over the last few years, he’s turned the motel attached to the strip club into a rooming house for people trying to rebuild their lives.

“He just had this profound idea that he wanted to start helping lower-income people,” Shawney explains. “That’s what I found really interesting about the process when I was filming, how [few] options there are for people who want to rent something under $500. It’s actually near-impossible. So for him to just open his doors [to] people who were a step up from literally being on the street… doing something like that was, I think, a bit more than he thought it would be. Sometimes he’ll be acting like a social worker, but I’ll look at him and think, ‘You’re not trained for this!'”

Shawney’s ambivalence about his father’s outreach program creeps into the film, which gives the scenes of Roger lecturing his tenants about cleaning up and living well a strange tension.

For his part, Roger has no intention of stopping his community work.

“My grand scheme in the future is to downsize the club,” he says, “and to start working [more aggressively] with the homeless. I find it very rewarding. It’s curing my soul, if you will. I’m giving something back, you know what I mean? Piece by piece, I’m putting it together.”

Shawney’s philosophical about the next steps for the Manor. (The movie implies that his dad’s ambitious redevelopment plans for the property are always a few miles down the road, rather than an immediate concern.) He’s just happy to have spent the time with his family, and gotten a little more insight into his dad.

“I think being in the strip club business for 30 years, you know, you grow a thick skin and realize that people aren’t gonna change,” he says, his speech taking on Roger’s world-weary bluntness.

“If you’re a drug dealer you’re a drug dealer if you have an addiction you’re an addict. That’s part of the beauty of the film as well nothing really changes. After this entire experience, I look back and what did we actually learn? We may learn more about each other and we feel more comfortable with each other, but you know, we’re still in a very similar position to where we started two years ago.”