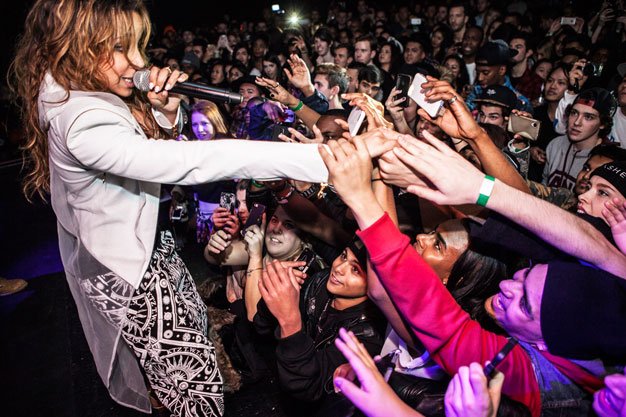 When Tinashe appeared with her face hidden by a surreal, glittering cat mask, it seemed for a moment that the up-and-coming R&B singer was going to take an unexpectedly theatrical approach to performing. But she ripped it off after the first song, switching up that serious vibe for a big, cheerful smile and seemingly limitless amounts of athletic choreography, as if the club gig were a high-production arena tour stop.

Other than her trio of backup dancers, the only other performer onstage was a drummer, but that minimal amount of live playing still breathed life into the pre-recorded backing tracks. Without some of the heavy studio processing that often shrouded her voice on her debut album, Aquarius, Tinashe revealed a more muscular tone than her recordings suggested she was capable of. She has an easy confidence and lots of charisma, but by the set’s second half it was clear that her catalogue of songs can’t yet sustain the energy needed for an entire performance.

Justin Timberlake returned to pop music last year with the two-part album The 20/20 Experience, a forgettable effort full of warmed-over lite-disco-funk and cornball come-ons. Its songs fare better when the 33-year-old is swivelling his pelvis in person.

Casting himself as a kind of nightclub orchestra leader, Timberlake and his band, which included two drummers and a horn section, played a high-energy set that emphasized musical versatility without totally abandoning the ravey laser lights, backup dancers and cutting-edge technology you’d expect from a pop star self-styled as Michael Jackson’s heir apparent.

The set list drew from his four albums plus stripped-down renditions of Elvis Presley and Jackson hits. The Suit & Tie singer is charisma incarnate, moving with smoothness and ease. The band, meanwhile, has clearly been at it for a while, switching up arrangements mid-song. My Love went from slinky electro-funk to twinkling piano ballad to Santana-style rock soloing, but such flourishes were overwhelming and unnecessary.

Timberlake seems caught in a transitional phase between pop star and Serious Band Leader with Prince-style funk revue leanings, but his material lacks the gravitas needed for such treatment. Fortunately, he still has pop star charm.

Common and Jay Electronica, two of the most respected MCs in hip-hop, share a predilection for introspection and poetry, but their performance styles differ vastly.

It’s been four years since Electronica polled the audience at a free Yonge-Dundas show about choking women during sex. The New Orleans native’s long-awaited debut LP is still long-awaited, and, absent any new controversy, this final hip-hop show at the soon-to-be-shuttered Kool Haus was nearly identical to his past gigs. He wasted no time jumping into the crowd and inviting delighted fans onstage as he spit his searing a cappellas.

While Electronica erases barriers between audience and performer, Common is earnestly theatrical. At times, the Chicago MC’s near-two-hour set was more like a one-man show as he acted out skits and recited monologues about police violence, the late producer J Dilla and his purpose in hip-hop as a man of the people.

It also featured a DJ scratch battle, a freestyle serenade to a female fan, a crowd-pleasing freestyle about Toronto (that referenced Rob Ford and DeMar DeRozan, and likened his bald head to the SkyDome) and beautiful vocals by singer Maimouna Youssef.

There were moments that dragged, but the set had such a feel-good, classic vibe and pristine sound that it was hard not to get caught up.

The first of Timber Timbre‘s intimate shows at Lee’s Palace felt like a comfortable easing in to the three-date run – nothing too explosive or exciting, but definitely solid and engaged.

It was an inward-looking performance, much like lead man Taylor Kirk‘s sound and persona in general. The musicians played in near-total darkness aside from soft illumination by four neon sign backdrops that created the ambience you might find in an off-the-beaten-path blues bar with a few pool tables in the back. Or a strip club on a quiet night. Kirk said very little to the adoring capacity crowd.

He has a terrific band, which halfway through the set included saxophonist Jeremy Strachan adding touches of noise to the blues-psych-folk tunes (mostly from recent Hot Dreams and 2011’s Creep On Creepin’ On) and enhancing the already brawny bass end and Kirk’s baritone vocals. Arrangements were thoughtful: warm, dreamy, muted. Softly tapping piano. Brushed snare drum. Slow builds. When the club’s disco ball started up for superbly executed Hot Dreams, it was the perfect touch.

Sean Nicholas Savage‘s opening set left something to be desired. The Montreal singer/songwriter’s minimal, electronic pop (in trio format) is interestingly warped and eccentric at times but bloodless and unpinned to any real foundation.