ELLIOTT BROOD at the Tiny Record. 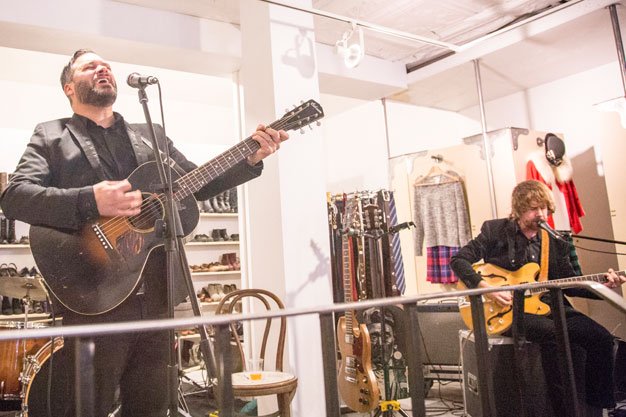 1) The acoustics can be quite good in vintage clothing boutiques.

2) It’s still possible to stomp along to Jigsaw Heart, the rollicking feel-good single from the band’s most recent album, Work And Love (Paper Bag), between racks of sweaters and high-waisted jeans, and babies wearing oversized headphones. (Guitarist/vocalist Casey Laforet‘s two youngsters were also hanging out in the back of the small room, far from the rumbling speakers.)

After more than 10 years of playing together, Elliott Brood are as tight as ever. Clad in black, the trio whipped through a six-song set heavy on the mature, alt-country jams of their latest LP. Despite the tight quarters, they didn’t hold back: lead singer Mark Sasso‘s signature raspy croon shook the space during twangy Nothing Left, and Laforet pulled no punches on his amped-up guitar.

The set was short and sweet – the perfect appetizer for the band’s headlining gig at the Phoenix on January 24, which will likely have 100 per cent fewer babies and 100 per cent more beer.

For New Country Rehab‘s January Dakota residency, the Toronto four-piece are joined by a guest every Wednesday to play songs by someone else. At the first one, they warmed a cool, toqued crowd with two dinnertime sets, the second of which featured piano man Devin Cuddy singing Randy Newman songs and more.

The band – with new guitarist Mike Tuyp and bassist Alistair Whitehead – used the opportunity to try out new material, Blair Mountain Valley and a song about Pretty Boy Floyd. Original members fiddler/lead singer John Showman and drummer Roman Tomé have real synergy, singing and moving in tight unison. The newbies began to gell, too Tuyp’s guitar-playing shone during a bluegrassy, electrified solo in an instrumental song.

For the second set, Cuddy started solo with Newman’s It’s Money That I Love before being joined by NCR on his ragtimey tune I Got A Girl. But it wasn’t until a cover of Fred Eaglesmith’s Katie, followed by NCR’s The Last Hand, that the music took flight.

Unexpectedly, only a handful of Newman songs were heard, making the night less a tribute to an artist than a collaborative sharing of influences between musician friends.

The days of the sprawling band collective are over, if the January edition of Long Winter is any indication. Three members or less, it seems, and the more screaming feedback the better.

Downstairs, Soupcans gave it their all while a mosh pit roared. On record, their roiling noise punk has a menacing edge, but live it’s more lighthearted due to singer/guitarist Dave Evans‘s twisted facial expressions, herky-jerky yelping and amicable banter. He doesn’t use a pick, instead splaying and twisting his fingers across his strings to much squealing, bending and chaotic effect.

Danny Tenaglia cut his teeth in the era of DJing when you were expected to play an eclectic selection all night (and often well into the morning) rather than bash together two-hour festival sets of current bangers. His performances regularly last more than 10 hours, and occasionally even twice as long. That his fans match him in endurance puts him in a unique class among the big-room DJs of the world and makes him an ideal person to take the reins of the Guvernment‘s massive sound system as part of the mega-club’s month of closing parties.

Since Tenaglia had until at least 10 am to play everything he wanted to, there was none of that frantic bouncing between tracks common among the younger generation of EDM superstars. Instead, he let each song breath, and milked the suspense in the transitions between tracks to the point where each new one felt like a release when it kicked in. Despite being known for a very specific brand of chugging NYC tribal house, he enjoys such broad appeal due to the surprising diversity of his selections and the tension between his soulful tendencies and mind-melting techno excursions.

It’s a rare talent who can make the vibe on the dance floor more intense at 7 am than in most clubs at 2 am.