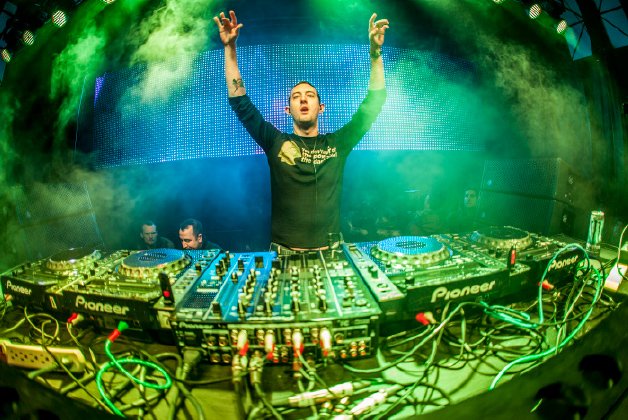 The Arctic temperatures Toronto’s been experiencing of late held off for the second annual outdoor EDM festival, Brrrrr! Unfortunately, the weather was still heinous.

Because there were only two stages, you could see every performer (11 total) if you were inclined to – and close by, hot-drink huts, ice bars and Beaver Tails shacks gave the event a wholesome, village-like vibe.

You’d never know how wet the weather was from the way the crowds gamely stuck it out. Granted, they had help: Dutch duo Bassjackers lived up to their name with rumbling beats that could truly warm from the inside out.

In the Technodome – a spherical tent that looks like a cross between an igloo and Epcot – Chicago deep house DJ/producer Lee Foss was dropping soul vocals into a steady beat, playing on for a blissed-out group before passing the decks over to Sharam.

Outside, Wolfgang Gartner showed how he’s cultivated such a faithful fan base. Take, for example, one 10-minute chunk of his set: he teased out the signature sample from Biggie’s Hypnotize, leading into a spell of hip-hop before unleashing a gigantic buildup and abruptly launching into a completely different direction.

There’s an art to pulling off an hour-long spoken word performance, and Leanne Simpson has mastered it. In St. George the Martyr Church, otherwise known as the Music Gallery, an elder said a prayer, Peterborough singer/songwriter Nick Ferrio played two winning tunes, and then the Peterborough author, activist and academic took over with short stories from her book Islands Of Decolonial Love, reworked as spoken word poems and songs.

Engaging and conversational, she paced the set perfectly, beginning with the emotional title song that saw her joined by a four-piece band. (She and pianist/singer Tara Williamson harmonized beautifully.) The focus then moved to Simpson’s writing, sometimes unaccompanied, sometimes set to live or pre-recorded music. Simpson’s ancestry is Mississauga Nishnaabeg, and her vivid stories explore the lives of modern-day indigenous people.

No one seemed ready for her to leave the stage, so it was something of a comedown to have the night end with other musicians. Sean Conway, also from Peterborough, played a couple of original country tunes, and then Williamson brought things to a close with songs that swung between lounge, jazz, pop and musical theatre.

Dom Kennedy’s first visit to Toronto has been a long time coming – like, half a decade (the L.A. rapper’s been on the scene since he dropped his 25th Hour mixtape in 2008). Consequently, prior to showtime the Hoxton lineup wrapped around the block.

Early-scheduled hip-hop shows are rarely in fact early, but because of another event at the venue later that evening, Kennedy emerged at 9 pm, wearing his classic L.A. Kings Gretzky jersey, and wasted little time on banter – a necessity since his set clocked in shy of an hour.

While material off his latest studio album, Get Home Safely, was received warmly (especially Still Callin’ and Pleeze), people went nuts for songs from the Yellow Album mixtape (My Type Of Party, We Ball) – Pacific Coast driving music at its finest.

The only problem was the set’s brevity. Kennedy’s material is fun, easy and free-flowing, and onstage his natural charisma and laid-back demeanour shine. With good vibes flowing, it sucked to have to snap out of it so soon. The crowd wasn’t ready. On the upside, it won’t be six years till we see him again. Before telling everyone to get home safely, Kennedy promised to return in 2014.

PREFUSE 73 with NOSAJ THING and FALTYDL at the Hoxton, Friday, January 31.

Brooklyn producer FaltyDL sounded almost apologetic as he mumbled into the mic that he was playing the last song of his opening set of moody, drum ‘n’ bass-inspired downtempo – a sign that this was not going to be a night of extroverted fist-pumping.

Next up, Nosaj Thing started out very ambient and experimental before launching into some heavier abstract hip-hop grooves, his hands dancing all over his gear as he chopped up and reworked his tracks. However, the crowd only really responded when he dropped in Kendrick Lamar’s Money Trees at the end of his set.

Prefuse 73 made less of an attempt to play to the Friday-night crowd, instead walking the fine line between experimental and easy listening, which may have pleased his more hardcore fans but pretty much cleared the dance floor.

The Hoxton is a much more pleasant club to be in when it’s not overcrowded with amped-up EDM bros, but a half-empty room of sedated IDM beat heads is a little too far in the opposite direction. Much as we enjoy the recorded sounds of the three artists, the live experience could use some work.