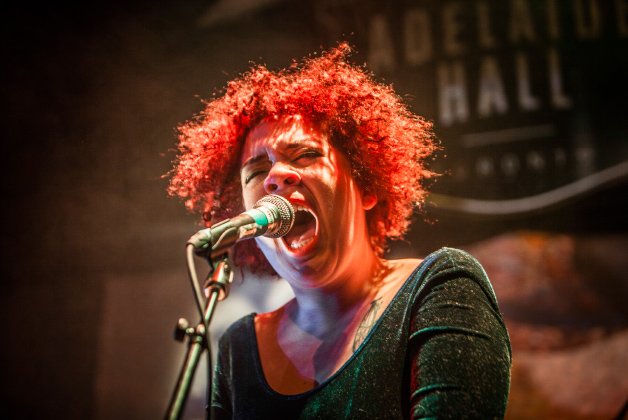 Fourteen years ago, Wavelength threw its first show at the now-defunct Ted’s Wrecking Yard, the venue that would become the festival’s first HQ.

Openers You’ll Never Get to Heaven, from London, Ontario, are a dreamy electro duo who are mesmerizing on record but a bit stiff live.

Montreal import Alden Penner played a sweet, short set mostly from his just-released LP, Exegesis. His acrobatic voice floated throughout, acting as a calming musical balm before the chaos that is Zoo Owl.

The crowd – now revved up – cooled back down for Arbutus group TOPS, who were confident and tight with their dreamy 70s-meets-80s synth pop. Jane Penny’s lead vocals sounded a bit shaky, but she looked commanding onstage.

Well past midnight, Toronto’s own Phèdre finally took the stage. The experimental band’s live show is best experienced up close where you can dance/mosh/flail to April Aliermo and Daniel Lee’s electro-psych.

On Friday at Adelaide Hall, Marnie Stern’s last-minute cancellation due to a snowstorm only proved that there’s as much excitement for local music as for New York City headliners. Weaves got the crowd onside with a short set of weird pop songs built around wildly wailing guitar-and-bass interplay and Jasmyn Burke’s equally free-wheeling melodies.

Odonis Odonis are all noisy, industrial-tinged post-punk power, with brief songs built on gang vocals, heavy-steady bass lines and a minefield of effects pedals. It’s hard to tell if the songs would still be there without all the digital magic, but the overall effect is propulsive and head-nodding – so much so that DIANA’s smooth and saxy soft rock, while more diverse and crafted, seemed like an ultra-lightweight end to the night.

On Sunday, the Garrison was still packed and lively for a solid closing-night bill. Brass-fuelled Edmonton rock ‘n’ roll dance-pop five-piece Wet Secrets were super-weird and so much fun. Marching band costumes, coordinated dance moves, animal noises and big, juicy anthems more than made up for any slightly off-pitch harmonies.

Bouncy transitioned to blistering when noise rock quartet Greys exploded into their set. (It was hard to believe they were the same guys who casually sauntered onstage.) We wished lead singer Shehzaad Jiwani’s mic had been turned up just a smidge, but Greys’ enthralling musicianship earned them a mosh pit on their last tune.

San Fermin is the brainchild of 24-year-old Ellis Ludwig-Leone, a Brooklyn-based songwriter who studied composition at Yale and wrote the group’s debut album during a Banff Centre residency. It’s a meticulous and romantic work of baroque pop, full of emotional and musical complexities that grapple with post-collegiate existential quandaries.

His millennial optimism proved infectious at the Garrison, where San Fermin won uproarious cheers with swelling crescendos, swooping choral harmonies and go-for-broke sax solos. Whittled down to eight players from the album’s 22, the band looked cramped onstage but didn’t sound it. Ludwig-Leone held court from the side of the stage on keyboard, ceding the spotlight to suave baritone Allen Tate and freewheeling soprano Rae Cassidy.

Tate is a mannered and precise vocalist compared with Cassidy, who added some R&B swagger to her operatic range. Their interplay was a microcosm of Ludwig-Leone’s primary challenge: infuse the album’s tightly arranged interlocking parts with rock ‘n’ roll looseness. The band sometimes sounded a bit too loose, but made up for it with unwavering showmanship and energy during the hour-plus set that included album cuts, new material and a cover of the Strokes’ Heart In A Cage.

Briar Rabbit has been heartbroken. A lot. That much was obvious at the Drake Underground Sunday night.

But neither that or the unfortunately teeny crowd dampened his sense of humour. Alone onstage with his acoustic guitar, Rabbit was quick-witted and self-deprecating. What initially came across as shticky turned out to be laugh-out-loud funny from one of the wittier banterers in the biz. (If the music thing doesn’t work out, he has a future in musical theatre.)

His voice (think Steven Page with a hint of Adam Duritz) was strong and true, if a little flat when he reached for the highest notes. A clever and heartfelt lyricist, Rabbit’s sometimes painful honesty seems genuine, salvaging it from over-earnest oversharing. (He told us his aunt advised him to sell his song Lock Up Before You Leave to Taylor Swift. Solid advice.)

Early in the set he covered Otis Redding’s (Sittin’ On) The Dock Of The Bay, which suited him well. A little more soul, blues and camp would be very welcome additions to his folksy campfire-worthy originals.