THE BEVERLEYS with GREYS and MEXICAN SLANG at Sneaky Dee's, Friday, February 28. Rating: NNN With scream-singing, there's a fine line. 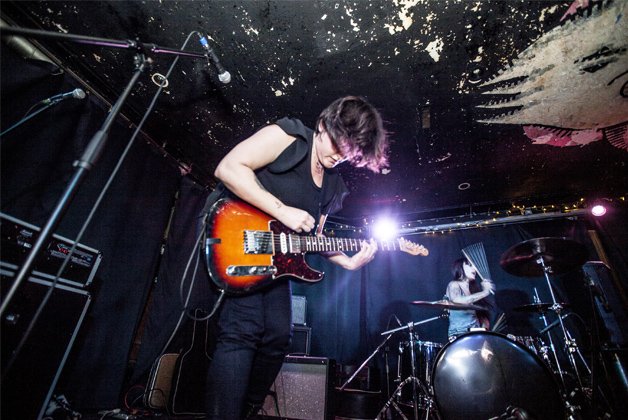 The Beverleys at Sneaky Dees

With scream-singing, there’s a fine line between sounding ferocious and just being grating, and, thankfully, both of the Beverleys’ vocalists fall on the right side of that spectrum. At their best, the Toronto trio are reminiscent of Hole’s hook-heavy grunge pop (before Courtney Love became a little too much to deal with), but more controlled and more influenced by the ongoing garage rock revival. Their sound is primitive and raw, but the songs are well-written enough to stick in your head a long time.

While it was the Beverleys’ EP release party, many in the crowd were clearly hyped for the post-hardcore shout-along riffs of Greys, who inspired mild-mannered moshing. Their sound isn’t particularly groundbreaking, but their onstage energy was contagious and they were impressively tight. Grunge revivalist openers Mexican Slang didn’t get quite as enthusiastic a reception, but singer/guitarist Annabelle Lee has promising stage presence, and the songs show potential.

The same day NXNE announced its second round of programming, the fest threw a free concert at the Garrison.

Despite their cool, feedback-rich, guitar-fuelled sound, it was hard to get into laid-back alt rock four-piece Wish, especially with their sometimes unconvincing vocals. In contrast, Michael Rault and his band played energetic, bluesy, Kinksian retro rock that was nearly impossible not to dance to. The decidedly more dramatic Fresh Snow were (mostly) obscured by a translucent white sheet upon which light patterns were projected, so you could really focus on the musicianship behind their textured, squalling, experimental rock.

They’re a tough act to follow, but Carmen Elle’s charisma beats almost anything. As much as we love her fronting DIANA, that outfit’s synth pop grooves don’t allow her to show off her explosive guitar chops the way garage-pop duo Army Girls can. Not to mention the full force of her pipes. She seems much more natural in this configuration with drummer Andy Smith.

DEAFHEAVEN and BETWEEN THE BURIED AND ME at the Phoenix, Friday, February 28. Rating: NNN

As the debate continues as to whether Deafheaven are actually black metal, the San Francisco five-piece turned a “deaf” ear and played an impassioned set to a full house at the Phoenix. On a dark stage, founding members Kerry McCoy on guitar and George Clarke on harsh vocals held our attention most, the former for his Nothing Was The Same T-shirt and the latter for his theatrical, black-gloved gestures.

Deafheaven’s songs start at the swell of a crescendo – shoegaze guitar walls and barrages of double-bass drum – and only come down for soft and moody clean guitar interludes. Those brief breaks were welcome live, shaping an otherwise monolithic sound. Kids upfront tried moshing but soon realized the music was too contemplative for that.

When Clarke announced the last song, a man beside me in a Between the Buried and Me jacket said, “Thank god.” Deafheaven and headliners

BTBAM, you see, are an exercise in contrasts. DH are minimalist songwriters, while the North Carolina prog-metal quintet never pass up a chance to change time signatures and genres, woodshed guitar solos and dole out synth breakdowns and intergalactic visuals.

Exhausting, but fans of their recent album loved it. Bodies flew, dove and surfed.

A lot has happened in Phantogram’s world since their last Toronto gig. After releasing their debut album in 2009, duo Josh Carter and Sarah Barthel signed to a major, released the follow-up, Voices, and are now touring as a four-piece.

Though technically impressive, neither is a particularly distinctive singer, and they relied on effects and reverb to give their arena-sized melodies nuance and emotional resonance. Of the two, Barthel is the natural frontperson. Her bob cut a dramatic silhouette as she belted out crowd-pleasers like Don’t Move and Mouthful Of Diamonds. But despite the professionalism and poise, Phantogram still need that one big song to really take their set over the top.