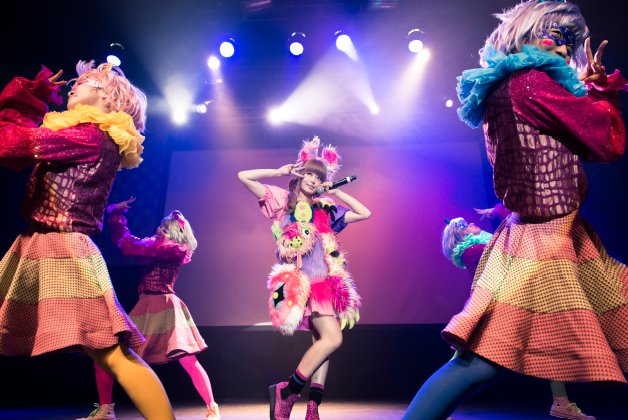 Everything about Kyary Pamyu Pamyu is on fast-forward.

For the uninitiated, watching the 21-year-old fashion-blogger-turned-J-pop-sensation perform is a mind-melding experience that is OTT for even the most seasoned pop and psych fans. But for her legions of costumed devotees she offers a heartwarming escape into childlike innocence.

In a furry rainbow-coloured petticoat, Kyary made her Canadian concert debut to deafening screams that she handily drowned out with a 90-minute set of intense club beats accented by cheery melodies and camp instrumentation (cowbells, surf guitar, magical chimes, bagpipes, piano glissandos, car motors – you name it). The vibe evoked video game music, candy raver culture and the withdrawal sequence from Trainspotting in equal measure.

She made up for a bare-bones set-up with rigorous choreography alongside four sparkly dancers wearing maniacal expressions. Highlights included Kyary An-An, which sounded like a sped-up version of Hey Mickey and featured a chicken dance routine, air guitar and multiple slide whistle solos the thundering Mi, which could almost pass for Middle Eastern wedding techno and new single Hajima Ring Ring, a wistful, discofied ballad that would go nicely with a circa-1981 Hi-NRG Pointer Sisters club remix.

Toronto boasts a bunch of NWOTHM-leaning bands that travel the world yet can barely fill the Bovine back home. But if the number of rambunctious bodies filling the Mod Club for Skull Fist’s Chasing The Dream album release party are any indication, local support for the scene is on the rise.

The power metal four-piece blazed through speedy tunes from their two albums, with raven-locked singer/guitarist Jackie Slaughter getting the crowd singing along to No False Metal and the righteous Head Of The Pack.

Only once did he break from guitar shredding and Halfordian levels of wailing – for an oddly straightforward cover of BTO’s Takin’ Care Of Business. Then it was back to carrying second axe slinger Jonny Nesta on his shoulders and, later, crowd-surfing on his back while soloing.

Despite touring Europe for the last month, the band had energy to burn, thanks in part to the night’s good vibes. “I never thought I’d see this in Toronto!” exclaimed Nesta.

Earlier, local four-piece Fatality played a high-energy set of thrashy songs with complex structures that beg to be listened to on record. They were tight, tight, tight.

“There’s a rock show going down in the pool,” someone answered. He walked away with a bewildered grin.

It was an understandable response given the concept: experimental hometown boys Absolutely Free playing a release show for their latest EP, On The Beach, at the JCC’s pool.

After 15 minutes of swimming, the band started their hour-and-a-half set. Surprisingly, their effects-heavy electronic sound worked wonders with the acoustics. All the natural reverb, perhaps?

The swimmers splashed along as the band, on a second level overlooking the pool, eased through the EP and other unreleased tracks. Even if it seemed at times like the swimmers weren’t listening, a roar of applause erupted after each song. It was great, even heartwarming, to see Toronto concertgoers having, well, fun. And who knew? All it took was a rock show at the JCC to bring us out of our shells. See you at Passover?

Alvvays are two women and three men – Cape Bretoners and Prince Edward Islanders – who ripped through a punk song one minute, pulled off reverby rock the next and then floated into beachy California pop. If you were listening closely, there were also Celtic hints that nodded to classic Maritime music and channelled, ever so subtly, the Cranberries.

The night’s best song, Adult Diversion, most exemplified their lo-fi jangle pop (even if the frank, funny lyrics were barely decipherable). By the time they encored with Archie, Marry Me, they’d got numerous shouts of tipsy admiration from the otherwise well-behaved room.