DEATH at the Phoenix, Friday, March 21.. 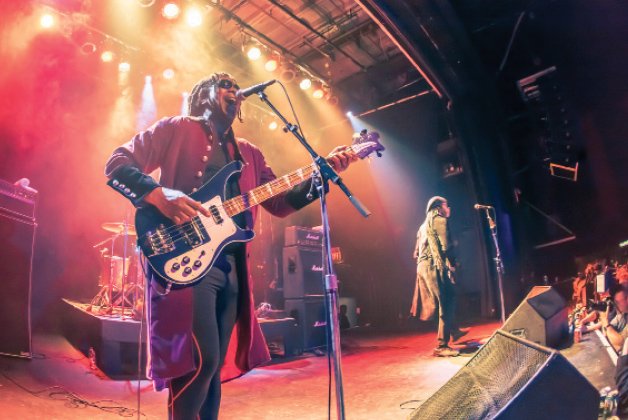 Death at the Phoenix

It’s beyond me why the Phoenix was half-empty for Death’s first-ever appearance in Toronto, especially since the Detroit proto-punk trio have one of those tragic music documentaries attached to them.

Drawing inspiration from their Motor City brethren the Stooges and MC5, Death play raw, spirited rock but with much more funky soul and seriously unexpected musical tangents than either of the above. They were in fine form at the Phoenix, brothers Dannis and Bobby Hackney and guitarist Bobbie Duncan, all in shades, locked in and exuding warmth and happiness, especially whenever the crowd chanted, “Detroit! Detroit!” (which was often).

Their songwriting is spotty, though. The obvious standouts all came from the brilliant For The Whole World To See, culled from an aborted mid-70s album attempt and released by Drag City in 2009.

Singer/bassist Bobby made sure to acknowledge his deceased brother and Death founding member, David Hackney – the band’s visionary – several times. That was also a reminder, though, especially in light of tepid songs from a forthcoming album, that the band will never be as good without him.

Long before it was de rigueur for electronic music producers to eschew DJing for live performance, Toronto-born techno head Fairmont (aka Jake Fairley) was banging out beats in local clubs using a messy tableful of drum machines, synths, filters and tangled cables. That offbeat approach has led to a nomadic lifestyle that finds him based in Barcelona these days, but a winter visit home resulted in a series of low-key local shows over the past month.

Fairley’s productions and performances under the Fairmont moniker were always more melodic and indie-rock-inspired than your typical techno. But he’s funnelled his new wave tendencies into his Bishop Morocco side project duo in recent years, allowing him to focus on the dance floor in solo material. Unfortunately, both the promoters and the venue for this hometown gig seem to be going through a transitional phase, which made for poor turnout and low energy despite hook-heavy melodies, atmospheric vocals and throbbing bass lines.

Local sock-hoppers Meanwood captivated Saturday’s loose crowd with a raucous, blues-heavy set. Lead singer Viktoria Belle was part Janis Joplin, part Rachel Nagy and all charm. Her throaty snarl was a force, and when she jumped into the crowd to shimmy with those up front, the rest of theSilver Dollar was visibly jealous. Both guitarists treated their monitors like personal launching pads, standing atop them for those in the back to see.

Sitting alone behind a kick drum with his guitar, Montreal-based garage rock veteran Mark “BBQ” Sultan fired off a plethora of back-catalogue hits (including standouts he’s performed with King Khan like Waddlin’ Around). By this time the crowd had become sloppy between their overt makeout sessions and scuffles, Sultan provided running commentary.

In turn, his approach became sloppy as he rushed through his remaining tunes. But you got the feeling that that hedonistic atmosphere is what Sultan thrives on. Until it put his monitors at risk.

“I’m not Pearl Jam,” he barked. “You want to be jocks, you want to mosh, you piece of shit? Get out of here. Police yourselves.”

Before Real Estate came out for their sold-out show at the Opera House, a towering, clean-cut man walked onstage. It was Jay Onrait, the former SportsCentre broadcaster turned Fox Sports Live anchor turned self-proclaimed Real Estate groupie. With his booming voice, he introduced the guys one by one – as though they were football stars – which proved funny once the five bespectacled dudes in casual sneakers appeared.

The Brooklyn-via-New Jersey band opened with a couple of songs from their fantastic, just-released LP, Atlas, before cruising through older, timeless singles from their repertoire. The band’s hazy, sun-speckled sound was pretty much a facsimile of their records (even live the keyboards and drums are buried under layers of guitar). But lead vocalist Martin Courtney’s voice sounded crisper and more confident in concert, a bonus for anyone singing along.

While they weren’t afraid to indulge their jam-band spirit in instrumental extensions – which meandered between the whimsical, the psychedelic and the boring – the band was most convincing playing hits like Easy, It’s Real and recent single Talking Backwards.