KRAFTWERK at the Sony Centre for the. 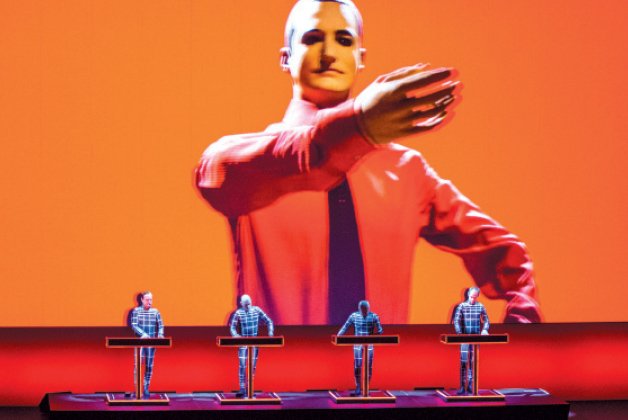 Kraftwerk at the Sony Centre for the Performing Arts

KRAFTWERK at the Sony Centre for the Performing Arts, Saturday, March 29. Rating: NNNNN

It feels counterintuitive to talk about what a great live band Kraftwerk are. After all, they barely move onstage, and it’s entirely possible that much of the music they performed was prerecorded. Those factors seem pretty insignificant, though, compared to the larger experience of watching the seminal electronic group playing to an adoring room of fans while impressively executed 3D visuals swirled around them.

Back when the tour was announced, the 3D aspect seemed like a kitschy joke, and to some extent it was. Kraftwerk have always toyed with humour and seem to enjoy the cheesy aspects of technology and futurism. But they also take their music seriously enough to put together an extremely well-produced concert experience that sounded as amazingly three-dimensional as the projections looked. Old hits were beautifully reinterpreted without losing any of their original charm. The only part that didn’t go perfectly according to plan was when a super-fan attempted to rush the stage at the end before being tackled by security.

There are certain musicians everyone should catch in concert at least once. Andrew W.K. – born Andrew Fetterly Wilkes-Krier – is one of them. By the end of his set at the intimate Hard Luck Bar, over half of the crowd was onstage with him, shouting along to Party Hard and I Get Wet while he pounded away boogie-woogie-style at his keyboard, completely invisible.

The party rock anthems, while decent enough, play second fiddle to the New York-based musician’s guiding motto that everyone should live life to the fullest at every moment.

He embodies YOLO culture, so it was no surprise to see so many college-aged kids there. Wilkes-Krier stuck to his piano most of the night, screaming through a distorted mic along to canned drums/bass/guitar.

The highlight was an unexpected tribute to Gwar, another band everyone should see at least once but probably no longer can. Singer Dave Brockie passed away on March 23.

“Isn’t it good to be alive?” said W.K. afterwards. “Life is very intense, but we can still have fun, right? Because we team up together to stay strong and mighty. Never mistake a bad day for a bad life.”

The riffs came loud and heavy at the Horseshoe at Biblical’s album release party, assaulting ears and making bodies rock. The band’s newer tunes leave behind some of the garage/hard rock tendencies heard on their 2011 EP for the slowly unfurling, gothic quality of full-length Monsoon Season, which has been gathering positive reviews since its release earlier this month.

Nick Sewell’s impassioned vocals and bludgeoning bass lines guide the proceedings away from too much psychedelic jamminess, though that happens, too, less excitingly. In unassuming hoodies, the local four-piece made up of T.O. music scene old-schoolers seemed stunned to find themselves playing for a full room of attentive fans, who ate up epic tunes like Traitors and Second Sight.

But bands should start getting nervous when they invite Public Animal to open for them. The Ian Blurton-led foursome have a knack for overshadowing the headliners with their supersonic hard rock songs, no-holds-barred delivery and dazzling man/woman harmonies. It’s a superbly invigorating and catchy sound, leaving us dying to know when their record release party is going to happen.

Miley Cyrus came out guns blazing to her Britney Spears collab, SMS (Bangerz), parachuting down a tongue slide that hung out of a giant, projected Miley face. In a red gingham two-piece and cowboy boots, she frolicked with furries and backup dancers of all shapes and sizes.

There was ass-slapping, twerking, pelvic thrusting and, yes, tongue-wagging and, in between songs she called us motherfuckers, caught bras from fans, spat water on the audience and encouraged girl-on-girl makeouts. Phew.

Cyrus did let her guard down for a few slower covers, including Dolly Parton’s Jolene, perfect for her deep, country-strong voice. In fact, without a lick of backing track, she capably ploughed through two hours of mostly mid-tempo songs.

For a finale, she mounted a giant hot dog like a mechanical bull. “Love is patient, love is kind, love is helpless,” she sang – all whilst straddling an oversized wiener.

That said, she encored with two of 2013’s best pop singles, We Can’t Stop and Wrecking Ball, and then, as people were filing out, burst out with yet another encore – Party In The USA – accompanied by dancers dressed up like Mount Rushmore, the Statue of Liberty and Abraham Lincoln, eliciting the night’s loudest, most piercing shrieks.