THE UNDERACHIEVERS with DILLON COOPER at Tattoo, Sunday, April 6. Rating: NNN It makes sense that the Toronto stop of the. 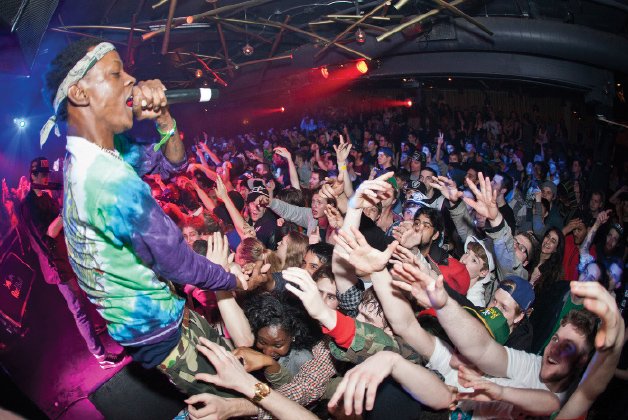 The Underachievers at Tattoo

It makes sense that the Toronto stop of the Eyes Of The World tour was an all-ages gig: the performers were all barely over twenty themselves.

But as game as the packed room was for that opener, they lost their shit when the Underachievers’ Issa Gold and AK emerged.

Some of the psychedelic production subtleties got buried either by the loud crowd or the sound mix, they seemed a little off-beat on their best-known single, Gold Soul Theory, and their delivery was forced sometimes, like they were trying to yell over the crowd instead of letting the mics do their job. (The guys have such a nice flow on record.)

But what Issa and AK lacked in technique they made up for in fan appreciation – blunt-sharing, near-constant high-fives and handshakes. One girl even crowd-surfed her way onto the stage.

Pretty turnt up for a school night.

Even at his most upbeat, his songs are soft and delicate, so the overly chatty audience at the Danforth Music Hall was very distracting, even for those seated near the stage. A surprisingly large number of battles between shushers and loud talkers echoed around the room. The unfazed McMorrow handled it well, though, casually joking with the crowd between songs.

He and his three-piece backing band sounded pristine, flawlessly reproducing the angelic harmonies of his recordings. Both his folkier tendencies and the electronic elements translated well to the stage, though the occasional rock-out moments seemed out of place.

No disputing his talent, but his back catalogue isn’t big enough to fill a long set with pure gold. If he’d cut the set list down a bit, the audience might not have been so restless.

The 75-minute set mixed cuts from the Julie Ruin’s Run Fast and Hanna’s 1998 Julie Ruin solo album with material by Bikini Kill and Le Tigre, and was heavy on wry banter the crowd ate up. “I’m from the time of Dr. Quinn, Medicine Woman,” she deadpanned to a 21-year-old fan at the foot of the stage.

Meanwhile, Hanna either did not see or chose not to acknowledge a banner dropped by trans activists asking her to address the Michigan Womyn’s Music Festival’s policy against admitting transgender women.

Politics aside, the Julie Ruin brought robust energy to the stage that Hanna matched with equally clear and forceful vocal delivery. The back catalogue covers rarely sounded as tight and together as the new songs, and Run Fast is more ambitious in scope than Hanna’s older material.

As soon as the Phoenix’s overhead lights dimmed, a reverential hush fell over the crowd. Amethyst beams illuminated the stage, revealing three silhouettes. And then came Hannah Reid’s voice: it dramatically croons and whispers, then soars to incredible heights before plunging into deep, sensual growls.

She was flanked by guitarist Dan Rothman and Dot Major, who played keyboards, drums, synths and djembe, but Reid’s voice was the London-based trio’s not-so-secret weapon. Florence Welch comes to mind, but Reid’s pipes are wholly her own.

London Grammar’s hour-long set showcased the reverb-heavy electronic pop found on their enormously popular debut, If You Wait, released last fall. It felt short, but the band played everything they’ve got, including a vocal line from Help Me Lose My Mind, Reid’s collaboration with Disclosure. Opener Hey Now was an airy slow burner that elicited goose bumps, while Wasting My Young Years provided the most dramatic moment of the night: as soon as the climax hit, the song faded, leaving Reid crying out repeatedly, “Don’t leave me hanging on.”