THE WAR ON DRUGS at the Horseshoe,. 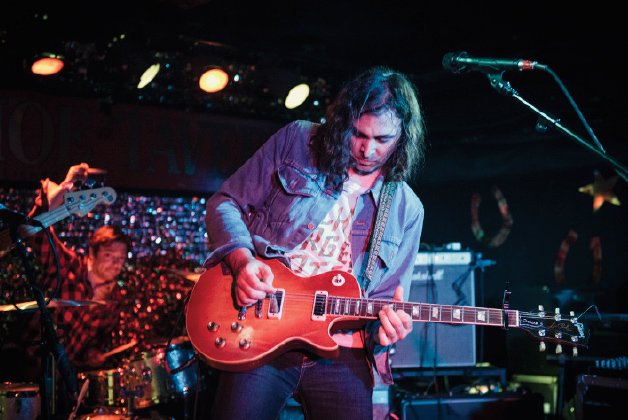 THE WAR ON DRUGS at the Horseshoe, Monday, April 14. Rating: NNNN

The Horseshoe was packed shoulder-to-shoulder for the first of two intimate, sold-out War on Drugs shows, fans craning to catch a glimpse of the Philadelphia Americana psych-rockers led by a jean-jacketed Adam Granduciel, who looked happy and at ease (and not just a little like Eddie Vedder).

Tunes from their acclaimed new Lost In The Dream album and 2011’s Slave Ambient made up the gently expanding two-hour-plus set, which started out slowly, kicked into high gear soon after with Under The Pressure and the blissfully kinetic Red Eyes and then dipped in energy for a more ambient, hazy second half.

Granduciel gave shout-outs to Soundscapes and Paul’s Boutique, and local sax hero Joseph Shabason added pealing horn lines to the loose and inspired guitar solos, humming organ textures, steady groove bass and always propulsive backbeat. Granduciel got spontaneous for the four-song encore, standing his Les Paul on its head in front of his Marshall for feedback and then tacking on a cover of John Lennon’s Mind Games that got the thinned-out crowd (it was 12:30 am on a work night by then) literally screaming.

Kicking off a three-night stand at Massey Hall, the National didn’t let the sit-down venue hinder their wine-spitting, mic-stand-throwing, crowd-moshing live show. In fact, lead singer Matt Berninger gushed that the hall was the site of some of the Brooklyn band’s most memorable performances.

The 90-minute set got off to a mild start with Don’t Swallow The Cap, I Should Live In Salt and Demons, all from 2013’s excellent Trouble Will Find Me. As the band charged through each song’s instrumental parts, with Bryan Devendorf’s precise, grinding drumming leading the way, Berninger paced around the stage sipping a glass of white wine. (It’s become his thing.)

But he dove in headfirst for the rest of the evening. Traditionally slower songs like Afraid Of Everyone got a raucous electric upgrade, and Berninger’s baritone vocals were more shouty than melodic.

As the night went on, Berninger became progressively looser. He got on one knee and screamed along with the front-row fanboys, precariously manoeuvred the mic stand and handed off a bottle of wine to an audience member. They finished off with an unplugged version of Vanderlyle Crybaby Geeks (their signature encore), prompting a singalong with the whole band and audience.

Fevers were definitely an electronic band the last time they were in Toronto. But the Ottawa five-piece upped the dance ante at the Horseshoe, triggering an extra dose of club beats and executing their tunes in dramatic, chill-to-fevered fashion. It worked: the audience was up and dancing for much of the set. Too bad that the room had emptied considerably by the time they went on.

Most people had come out for previous act Language Arts, including singer/composer/guitarist Kristen Cudmore’s parents, all the way from Nova Scotia. For the four-piece Toronto band’s record release show, they added a trumpet player and backup vocalist, fleshing out tunes from Wonderkind. Songs began in a mellow way – sometimes too mellow – but eventually swelled to satisfying levels. (Drummer Neil MacIntosh deserves a lot of credit for the momentum swings.)

Highlights were opener Oh Tangible World (we got a glimpse of Cudmore’s versatile vocals), sweet love song 5 Ws and ultra-intense What If It Were To Be Reworked? The latter convinced us that Cudmore should pursue that rap album she’s been pondering.

There’s a mountain of buzz behind young UK vocalist FKA twigs, who had Wrongbar packed to capacity for her Toronto debut. Her dreamy reworkings of R&B and hip-hop motifs have garnered her a lot of media attention, and her songwriting lives up to the hype. However, as she took the stage it quickly became evident that some piece of gear wasn’t connected properly, and she had to abort her first attempt at a grand entrance.

When she returned to the stage, she gave no sign that the tech problems had thrown her off. Her voice was consistently strong, and the skeletal, minimalist grooves translated beautifully live. When gear issues resurfaced, twigs forced the band to stop mid-song. Initially, that seemed unprofessional, but it proved the right call once the groove kicked back in with the missing melodic element. The crowd exploded in approval. The encore-free show felt short, but you could tell most of the audience was already planning to catch her when she returns.