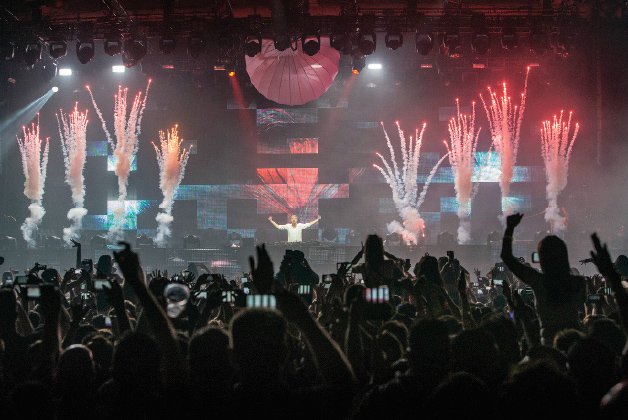 Dutch trance producer Armin van Buuren was all smiles inside his gigantic DJ booth, holding court for five hours. Amid astounding amounts of pyro and ever-changing imagery, he hypnotized the crowd with his uplifting, progressive trance, often busting out live vocalists and musicians. Canadian singer Trevor Guthrie, who emerged for This Is What It Feels Like, was a highlight and provided the best singalong – even if the song drips with schmaltz.

Van Buuren’s earnest and almost too saccharine music isn’t subtle in the least. At one point, he mimed “reeling in” the dance duos on his left and right, pulling them toward the centre where they made a formation that resembled an 80s workout video. Super-cheesy, right? But then the bass kicked in and his admirers went nuts. Obviously, he knows his audience.

If you’re a big-room dance fan, the spectacle was impressive. In addition to the musicians, singers, dancers and Cirque du Soleil-style trampoline artists, the extremely well-run event had efficient security and food and drink lines, ample bathrooms and good accessibility to TTC and cabs. The Convention Centre’s industrial look even worked to its advantage, especially when van Buuren brought out a scary-looking drummer for a brief few minutes of edgy, Prodigy-like aggression.

“We weren’t actually too sure if anyone was going to come tonight,” said Shapeshifter frontman P Digsss, early in the drum ‘n’ bass band’s fevered set.

To be honest, neither was I. Shapeshifter are enormous in Australasia and parts of Europe, but how many Torontonians would turn up for a New Zealand d ‘n’ b group?

As it turns out, a lot. By the time Digsss & co. emerged at around 11:15 for their Canadian debut, the Garrison was full. And when they launched into their massive 2009 hit, Dutchies, the room started dancing and didn’t let up.

Devin Abrams, Sam Trevethick and Nick Robinson were working up a sweat, too, passionately hunched over their synths and samplers when they weren’t playing keys, guitar and bass respectively. It’s too bad a synth set-up was blocking our view of the furiously drumming Darren Mathiassen.

Digsss’s deep, velvety vocals lend the band heaps of soul, but dub, reggae and jazz also bubbled to the surface. In fact, most of the guys studied jazz in university, which Abrams flaunted in the second half of the set with a couple of excellent sax solos.

Partway through Ghost’s show at the Phoenix, while singer Papa Emeritus was addressing the crowd between songs, a loud static crunch came from the guitar of one of the unnamed ghouls. In his face paint and pope hat, Papa turned to look, and then joked about how it sounded like one of his old records.

The moment stood out because there isn’t a lot of spontaneity at a Ghost show. Songs sound exactly like they do on record: soaring vocals replete with choirs despite the absence of backup singers crisp and epic guitar riffs and body-rattling bass despite the absence of amps. There is little banter, just standard “How are you doing, Toronto?” queries in Papa’s comical accent, which is more Transylvanian than Swedish. Still, mixed with visuals that evoke an evil midnight mass, it’s all hugely satisfying.

The satanic Swedish six-piece got the best tunes from their excellent 2010 debut, Opus Eponymous, out early, as young fans tried desperately to mosh to not-very-mosh-friendly Ritual, Prime Mover and Elizabeth. Material from 2013’s Infestissumam made up the show’s latter half, many hitting harder live than on record, including Year Zero and Ghuleh/Zombie Queen. That cover of Here Comes The Sun needs to go, though.

As S. Carey, Bon Iver percussionist Sean Carey channels the rhythms and shapes of the natural landscapes he loves into an amalgam of Americana, pop and jazz. It’s very much a produced sound, and the Wisconsin-based musician’s newly released second album, Range Of Light, is full of delicate details and textures that give the music life.

Perhaps aware that the sound of babbling brooks doesn’t translate well on small club stages, Carey and his four-piece band used projections to allude to the music’s nature inspiration. Arrangements flirted heavily with Sigur Rós’s brand of glacial post-rock and gave the bandleader a few opportunities to wild out on drums.

Carey is a dusky, heartfelt, ultimately limited singer who works with what he’s got, but his melodies weren’t strong enough to give the expansive sound a grounded centre, and attempts to recreate the Brian Wilsonesque harmonies fell flat.

They had more to work with during a cover of Björk’s Unravel but overrode the ballad’s precise phrasing with a showy vocal interpretation by opener Casey Dienel (aka White Hinterland). An unfocused, unnecessary bass-and-vocals rendition of the jazz standard I Fall In Love Too Easily followed in the encore.