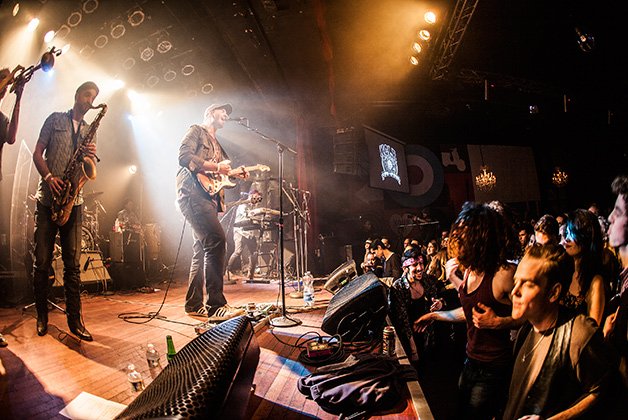 KC Roberts & the Live Revolution’s record release show Friday night was a marathon. Joined throughout the night by a rotating cast of backup singers, musicians and rappers, the seven-piece kept on rocking until 2:15 am.

Dancers at the front of the full room boogied for the whole four-hour, two-set fete to tunes from KCLR’s double album, Parkdale Funk 2: Sides. The first set contained a few too many slow songs, but the band made up for the lack of BPM with musicianship: Roberts worked his electric guitar magic on Humanity, which also included a crowd-silencing trombone solo by Christian Overton.

Later, a three-piece string section added symphonic flair, but music from the club downstairs throbbed during what should have been some of the most poignant moments.

The second set was more upbeat. Toronto rap duo Airplane Boys worked the crowd to their most hyped during Get Back To The Middle, and KCLR’s electro-dance-inspired Daisy D also translated well. I counted 21 people onstage for the triumphant closing number – an indulgent end to a celebratory night.

Last Wednesday, Smith made his Canadian debut promoting his upcoming In The Lonely Hour LP. From the moment he stepped onstage, the packed crowd giddily sang along, shrieked and revelled in his feel-good success story.

There’s no denying Smith’s vocal talent, but as a performer he sometimes seemed guarded and stiff. He’s never been in a relationship, he explained, so his songs are primarily about unrequited love and longing.

For example, I’ve Told You Now is about getting drunk and telling your partner too much too soon, and he sang it with warmth and humility.

Smith’s affinity for gospel and quavering R&B runs recalls Mary J. Blige and George Michael, but unlike them, he rarely seemed to lose himself in the material. That changed toward the set’s end, however, with captivating renditions of torchy singles Lay Me Down and Stay With Me.

Eighties pop icon Boy George has weathered high-profile scandals that eclipsed his status as one of pop’s singular voices.

He’s released his first album of original material in 18 years, so the focus is back on the music. And judging from the excited crowd that greeted him and his eight-piece band on Thursday, his fans couldn’t be happier.

Nice And Slow, off the new album, summed up the vibe of the 90-minute set’s first hour – a mix of his dub and reggae new material and equally laid-back covers of George Harrison, Yoko Ono and Lou Reed.

George’s husky voice has retained its depth and poignancy, and has taken on a weary gravitas with age. He sounded good, but was frequently thrown by technical issues onstage.

The band provided tight, unhurried support, yet as the mellow rhythms and unnecessary guitar solos kept coming, the show felt like a snooze. Fans awaiting danceable catharsis were rewarded at the 60-minute mark when the band launched into Culture Club’s Church Of The Poison Mind.

Finally, lively singalongs bolstered the energy level during encore performances of Do You Really Want To Hurt Me?, Everything I Own, Karma Chameleon, T-Rex’s Get It On (Bang A Gong) and Bow Down Mister.

On last year’s Shaking The Habitual, Swedish duo the Knife endeavoured to make music that mirrored the leftist, feminist and queer theory ideas that inform their lyrics. They were no longer pop infiltrators the album was resolutely anti-commercial.

They expanded this idea in concert by casting themselves as part of a sparkly-suited dance troupe – essentially removing themselves as the focal point – in a show that used acid techno rhythms, eerie lighting design, arresting tableaux, agitprop poetry and free-wheeling choreography to foster a spirit of crowd collectivism.

It was refreshing to see a pop group espouse progressive politics in front of a mixed crowd without irony. It’s rare to see dance, movement and music come together to further unabashedly political ideas in such fun and galvanizing ways in any medium – let alone a pop concert.