ANGEL HAZE at the Hoxton, Thursday,. 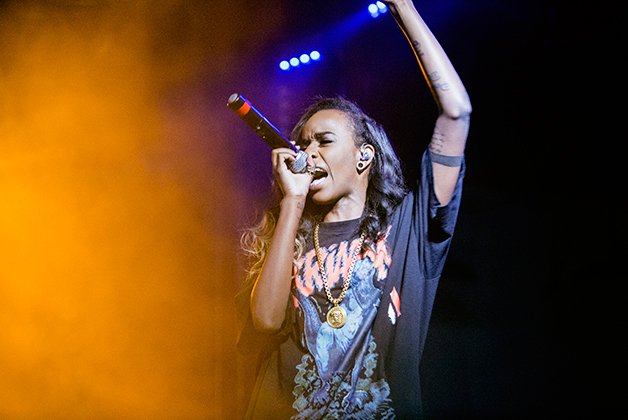 ANGEL HAZE at the Hoxton, Thursday, May 1. Rating: NNNN

Having previously toured with a full band, Angel Haze told us she was a little nervous at first about performing with just her DJ. But on Thursday night, the NYC-via-Detroit emcee could have been rapping a cappella for all clubgoers at the Hoxton cared.

The venue couldn’t have been any louder. Her first song, Echelon (It’s My Way), the standout track from her latest album, conveniently name-drops our city: “On my way out to Cabo / Riding beside a baddie that’s never once left Toronto.” Cue loud squeals that never really stopped.

Haze’s delivery is confident and robust, and she’s careful with each verse. If you were hearing her for the first time, you’d know exactly what she was talking about: whether it was making money on Werkin’ Girls, or depression, solitude and suicide on Angels & Airwaves – which, at Haze’s request, turned into a massive singalong.

She’s not at all precious: she gamely climbed over the stage rails to rap on the elevated areas on either side of it, pulled up four girls from the audience during her performance of Planes Fly and, later, descended fully onto the floor mid-song to weave through the crowd.

JERRY LEGER with ALANNA GURR AND THE GREATEST STATE and THE PINECONES at the Horseshoe, Thursday, May 1. Rating: NNN

Jerry Leger’s launch for his latest album, Early Riser, had a great lineup: he enlisted Guelph’s Alanna Gurr and the Greatest State – fresh off the release of their new album, Late At Night – and Toronto power pop trio the Pinecones to open.

But despite its strong components, the night failed to coalesce until mid-way through Leger’s country rock set, when fans got up close, sang along and cut a rug near the stage.

It was tanning-salon hot at the ‘Shoe, and the sound was too loud for the Pinecones (who played a formidably good set to a disappointingly small crowd) and kinda wonky for Gurr, whose introspective vocals got a little lost in the mix.

The room worked better for the headliner. His robust voice was blanketed by big, bassy, colourful sound care of his band, the Situation, which includes Aaron Comeau on keys and James McKie on electric guitar and fiddle.

Leger and co. have upped their swagger in recent years. But they interspersed the rockers with acoustic ballads, lending a sympathetic warmth to songs about the screwed-up side of love.

On Saturday night, British rapper M.I.A. – who was originally scheduled to play Yonge-Dundas Square as one of Canadian Music Week’s headliners – ended up playing a CMW kickoff party at a tiny Queen West club instead, three days before the actual festival began.

We thought it was going to be packed to discomfort, but the powers that be did a good job of letting in only a civilized number of fans. In the end, the crowd was a little tame, but M.I.A. rose to the occasion, bringing more of a stage show to Tattoo than the club’s seen in a long time: three normcore-clad backup dancers – two girls and a guy – as well as a set-up of twinkly lights that made a backdrop resembling a lit-up nighttime festival.

In heart-shaped sunglasses, a patterned jumpsuit and a bucket hat, she played songs from her entire discography, including Hussel from Kala, and Double Bubble Trouble from her latest, Matangi.

Though she chided her sound woman for problems throughout the evening, the audience was mostly unaware of them. Eventually, the emcee wove through the crowd and climbed atop the bar to perform Paper Planes. Moving over to stand on the sound booth, she attempted Bad Girls. When sound issues persisted, she sang the song a cappella, providing the best moment of the night.

BUN B at the Hoxton, Sunday, May 4. Rating: NNN

It was an open secret that Raptors ambassador Drake would be in attendance at Bun B’s tour stop Sunday, despite the team’s loss earlier in the day. (B was sitting courtside with the Toronto emcee.)

The headliner took the stage shortly after 11:30 pm with guns blazing, running through Draped Up and UGK classic Diamonds And Wood.

On One Day, UGK’s seminal record about untimely deaths, B rapped his verses while squinting, looking like he could burst into tears at any moment.

After his encore culminated with the 2007 instant classic Int’l Players Anthem, Drake bounded out in a Sidney Crosby Team Canada jersey (reminding himself of happier times in Canadian sport), sending camera phones aflutter. “Y’all got to make some motherfucking noise for Bun B,” he said. Blame the sombre feelings of losing game seven at home in the final seconds, but the response had less gusto than you’d expect for a Drake cameo.