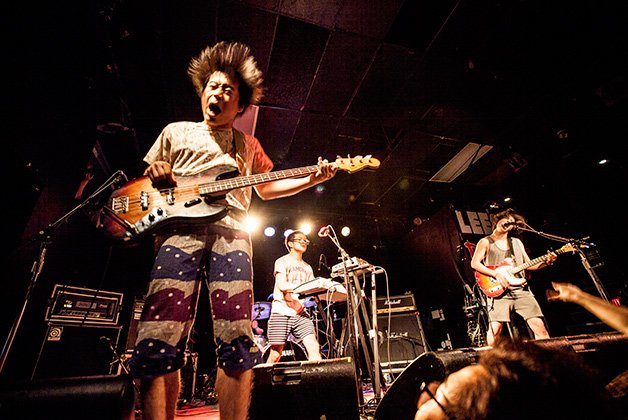 NAYUTA, KINOKO TEIKOKU, HAPPY!MARI, JIZUE and UCHU CONBINI as part of NEXT MUSIC FROM TOKYO at Lee’s Palace, Saturday, May 17. Rating: NNN

Toronto anaesthesiologist Steven Tanaka outdoes himself year after year with his Next Music From Tokyo series, flying underground Japanese bands to Canada at great personal expense. The five adventurous young acts on this year’s tour sold out the second Toronto show at Lee’s Palace (and the previous night at the Rivoli) and drew exuberant cheers all night long.

All of the bands had energy in spades. Happy!Mari, on third, exemplified this best, their winning performance style – stage-diving and mad tambourine-shaking – making up for the grating, sometimes emo-like vocals and frenetic sound. Kinoko Teikoku were slightly more dour (this is all relative), but their tight execution of distorted shoegaze and emotive balladry hit harder than any other band.

And while Uchu Conbini’s math-pop opening set and Nayuta’s fascinating approach to vocal harmonies in their closing set were also notable, instrumentalists Jizue stole the show. The four-piece play a kind of highly progressive, dynamic mix of jazz, Latin and post-rock, each member an absolute virtuoso. Too bad they went on second nothing that came after was quite as head-spinning.

Turning the Sony Centre into a sea of floral dresses and flower headbands, fans of American pop singer Lana Del Rey screeched their way through her 70-minute set.

I really like Del Rey’s songs individually, but strung all together without any charisma, banter or warmth, the result is an incredible sameness. Waltzing onstage with a cool hair flip and a stiff pageant wave, Del Rey saved her breath for her songs, barely speaking and failing to even introduce her four-piece band.

The Coconut Grove-evoking staging was impressive. Too bad she didn’t make use of any of it, sticking within three paces of the mic for most of the show. All her hits were there: Summertime Sadness, Video Games, Young And Beautiful, Born To Die, and a new one, West Coast, from her forthcoming album, Ultraviolence. She sang them mostly well, except when it seemed that even she couldn’t hear her band over the crowd’s screaming, or when she messed around with Video Games, making it hard to sing along.

She redeemed herself with a straightforward rendition of National Anthem, but she should’ve done that as an encore. (There wasn’t one.)

Two years after Haim parlayed buzz-band status into a major-label deal, the California trio made their long overdue Toronto debut with an expertly choreographed rock show that could not have made a better first impression.

The set also included two covers that nodded to disparate influences: a thundering rendition of Fleetwood Mac’s bluesy instrumental Oh Well and a straightforward take on XO, the Coldplayest song in Beyoncé’s catalogue.

Haim have an effortlessly affable presence that makes them seem more like co-conspirators than rock stars – an image they played up with funny and digressive Valley girl banter. But it was their digressions into shredding like every song was their last that set them apart.

HOZIER at the Rivoli, Saturday, May 17. Rating: NNNNN

There are many celebrated Irish singer/songwriters. And while Andrew Hozier-Byrne (aka Hozier) absolutely nails the storytelling lyricism we’ve come to expect from his countrymen and women, his sonic influences come from Chicago and the Mississippi Delta. The dynamic is irresistible: his words are irreverent and sometimes blasphemous, but the music itself would sound at home in church.

On Saturday, he played four separate guitars and employed a four-person backing band to achieve his blues/soul/folk sound. The sold-out crowd hollered in approval of songs off both his EPs, but stood in rapture for anything new as well.

But those songs where he flaunted his gospel and choral chops with the full band were the most impressive. For example, Work Song sounded almost like a spiritual with its low, wounded harmonies – difficult territory to navigate for a white solo artist. But with his two female backing singers (including Alana Henderson, a successful Irish artist in her own right), additional harmonizing by the male band members and dramatic handclaps all around, it was spectacular.