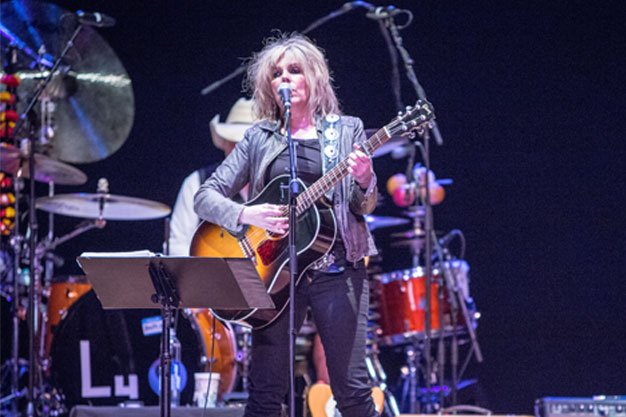 Lucinda Williams has travelled a long way since the launch of her jangly eponymous 1988 LP and her breakout album a decade later, Car Wheels On A Gravel Road. This year she’s released Down Where The Spirit Meets The Bone, a double album of country soul.

The Americana songwriting queen admitted that it felt kinda weird to play some of those “earlier songs,” but we’re glad she dusted at least a few off for Massey Hall. She totally owned bluesy Randy Weeks cover Can’t Let Go, and her powerful delivery on songs like I Just Wanted To See You So Bad nearly brought this reviewer to tears.

Williams’s great band grooved on new songs West Memphis and Something Wicked This Way Comes, the latter a kind of swampy gospel exorcism, with Williams guitar-free and able to move her arms about.

Meanwhile, her solo turn on When I Look At The World was evidence that she’s still penning great songs.

During a slightly chaotic encore of the lights-up, coats-on, band-comes-back-out-a-couple-of-times variety, Williams dug into Fats Domino, the Allman Brothers and Neil Young, closing with a surprisingly convincing, fist-pumping cover of Rockin’ In The Free World, with compliments to Canada.

Irish singer/songwriter Damien Rice hit the Danforth Music Hall after an eight-year absence, playing alone with just his acoustic guitar, a little smoke and a couple of spotlights behind him. Occasionally, there were swells of thundering feedback, but that was it in terms of effects.

The minimal set-up worked well for the musician, who handily carried the two-hour show, except for a couple of minor glitches when he couldn’t quite reach the high notes. (He admitted that his throat was very dry.)

But no matter how hard he strummed that guitar, it couldn’t make up for the orchestration on his albums. It’d be satisfying to see Rice’s tunes performed with a fleshed-out band and female vocalists during the duets. He wisely focused on back-catalogue hits – 9 Crimes, Delicate, The Blower’s Daughter – and finally gave some time to his new album, My Favourite Faded Fantasy, 45 minutes into the show.

The best part? Just before the encore, Rice split the audience into thirds, leading us through a three-part singalong of O favourite Volcano, mimicking the recorded version. We sounded pretty great.

OPERATORS, TEI SHI, JACK NAME and many others as part of M FOR MONTREAL at various Montreal venues, Wednesday to Saturday, November 19-23. Rating: NNNN

M For Montreal represents all the things we Torontonians love about Quebec’s cultural capital: it nurtures its own artists, it’s hip without seeming to try, it’s really inexpensive.

The not-for-profit festival feels indie and intimate. Its point isn’t to sell as many wristbands as possible or fill up large venues, but to launch the careers of Canadian artists (mostly from Quebec, though Toronto had a strong contingent) outside the country, which is why the fest reels in media from as far away as Berlin and Paris.

Highlights from the four days? Electro-pop-R&B singer Tei Shi hypnotizing us with her breathy, effects-enhanced vocals, both with her own material and a cover of Beyoncé’s No Angel. Synth-pop outfit Operators‘ totally compelling frontpeople Dan Boeckner and Devojka, who initiated M’s biggest dance party. Weaves singer Jasmyn Burke making the most of Café Cléopâtre‘s strip-club-cum-performance space. And Jack Name puzzling us with their psychedelic, droney, noisy repertoire, which managed to sound country and western one song and 90s pop the next.

Dan Snaith‘s most recent albums as Caribou have been increasingly inspired by electronic music. Wisely, he still takes a live band approach for his performances, though, which makes his shows far more engaging than those of most artists navigating similar terrain. While some elements were still sequenced to help maintain that robotic quality, Snaith and his three-member band allowed for enough variations and real-time interplay to ensure there was never any question about how “live” the show actually was. They also proved that you can still put on a great synchronized light show without sacrificing spontaneity.

Snaith focused mostly on material from this year’s Our Love and 2010’s Swim, balancing the uptempo house-influenced tracks with slower ambient soul numbers. Both sonic extremes got strong reactions from the crowd, with some of the biggest applause of the night going to opening act Jessy Lanza‘s guest appearance on Second Chance, which proved that her soaring vocals don’t need the safety net of the studio to impress. It’s been a long time since Snaith lived in Toronto, but this final tour stop was definitely a triumphant homecoming.