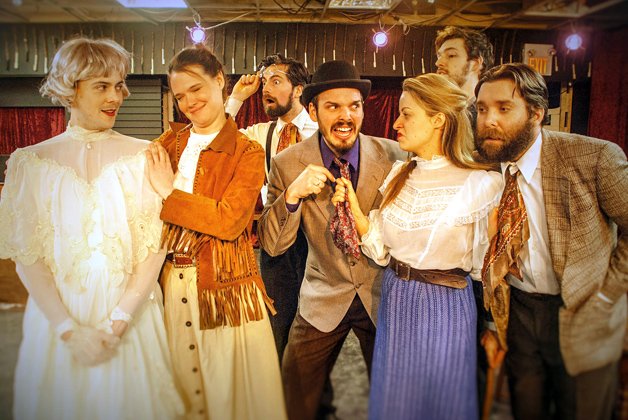 Take Shakespeare’s The Taming Of The Shrew, edit it a bit, add some commedia dell’arte improv, mix in a good dose of the Marx Brothers, and you have Red One’s take on the comedy, here called Shrew.

Much of it works under Tyrone Savage’s direction, and some of it doesn’t.

Set in a Klondike bar complete with honky-tonk piano, the show has lots of energy and a group of actors who play really well together. Savage keeps the Induction scene – in which the drunken Christopher Sly, for whom the Shrew tale is played, is tricked into thinking he’s a lord – and gives it an unusual spin. That introduction allows for some cross-dressing, notably the turning of Kate’s sister, Bianca (Kelly Penner), into a drag role and the sisters’ father, Baptista, into their mother (Claire Burns).

Benjamin Blais’s take on Petruchio has a madcap quality that works well throughout, notably in his first scene/fight with Kate (Karen Knox), which begins with brawling and ends with banter. Bianca’s three suitors are also strong: Andy Perun (also the bar’s piano player) as the competitive Hortensio, Brenhan Mckibben as the older Gremio and Daniel Briere as the exuberant, lovestruck Lucentio. Lucentio’s pursuit of the flighty but coquettish Bianca around the theatre is an entertaining insert in the second act.

Kate is the play’s most difficult character, not just in the famous last speech but also in her development. Knox and director Savage don’t offer any reason for her behaviour, though this Kate is taken with Petruchio from first sight, as he is with her. Over the course of her “instruction” by Petruchio, there’s a sense that she’s playing along with his shams. By the last act, she’s warmed up and become part of this world rather than an outsider. Her final lines are delivered partly as a joke, partly with affection for Petruchio.

But if you’re going to adapt the script and set it in a northern Canadian community around 1900, make more consistent use of the concept.