You might think Sri Lankan mob violence is a tough literary subject, but according to the author of the beautiful, Buddhist-tinged The Hungry Ghosts, portraying immigrant life in Canada is much harder. 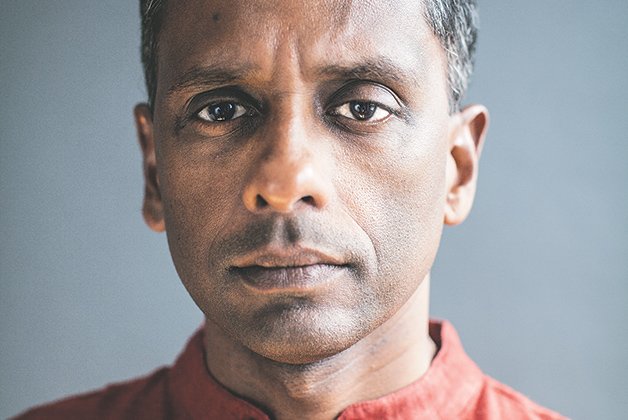 Shyam Selvadurai’s home is a wreck. The kitchen’s been gutted, the dining room is piled high with cartons, and the only common space that’s not floor-to-ceiling clutter is a tiny section near the front windows.

The heritage low-rise and its adjoining twin stand alone among the high-rise apartments and condos piercing the sky at Spadina and St. Clair.

“Great building,” I say as he shows me the new floor in the kitchen.

“Yes, it is,” says the Sri Lankan-Canadian author with a grin. Pointing to the dining room, he adds, “John Irving used to live on the other side of that wall. They tell potential tenants about all the famous authors who have been living in the buildings as part of the sales pitch.”

Selvadurai, whose first novel, Funny Boy, was shortlisted for the Giller Prize and won the Books in Canada First Novel Award, is also one of those famous scribes. But he’s no literary diva. Clad casually in flip-flops and socks and a South-Asian-style shirt, he’s calm amidst the chaos and generous with his time and ideas.

With 1994’s Funny Boy – which landed him on NOW’s cover – and Cinnamon Gardens four years later, Selvadurai transformed CanLit, proving that great works can become part of our national canon without being set among our lakes and mountains, or even in our burgeoning cities. Told in vibrant prose and with intense immediacy, Selvadurai’s stories brought Sri Lanka’s civil strife home.

Ten years in the making, his new book, The Hungry Ghosts, pursues many of the themes of those works: political tension in his home country and the anxieties attached to coming out in South Asia.

But this time, he’s set nearly half the story in Canada. And it wasn’t easy.

“I hadn’t written about Canada before,” he says, with his gentle lilt. “I always think of a literary voice as a singing voice – that I’m a mezzo-soprano and the material is operatic. My voice and the Sri Lankan material match up.

“It was hard to find the language to render Canada. It kept sounding too cutesy, too catering, too much like the kind of immigrant life that people are used to reading about.”

And that’s not what he was after. He wanted to reflect the experience of his family and friends in Canada, not that of newcomers struggling with language or isolating themselves in small, like-minded enclaves – the hurdles described in works by Amy Tan or Jhumpa Lahiri, for example.

“My mother is not a sheltered woman who wants to stay at home, wear her sari, go out to the Bridlewood Mall and not speak English and not have an analysis of the situation. She’s like the character in the book who says, ‘My supervisor can’t spell, and her grammar is worse than mine.'”

His protagonist, Shivan, brought up in relative privilege in his grandmother’s house in Sri Lanka, moves to Toronto, originally to escape the Sinhalese-Tamil riots, but returns to his home country until a personal trauma drives him away, possibly for good, to Vancouver.

His most conflicted relationship is with his grandmother, a canny businesswoman who rejects her own daughter but takes Shivan under her wing. She’s the character you love to hate – powerful, ruthless even, yet somehow winning the reader’s sympathy by doing everything she can to keep her family safe.

“She started off in an earlier novel as a minor backstory character, and then she just strode in and took over,” recalls Selvadurai. “She represents all those grandmothers, women from the rural gentry who came to Colombo [Sri Lanka’s largest city], married into the Colombo families and were not Victorianized. They didn’t have those genteel habits that their more Westernized counterparts had. They were used to running their own businesses, to holding their own. They were almost crude.”

Shivan loves being the favourite until his grandmother betrays him, engendering a fury he can’t shake even when he moves away.

Selvadurai explains that his embrace of Buddhist philosophy during the writing of the book influenced the character and the narrative arc.

“In Buddhism, anger is considered the primary destroyer, but it’s actually fear that’s at the root of all negative feelings. The more angry somebody is, the more frightened they are.” 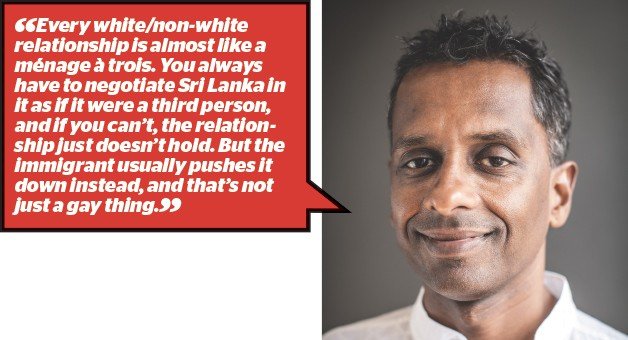 By holding onto his anger, Shivan sabotages his relationship with Michael, a white man who grew up on the West Coast in a loving home with nothing like the turmoil Shivan has gone through in Sri Lanka. Shivan’s terror has led him to refuse to talk about any of it.

“He’s trying for the impossible,” Selvadurai explains. “He wants to construct a life without that baggage. He wants what he’s always wanted, a fresh start, to cut himself from his history, and that’s not feasible.

“It’s a problem that exists at the heart of every white/non-white relationship,” he declares. “It’s almost like a ménage à trois, something I wrote about when I began my relationship with Andrew [his live-in partner, who is white]. You always have to negotiate Sri Lanka in it as if it were a third person, and if you can’t, it just doesn’t hold. The immigrant usually pushes that down for the sake of the relationship. It’s not just a gay thing. I see it in all kinds of relationships.”

Unlike Shivan, Selvadurai has found some peace in what was a deeply conflicted relationship with his home country, though he is distressed about totalitarian rule in the aftermath of the civil war. “It’s like the pus coming to the surface of a wound,” he says.

He heads the Sri Lankan Write To Reconcile project, designed to give voice to young writers to talk about Sri Lanka’s politics in complex ways.

“We’re bringing together creative writing and subjects of reconciliation, war, trauma and memory, not to get closure, which I think isn’t possible, but to try to create space to challenge the single story the government is trying to shove down our throats, that every faction has its single story.”

His current relationship to Sri Lanka:

He spends half his time in Sri Lanka, and finds the shifts easier now.

“I don’t feel torn or dislocated. I come here and slip into being here. Sometimes I long for that dislocation, that feeling of ‘Oh my god, I’m here – when will I go back?’ It was very stimulating creatively.”

But as I sit with Selvadurai in his home, chaotic as it is, it’s obvious that he’s grounded, happy, confident in his gay identity and eager to write about it. Among the most fascinating threads in the book involve Shivan’s attempts to make gay connections when he moves to Toronto in the early 80s. He’s imagined finding freedom in North America, but doesn’t succeed right away.

“It’s a moment in history, historical fiction now. Nowadays, no young immigrant looking for information about the gay community would be wandering around in a lost state until they happen to find a pamphlet in a Queen Street second-hand bookstore. You just type ‘gay Toronto’ into Google and voilà. Or you’re connected before you even come from Sri Lanka.”

He recalls his own experience trying to find a place in what was then a very homogeneous 80s community.

“I wrote that part of the book for my gay contemporaries, about going to Comrades and Chaps, which no longer exist. But I wanted to bring in the issue of race. If you wanted to be gay, you took your place in the white world this was pre-identity-politics. We had no language to articulate our thoughts, what it was like to be at the bottom of the hierarchy. You feel foreign and you can’t speak about your world.

“When the South Asian group Kush appeared in the 90s, I thought, ‘They’re just like me, they think like me, they see the world like me.’ There’s the exuberance in having found each other.

“Those were years when I said I’d never date a white man.”

With exquisite timing, this comes out of his mouth just as Andrew walks into the living room.

Selvadurai lets out a hearty laugh. 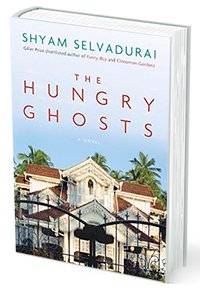 Teen-aged Shivan, half-Tamil, half-Sinhalese and struggling with his gay identity, flees 80s Sri Lanka to Canada to escape the ethnic riots, a homophobic society and his controlling grandmother, but discovers that he can’t let go of his roots and family ties.

Selvadurai deftly navigates his home country’s complex politics and evokes its culture and terrain in ways that dazzle all the senses. And Shivan’s grandmother is a superb character – self-serving yet sympathetic.

This is the first time Selvadurai has set part of a novel in Canada, and he nails it, especially the experience of a young brown man trying to make connections in Toronto’s homogeneous gay community.

It’s taken the Sri Lankan-Canadian author 10 years to deliver this, his third novel. It was definitely worth the wait. $29.95, Doubleday.

Why he still loves to go to Scarborough every week by TTC:

Why Scarborough is the place where he’ll always feel the presence of his family: