Through rain, snow and whatever else the city throws at her, Kneve is in Allan Gardens and on the streets fighting for some of Toronto's most vulnerable 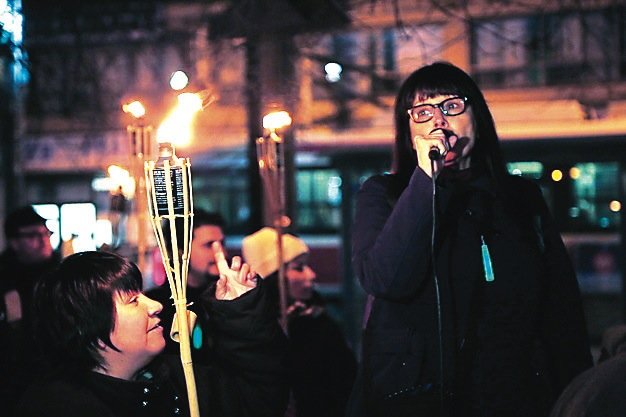 Icy December winds are whipping through Allan Gardens Park at Sherbourne and Gerrard. In front of the conservatory, Sigrid Kneve and a team of volunteers are handing out items from a pile of donated clothes and ladling hot chili into styrofoam bowls for homeless people in the neighbourhood.

“We’re here all winter, every Sunday,” says Kneve. She describes how the grassroots group of six Indigenous women first came together to provide harm-reduction services to street-involved people in one of the most desperate corridors of the city.

“It all started when somebody got sexually assaulted because she couldn’t get a shelter bed,” says Kneve.

In November 2013, a young homeless woman thought she would be safe sleeping in the driveway of Street Health, a community nursing agency at Dundas and Sherbourne, because security cameras were prominently mounted on the side of the building. She was assaulted in two separate pre-dawn attacks.

The idea for a street patrol came out of that.

The women still patrol the area at night to deliver hot drinks, sandwiches, drug kits and clothing to people living on the street. When there’s news about violence or police actions in the neighbourhood, the women get the word out.

Kneve’s activism started long before that. As a single mom, she remembers taking her two children, then two and four, on OCAP campaigns during the Mike Harris era.

“The kids saw all that, and I did have to drag them along when we went into apartment buildings in under-serviced areas to get people to vote.” Her son is an artist now, and her daughter is studying Indigenous governance at Ryerson.

When not patrolling the streets and feeding homeless people in the community, Kneve puts in 20 to 30 hours a week at the Regent Park Community Food Centre at 40 Oak, where she advocates for people living on the margins and helps them navigate the labyrinthine social assistance system.

Although she’s recently pulled back from the night patrols, Kneve continues to be a force on the front lines of the local anti-poverty movement. Ontario Coalition Against Poverty (OCAP) co-founder John Clarke can’t speak highly enough of her contribution.

“The injustices that are all around on the streets of Toronto fill her with pain, yet she challenges these things every day because of her deep concern for others,” says Clarke. “She has experienced poverty. She is a speaker, a community organizer and an inspiration,”

One of Kneve’s own inspirations is Anishinaabe song-keeper Cathy Tsong Deh Kwe, founder of Allan Gardens Food and Clothing Share.

The self-funded group of volunteers in Allan Gardens has grown to 20 from the original six who first started the Sunday lunch program a year ago. A vibe of empathy and non-judgment prevails.