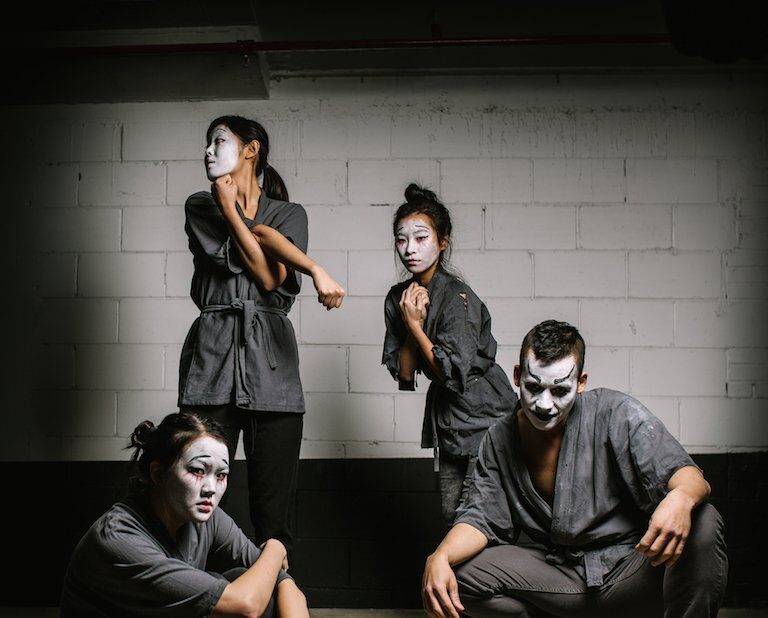 I missed Silk Bath at last year’s Fringe, so I’m glad Next Stage offered another opportunity to see it. Sharply designed and politically charged theatre like this doesn’t come around very often.

Four prison inmates from various Asian backgrounds compete against each other in a Hunger Games-style competition to get into a place called “The Nation.”

I wish playwrights Bessie Cheng (who also plays one of the inmates) and Aaron Jan (who also directs) provided more details about the competition, the Nation itself and the characters.

But the material they’re sending up cliches about exotic backgrounds, bad driving skills and even ping-pong-playing ability is all dead-on and often brutally funny. The four inmates, played by Cheng, Dorcas Chiu, En Lai Mah and Amanda Zhou, their faces hidden by Aram Heydarian‘s white makeup, contort themselves to fit into this world, even if what they’re doing doesn’t represent their true selves.

Performed in English, Cantonese and Mandarin (with English surtitles), the show doesn’t always work, but it’s frank, visually gripping, confident and has a definite point of view.