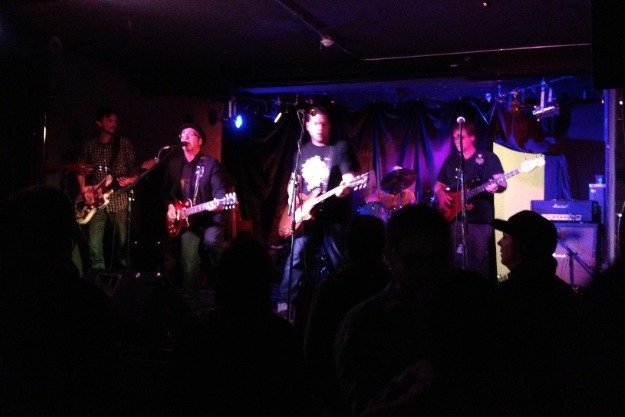 SIMPLY SAUCER with LIDA PIMIENTA, JAY DOUGLAS & THE ALL-STARS and THE HIGHEST ORDER at the Garrison, Friday, February 1. Rating: NNNN

Interest in Canadian indie rock may be at an all-time high, but it’s still not completely represented by big record store chains like HMV or streaming services like Rdio. As a remedy, the National Campus and Community Radio Association and Music Association of Canada have teamed up to create the Ontario Independent Music Archive (OIMA, or oy-ma), an online database that aims to archive new, emerging acts and “historically significant” forebears.

Last night, the service launched with a party that covered that whole range – old and new, popular and esoteric. The show covered four totally distinct genres, with little overlap between the acts’ target audiences. That’s rare for a multi-band show, but the low cover charge (five bucks) and laudable common cause encouraged an eclectic group of fans to catch groups they wouldn’t necessarily take a chance on otherwise.

The night started with a performance from the Highest Order, the new band from One Hundred Dollars’ Simone Schmidt and Paul Mortimer. The quartet, which is set to release a new album this month, takes the former band’s gritty urban country vibe and augments it with psychedelic textures and guitar feedback. It should be interesting to see what they come up with on record.

Jay Douglas took the stage next with his band of “All-Stars.” Douglas originally settled in Canada from Jamaica in the ‘60s and celebrated that heritage with a set that included three Bob Marley covers in a row. Aside from a couple of originals, Douglas mostly stuck to covers, including a set-closing reggae rendition of Leonard Cohen’s Hallelujah, but his charismatic stage presence and energetic dance moves were unmistakably his own.

Lido Pimienta followed with a set of percussive, experimental dream pop. Aside from the fact that she sings in Spanish, the 23-year-old OCAD student (originally from Colombia) fits right into the current crop of Montreal-centred Bjork-influenced weirdos looping ‘90s R&B and pop melodies until they distort, screw and disorient.

A band like Simply Saucer serves to benefit most from a service like OIMA. Underappreciated in their own time but re-evaluated in the last few years, the spacey Hamilton proto-punks have only accumulated mystique. Their night-closing set made a good case for revisiting their old stuff online, their trademark drones now augmented by three guitars and a theramin.