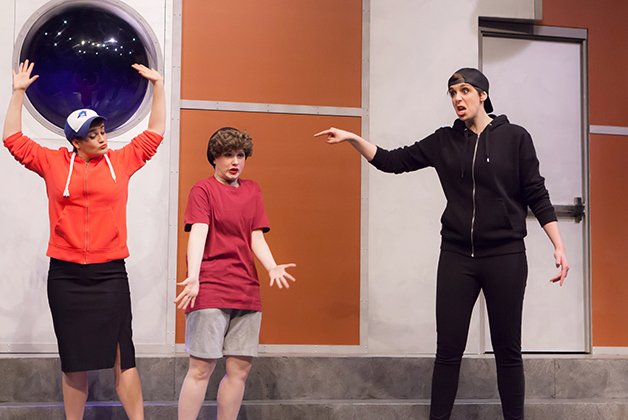 From the schizophrenic weather and our crack-smoking mayor to Justin Bieber on benders… things are pretty crazy right now. All of which gets channelled superbly into Sixteen Scandals, Second City’s funniest revue in ages.

Chalk that up to director Chris Earle, who’s got a great ear and sharp sense of drama and knows how to draw the best work from the six-person cast.

The show, the most consistent revue I’ve seen, opens with two winners. The musical intro is a hysterical (in both senses of the word) greek chorus number about how society’s gone to shit. The second is a brilliant sketch about a downtown Toronto hipster (Craig Brown) whose visit to his suburban pal (Connor Thompson) uncovers a sinister conspiracy about Ford voters. It’s smart and satirical without being one-sided. Incredible.

The uber-talented Thompson, a comic straight guy in the tradition of a Phil Hartman or Dan Aykroyd, gets to shine in two other bits. In one he meets his girlfriend’s (Allison Price) family for the first time, resulting in a cascade of compliments that goes to unexpected places. And then he’s a subway patron at the centre of an annoying but beautifully choreographed flash mob. Or is he?

That’s the great thing about Sixteen Scandals. Even the weaker sketches – an overlong bit about a couple’s black hole of a closet, a Sondheimesque ditty, a sketch about a goblin – are beautifully shaped, well performed and surprising.

What seems like a derivative routine about the way men and women admit to mistakes (featuring Kevin Vidal and fearless newcomer Sarah Hillier) gets a Pop Up Video-influenced rethink.

And a scene about a woman (Ashley Botting, returning to the mainstage after a couple of years) navigating pop-up ads and social media is so cleverly staged it makes all previous cyber sketches seem like the comedy equivalent of dial-up.

Botting also triumphs as a TED Talks lecturer who mines some truths about society’s endless need for self-improvement.

Great physical clown Brown invites comparisons to Chaplin in a sure-to-be-classic sequence about how a drunk guy perceives himself to be and the reality. Amazing that this hasn’t been done before.

And speaking of new stuff, the first act closer literally lays bare our crazy hunger for scandals over substance.

Special mention needs to go to two contrasting sketches. One features a trio of testosterone-charged dudes the other looks at three middle-aged women who are feeling invisible. The kicker is that the first sketch is played by women, the second by men.

Notice how carefully Earle’s directed the actors to add truth and complexity to their creations.

Camellia Koo’s set contains as many surprises as the writing, particularly in the ingenious use of several portal-like windows. And once again, Matthew Reid’s music helps set a tone and mood for each scene.

There’s no improv this time, but when you’ve got a show this solid, you won’t miss it.