Sketchy the clown is running for mayor

No clowning around — it's not an April Fool's joke 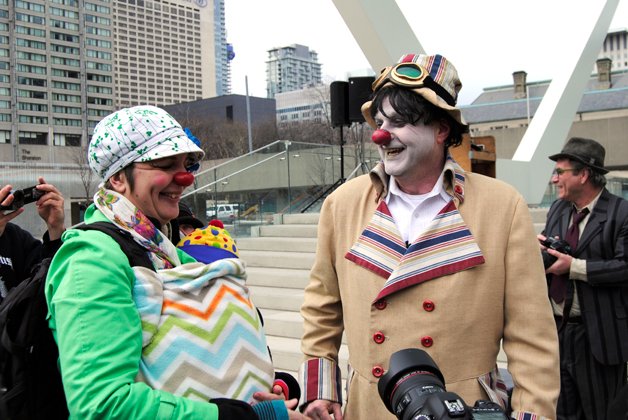 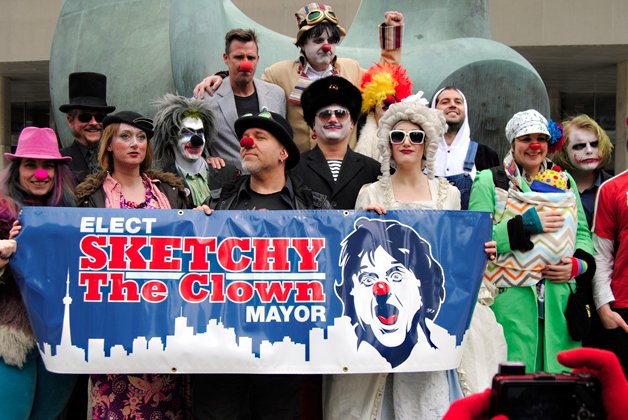 No one in particular said send in the clowns, but if you call them enough times they will come.

Sketchy the Clown led a merry band of red-nosed and costumed folks to City Hall Tuesday, April 1 to officially launch his campaign for mayor and “show people what a clown actually looks like.”

Although it was April Fool’s, Sketchy did in fact register under his given name Dave McKay on March 25 – so no, this is not a joke.

What is comical is that it takes a clown to call out the political farce in this city.

“People have been calling our politicians clowns,” he said at the launch. “They’ve been saying City Hall is a circus.”

To him, that’s an insult.

When a real-life vaudevillian clown takes offence to his profession becoming a derogatory remark against Mayor Rob Ford you know you have a problem.

Sketchy refers to himself as a surly non-conformist who is “no role model for children.”He may even be a cautionary tale for adults, his campaign site says.

Before donning his face-paint, McKay called himself a comedy entertainer and a minor celebrity, in an interview, comparing his work here as a fringe candidate to the Colbert Report and the Daily Show.

He says he wants to use his campaign to educate and civically engage people. “A lot of people get their information about what goes down in the political sphere by watching [these shows] because there’s an entertainment aspect to it.”

What transpired at City Hall Tuesday was not a satirical news report, but a scathing commentary on the state of this city’s politics.

When asked what he’d like people to focus on Sketchy referred to the topic up for vote at City Hall with the island airport expansion plan on the table.

“Stop the gravy plane get rid of the island airport,” he said. “And, expand the nude beach because not everyone can fly in a plane but everyone’s naked under their clothes.”

As a fringe candidate, he said, “I’m not going to be elected mayor,” to a round of boos from the crowd.

Later in an interview, he said, “Don’t vote for me, but if the pollsters call you, say you’re voting for me.”

Kate Mior works as a mime and was dressed as Marie Antoinette.

She said she was supporting Sketchy “because [artists] make Toronto a better place culturally.”

Also present at the launch of the clown’s candidacy was the Joker, known as Chris Burke without his make-up.

“There are enough villains in office, we need some clowns,” he said.

From his perspective, Sketchy’s “circus at City Hall would be better, more entertaining and meaningful because the circus that’s there now is just ignorant.”

Sketchy’s campaign slogan may be a little too accurate, when we have fringe candidates taking up the job of engaging voters maybe “the problem is broken.”