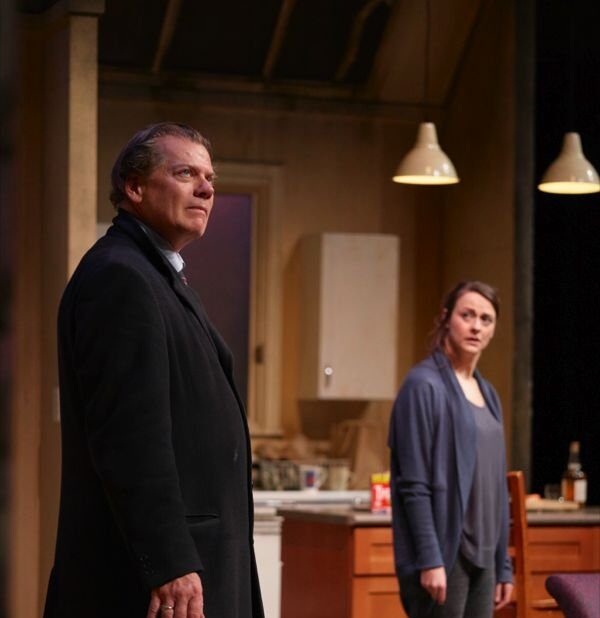 Lindsay G. Merrithew and Sara Topham open up in Skylight.

Lindsay G. Merrithew and Sara Topham open up in Skylight.

David Hare has a flair for complex scripts about troubled lovers. Watching the two main characters in Skylight dissect their affair years after the breakup has enduring dramatic appeal.

When Kyra (Sara Topham) returns to her shabby London flat, she’s startled by the unannounced arrival of 18-year-old Edward (Tim Dowler-Coltman), who requests her help with a family matter. After he leaves, Tom (Lindsay G. Merrithew), Edward’s estranged father and Kyra’s former lover, shows up. The bulk of the two-act play is an intense conversation between Kyra and Tom probing the formation and demise of their illicit May-December romance, which began years earlier when Tom’s wife hired Kyra to help with the family’s burgeoning restaurant empire.

The dramatic tension is set up early when Kyra learns that Tom has been widowed and may want to rekindle their relationship. Topham and Merrithew do an excellent job of building suspense regarding a possible reconciliation while digging deeply into their characters’ emotional states. Topham is particularly formidable as the headstrong Kyra, weary from her teaching job at a rough school but resisting Tom’s desire to put her back in the role of ingenue.

Merrithew’s Tom is a self-important mogul who has little use for life beyond his chauffeured limo and house in Wimbledon. Their ongoing clash of values provides some intriguing social commentary.

Hare uses the characters to scrutinize differing points of view about wealth, class and family dynamics. The play’s strength is its stark examination of marriage and love. The script is sometimes riveting but at other times verbose.

There’s very little action onstage, but director Larry Moss keeps things engrossing. He often physically separates the characters, heightening the spark between them. In one scene, Kyra actually cooks a spaghetti meal while restaurateur Tom tries to control her preparations. Whether you appreciate it as realism or a gimmick, it thickens the air with the scent of fried onions and romantic desperation.