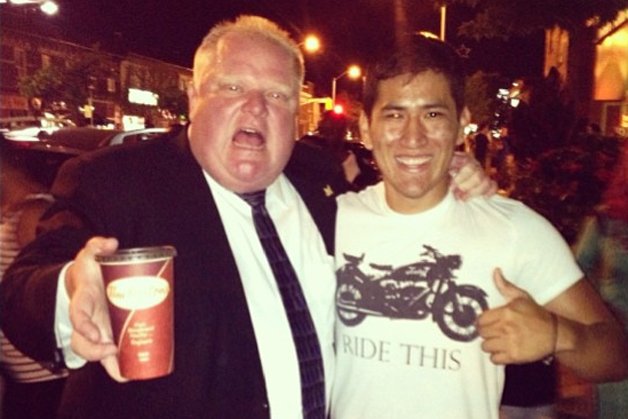 Rob Ford’s appearance at the Taste of the Danforth festival Friday night is raising fresh questions about his activities away from City Hall.

Late in the evening people near the festival began sending out Twitter messages alleging that the mayor appeared to be “drunk,” as he made his way towards the festival.

Videos posted by Twitter user @Advixon show the mayor sounding woozy as he greets people on his way to the event.

In one, he asks groggily “Are we going to go up to the party? Let’s go,” as he’s surrounded by young men who pose for a picture with him.

In an interview with NOW, the Twitter user who posted the video would only give his first name, Mala, and said he was a student at George Brown College. Mala said that around 9:20 pm he saw the mayor and his car parked next to his neighbours’ house near Greenwood and Danforth.

He did not see whether Ford had been driving the vehicle, but he did not appear to have any staffers with him.

Mala then went over to talk to Ford. He said the mayor was swaying from side to side.

“There was a little bit of slurring in his speech,” Mala said.

Mala then followed the mayor as he made his way towards the festival. On his way, the mayor stopped at Tim Hortons for a coffee.

Roughly 20 or 30 minutes after Ford left his vehicle, according to Mala, about four or five of his staffers showed up with “at least” 10 police officers in tow. Mala says the aides appeared worried.

“When they arrived they seemed very concerned,” he said.

“It just looked like they couldn’t’ control him. He wanted to go, so everybody went with him.”

Some staff members whispered in the mayor’s ear but Mala did not hear what they said.

In March, the Toronto Star reported that Mayor Ford was asked to leave a military gala when several guests became worried that he was intoxicated. The paper alleged that Ford’s struggle with alcohol addiction was an “open secret” at City Hall.

Ford denied the story, slamming it as “lies after lies and lies.”

At the time the mayor’s supporters at City Hall came to his defence. Several councillors, including Deputy Mayor Doug Holyday, said they’d never seen him take a drink.

In May, the Star reported to have seen a video of Ford smoking crack cocaine. The ensuing scandal quickly engulfed his administration, but the alleged footage has never been made public, and the mayor denies that he smokes or is addicted to the drug.