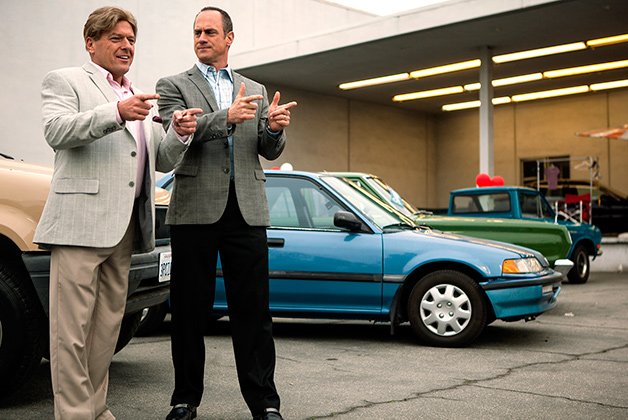 The title, small time, doesn’t just refer to the meagre ambitions of its characters, used car salesmen who peddle beaters in amusing if contrived ways. It also describes the movie itself, an extremely modest, low-budget endeavour that wears its heart on its sleeve and frequently exhibits small, genial charms.

Writer/director Joel Surnow (whom you can thank for the small-screen fireworks of 24) based this personal film on his own father’s life.

Law & Order: SVU’s Christopher Meloni stars as Al, co-owner of a used car lot where, alongside partner Ash (Breaking Bad’s wily Dean Norris), he makes pliable customers offers they should probably refuse but somehow can’t. The film opens with the duo extorting a car thief to make a sale.

Al’s a survivor of a broken marriage. When his 18-year-old son (Toronto native Devon Bostick) decides to skip college and join his dad’s hustle, the film shifts into a father-son bonding tale that isn’t as canned and syrupy as it could have been.

With his personal proximity to the subject, Surnow brings genuine warmth to his often cold-hearted characters. Some of the gags and drama feel artificial, but the movie works because the talented cast sells it so well.