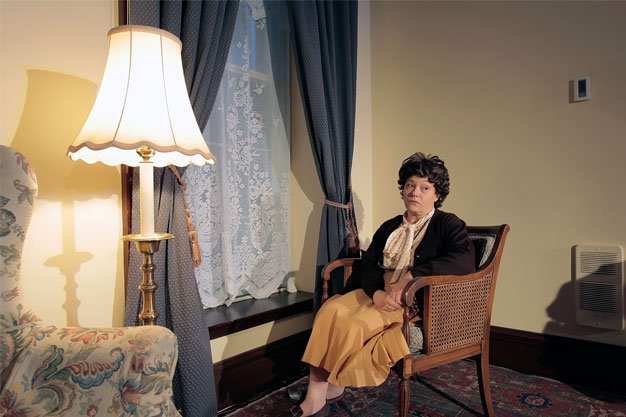 Director John Shooters chosen three of the dozen scenes and gives them a sharp production at Campbell House Museum.

In The Outside Dog, neatness freak Marjory (Naomi Wright) copes with her husbands messy, ever-barking dog and a serial killer whos haunting the neighbourhood. Playing Sandwiches focuses on Wilfred (Jason Gray), a park groundskeeper who cant shake his upsetting past. The funniest of the three, A Lady Of Letters, follows the epistolary career of Irene (Alex Dallas), who seems unable to stop herself from using the post to interfere with the lives of others.

Bennetts wry wit and caustic comments, combined with what his characters notice and describe in the world, tell the audience who they are. They fill their soliloquies with truths they themselves dont always recognize.

Whats special is that he never judges these people.

In control at the start, Wright convinces us that Marjory wants a tidy life as well as a tidy house the tiny observations she makes are mostly comic. As she starts to have doubts about her world, we see cracks in her surface and a nervousness that increases the ostracism she feels from those around her. The scene is a rich emotional journey.

Dallas puts her always fine comic timing to good use in A Lady Of Letters, but she also catches Irenes loneliness and desperation. Irene makes use of her window on the neighbourhood to spy and form judgments, not all of them reliable, and then fire off annoying missives to everyone from the town council to the Queen.

Theres also good writing in the middle monologue, but Gray, who has some fine moments, doesnt go deeply enough into Wilfred, whose positive intentions blend strangely with his personal desires, to no good end. Gray finally captures Wilfreds chilling quality, but some of the early moments could be more gripping.