Requiem for a community arts hub, which housed Clay and Paper Theatre, Maracatu Mar Aberto, Eva's Phoenix and Samba Elégua in one of downtown’s vanishing warehouses 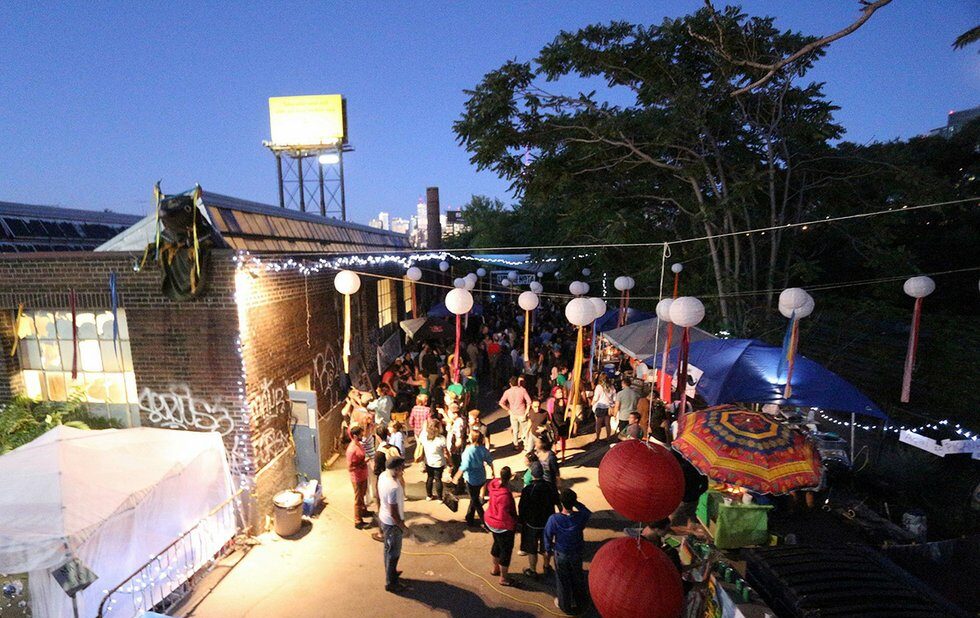 The squat brick warehouse on Strachan south of King W still looks vacant. Well, mostly. With slick but understated black signage, a condo presentation centre on one corner of the building heralds the incoming Garrison Point development. For now, the former Toronto Police garage blends into the industrial landscape.

Train tracks to the south separate the warehouse from a green pitch adjacent to Fort York. In recent years, thunderous drumming sounds attracted pedestrians and cyclists crossing the footbridge between East Liberty Street and the Ex’s Princess Gates. Drawn in by our Brazilian percussion group rehearsals, visitors stepped through the open back door into a world brimming with colour, movement, heavy rhythms and cultural exchanges.

Passers-by could see the giant puppets peeking through the windows, contrasting the condo- and chain store-saturated Liberty Village to the west. Across the street is a fenced-in, giant mound of dirt and another condo that will someday go up on East Liberty.

There’s no music to discover there now. Clay and Paper Theatre, the non-profit community arts company that rented a portion of the warehouse at 35 Strachan, recently lost the space and with it, its access to one of the few remaining Below-Market Rent properties operated by the City. In turn, Clay and Paper housed other carefully selected arts groups, too, including two drumming groups I’m part of, Maracatu Mar Aberto and Samba Elégua.

We all knew closure was coming: the transformation of the building and land is part of Build Toronto’s Ordnance Triangle project, and will make way for the luxurious-looking Garrison Point condos.

This will be a quiet summer for that place, without music, theatre and arts workshops. Gone are our bulky drums and Clay and Paper’s giant puppets, bike trailers, stilts and buckets.

We can’t host our Block Parties there anymore. I’m also a member of the Uma Nota music events collective, and we co-produced get-togethers with Maracatu Mar Aberto. We’d assemble risers behind the building for an outdoor stage and set up food kiosks, a DJ booth, a mini-ping pong table and artist vendor tents for an annual day of fun and music in the sun.

Young families with kids in strollers, joggers taking a break, TFC fans and CNE-goers – everyone would stop, lean up against the footbridge railing and look down on our outdoor summer shindig, taking in a band or the mighty Jamaican-style 15,000 watt sound system, made by Toronto’s Dub Connection crew.

Inside, the original windows, skylights and industrial steel sliding doors remain intact. The sunlight through the tall grid of windows meant we rarely needed lights till after dark. One room still has faint yellow lines painted on the floor, formerly the parking spots of cops’ Harley-Davidson cruisers.

Last fall, Clay and Paper made space for a clothing drive for Syrian refugees, which was so successful that they didn’t have enough room to store all the boxes.

Another non-profit org is losing its homebase, too. The transitional youth shelter Eva’s Phoenix, formerly housed in another corner of the building, agreed to let the city relocate them to Brant after 10-plus years.

The building was a place where a theatre summer student might discover Brazilian maracatu drumming where new friendships were forged over ping-pong, reggae and chef-quality homemade tacos. It was where party organizers Promise created an all-night fun zone, packing in hundreds to dance ‘til the wee hours.

There’s irony to the closure, points out Clay and Paper’s executive director and longtime local community arts worker David Anderson. The space breathed much-needed cultural life into the area and gave community arts groups a home. Meanwhile, Toronto touts its entertainment scene on official City websites like Tourism Toronto and boasts of the “superb attractions, music and events” on the Tourism Sector website.

“The big PR that the arts councils want you to believe are that arts are a great economic generator,” he says. “Well, you might think you would treat the generators with a bit of TLC. People are willing to build structures, big buildings, but at the end of it there’s very little left to pay the artists.”

Anderson’s partner, the company’s artistic producer Tamara Romanchuk, dsecribes the essential stability a home base provides for small and mid-size companies like Clay and Paper.

“It’s given us an opportunity to breathe and focus and work,” says Romanchuk. “ [To] employ artists, which is what we’re supposed to do, to build ideas, to build community, to build shows, to entertain, to stimulate, to ask questions. … People don’t understand how vulnerable a [small to mid-sized] company is. … What’s lost is a place in the heart of the city where independent artists [had] a home, a safe haven.”

In its five or six years as an arts studio, the warehouse hosted productions and rehearsals for Summerworks, the Fringe, Rhubarb, ArtSpin and more.

“How did the City let this property slip through their fingers?” Romanchuk asks. The task force for the project, including Councillor Mike Layton, Sally Hahn of Economic and Cultural Development and Build Toronto, tried to help them find a new space.

“Even the City came up short,” she says, adding that the number of Below Market Rent properties have dwindled drastically.

“There are no more nooks and crannies left for artists and musicians to sneak into anymore at a reasonable [rate],” adds Anderson, who has now relocated the theatre group to the Dupont and Symington area.

Like many of the city’s industrial areas, Liberty Village is full of these stories: artist spaces vanishing struggles between longtime resident artists and new developments. Wonderful old buildings have been demolished or repurposed, like the brick one on Atlantic, formerly the home of Array Music and the experimental sounds and modalities they support. It’s still happening, with artists who inhabit the live/work units at 25 Liberty also losing the space to a new development.

New buildings, like Liberty Market Lofts at 5 Hanna, may include art gallery lobbies. An irony-free press release for that space ends: “You can never have too much art in the world.” But can artists afford the units?

Back on Strachan, I return to the warehouse one day in May, a few weeks after Clay and Paper has left.

From the street, there isn’t much to notice except the sleek Garrison Point presentation centre. In a few years, according to the development plans, the part of the building that housed Clay and Paper’s studio will become a market promenade with a “retail base podium.”

On my bike, I zip around to the back, like always. The door is locked. Amid the trees and shrubs sits junk furniture like an old wooden bar, and other detritus. I peer inside the window grid one last time. Gorgeous rays beam down through the wide skylight. Clay and Paper’s giant yellow papier mache saxophone still leans against the wall in the studio where it’s lived for months.

This was an underground community cultural hub while we had it. Those who knew the space was there could come early and stay late, run lines for a play, practice accordion or drum patterns, or have a meeting as trains whistled past.

We enjoyed its high ceilings and skylights, its raw urban jungle beside the tracks, its weathered brick and worn but sturdy steel confines. Art happened here! There were parties, there was music and theatre and conversation. We had a home for our drums, for giant puppets, for parties and rehearsals for the encounters and collaborations the space enabled. There was a creative community, and the strollers, dog-walkers and aggressive joggers of Liberty Village could see it at their doorstep.

I circle the building along the dirt and gravel pathways, past the city development notices and the adjacent rubble at the end of Ordnance, near the fencing that separates the structures and vacant lots from the train tracks.

So long, Strachan warehouse. We’ll always have the block party.