If the only thing you know about Solange Knowles is the name of her famous older sister, you've got some major catching up to do 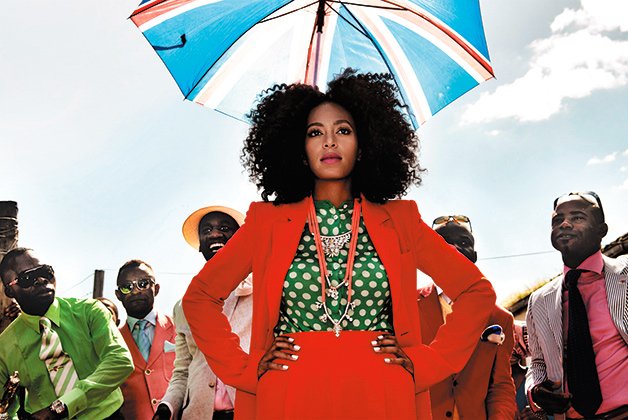 Because I don’t like the thought of your scanning this piece on Solange for the part where we talk about her sister Beyoncé, let’s just get that out of the way:

1. According to Solange, who was backstage that night, Beyoncé did not cause the Super Bowl blackout.

“We had no idea that there even was a blackout. I was still on a high from her and Destiny’s Child’s incredible performance when we came out and found out there was a blackout,” she says.

2. Despite being the mother of an eight-year-old boy, Solange keeps the parenting advice to herself when it comes to her baby niece, Blue Ivy.

“I don’t volunteer advice unless I’m asked,” she says. “Everyone has to find their own rhythm, and my sister has done that extremely organically and has it all in place.”

3. Having Jay-Z as a brother-in-law is amazing.

“We really connect on music and art and exchange a lot about that. I grew up in a house with five women and just my dad, so he is like a brother I never had.”

Solange is saying all this on the phone from a San Francisco hotel a few hours before the first stop on her seven-city 2013 tour. (She lets on that she’ll play two shows at SXSW this year.)

Her relaxed Houston accent and easy laugh don’t jibe with the image of a raging diva seen in headlines about her Twitter account: “Solange Rants Over All The Beyoncé Gossip!” (Perez). “Solange Twitter Rants About Her Natural Hair” (Global Grind). And her latest, “Solange Goes On Twitter Rant, Defends Brandy’s Album Two Eleven” (HuffPo).

In that last one, she called out music blogs (without naming names), insisting that you need to know your Brandy deep cuts before you start handing out ratings to R&B artists. Since musicians rarely engage with critics, and these same blogs spilled megabytes of ink lavishing praise on True, the EP Solange put out in November, that tweet really struck a nerve.

A month later, Solange stands by her words. “Overall there’s just not a lot of diversity when it comes to music journalism, and I would like to see more.

“It wasn’t about Brandy specifically,” she says, “although I do feel like she has made some really strong records. Read the interviews with the Frank Oceans, the Miguels – they all acknowledge that she’s a huge source of inspiration, and yet she’s not being covered.”

The Frank Oceans, the Miguels, the Weeknds – scholars of R&B whose music, while very modern-sounding, is also in dialogue with the genre’s past – all fit right in next to Solange on an iTunes playlist.

Listening to True is a DeLorean ride through the 1980s and early 90s, a work that frames Solange’s pretty vocals in huge hip-hop drum sounds and low-resolution freestyle breaks, analog synths and actual instruments. Her music calls to mind early Janet, Nu Shooz, Toni Braxton, Aaliyah and many others, including Brandy. The sound is very much “on trend,” but in Solange’s hands it comes off like the most natural thing ever.

A few years ago, she made some significant friendships. She got to know Chris Taylor of the band Grizzly Bear, who co-runs Terrible, the record label that released True and will likely put out her upcoming, as-yet-untitled full-length. Reportedly, she’s the one who brought Jay-Z and Beyoncé to Grizzly Bear’s 2009 show on the Williamsburg Waterfront in Brooklyn. (The moment is captured in the YouTube video Jay Z And Beyonce Get Down To Grizzly Bear.)

True marks Solange’s first time on an independent label. Her last album, Sol-Angel And The Hadley St. Dreams, came out in 2008 on Polydor/Universal. Having made her feelings about the music business clear on Fuck The Industry, a song from her I Can’t Get A Clearance mixtape from the same year, Terrible Records became the most stress-free option.

“Now that my son is in school, I’ve been on the fence about releasing records on major labels that tend to dictate your schedule,” she says. “I wanted to be in a situation where I had complete artistic and creative control, and control also of my day-to-day life. Terrible gave me a format to do that.”

Artists on the label include Chairlift, Twin Shadow and another key person Solange befriended some years back, Dev Hynes. Best known for his electronic soul project Blood Orange, the British producer, writer, fashionisto and about 17 other roles, has served as a stylist for Jay-Z’s clothing line, Rocawear and co-wrote Sky Ferreira’s breakthrough single Everything Is Embarrassing, a song that made many critics’ best of 2012 lists.

He also co-wrote and co-produced True, and is working with Solange on her new album.

She spent a year and a half honing her new sound with various collaborators. “I worked with maybe three or four producers before I worked with Dev, and it became apparent to me that we had the best musical chemistry.”

“I’m better able to articulate some things through songwriting. That’s one of those things I’ve always experienced.”

But for the first time in her career, she’s found the style that best suits her sentiments.

Since we’re speaking of style, Solange has to be the most fashionable woman in R&B. I assume you’ve seen the mesmerizingly elegant video for her perfect single, Losing You, filmed in Cape Town, South Africa? (See sidebar.) You haven’t?? Dude! Go watch it now – I’ll be here waiting when you get back.

Making it was a lesson in runway technique.

“During the shoot they were giving me little commands and showing me how to show off my shoes and my posture and how to walk,” she laughs. “And I remember them telling me not to wear more than three colours at a time.”

It’s been three years since Solange released Fuck The Industry as a single. She explains here that music business has actually improved since then.

Her last role as an actor was in 2006, opposite Hayden Panettiere in Bring It On: All or Nothing, the third in the Bring It On series of cheerleading films. But she’s open to acting again.

Solange became acquainted with Lena Dunham after the creator of Girls asked to use her song Losing You in her show. The singer has nothing but respect for Dunham.