NOW MagazineLifeSome plasticizers with those fries?

Some plasticizers with those fries? 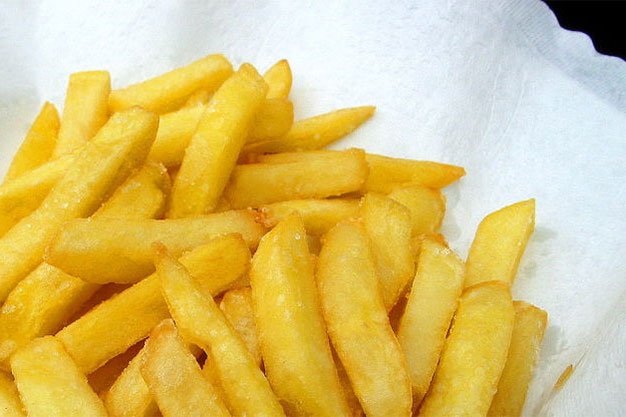 Order a burger or burrito from a fast food counter and you’ve probably made your peace with the fact that you’re ingesting a greasy handful of sodium and fat, but new research suggests those meals on the run are also serving up a sizable helping of industrial plastic softeners.

A recent study published in the journal Environmental Health Perspectives out of George Washington University looked at the diets of nearly 9,000 participants, including kids as young as six, and found that the more fast food they ate, the higher were their levels of phthalates, the chemicals used to make plastics more flexible.

Those who reported eating fast food in the previous 24 hours had significantly higher levels of DEHP and DINP in particular, two hormone-disrupting plastic softeners now restricted from children’s toys in North America because of their potential health risks.

DEPH is officially listed in California as a chemical known to cause reproductive toxicity. Besides fertility issues, it’s also linked to fibroids, endometriosis and diabetes, as well as  lower IQ scores in children exposed in utero. One study published last month suggests a connection between a spike in ADHD and kids’ early exposure in intensive care units to the DEHP used in vinyl medical devices like IV bags and plastic tubing. DINP has been linked to high blood pressure and diabetes.

Both chems were also commonly found in perfumes and nail polish until the industry started phasing them out under public pressure. But they’re still found in industrial food production. The more processed your food, the more likely it’s been exposed at the factory level to plastic gaskets, plastic conveyor belts and PVC tubing (like the kind used in milk processing).

But some of the biggest culprits seem to be PVC food prep gloves and the very packaging we wrap and serve food in. One Italian study found the presence of both phthalates jumped by over 100 per cent in school meals after they were packaged. A ban on PVC gloves in Japan led to a drop in DEHP levels.

High-fat foods like oils, meat and dairy tend to absorb phthalates, but the new study found grain-based foods like bread, cake, pizza, burritos, rice dishes and noodles to be the most contaminated. The researchers pointed out, “Since grain products are found on the exterior of foods such as pizza or burritos, they may be in greater contact with packaging materials.”

The researchers behind this latest study, the largest to date assessing fast food consumption and chemical exposures, believe their findings have “great public health significance” and hope they will help shape government regulations to reduce public exposure to phthalates.

But whether they’re in our food, flooring, perfumes or paints, phthalates aren’t the only chemicals messing with our hormones.

Last month, Danish endocrinologists connected sunscreen chemicals to weakened sperm, and a study published in the Journal of Hazardous Materials suggests that women with elevated levels of triclosan (the chemical used in antibacterial toothpaste, soaps and deodorants) as well as butyl and propyl parabens (used as preservatives in cosmetics) have higher chances of delivering smaller pre-term babies.

It’s just the tip of the iceberg, says the UN, which in a 2013 state of the science report on hormone disruptors such as phthalates noted that only a “small fraction of the hundreds of thousands of synthetic chemicals in existence have been assessed for endocrine-disrupting activity.

“It is critical that we move beyond the piecemeal, one chemical at a time, one disease at a time, one dose approach currently used by scientists,” the UN said, warning that we need to start looking at the effects of a cocktail of chemicals on humans and wildlife. “This is a global threat that needs to be resolved.”

In the meantime, cut back on your visits to fast food joints and stick to minimally processed foods as much as you can.

OTHER SOURCES OF HORMONE-DISRUPTING PHTHALATES

• Electronic wiring (some brands like Apple have phased them out)