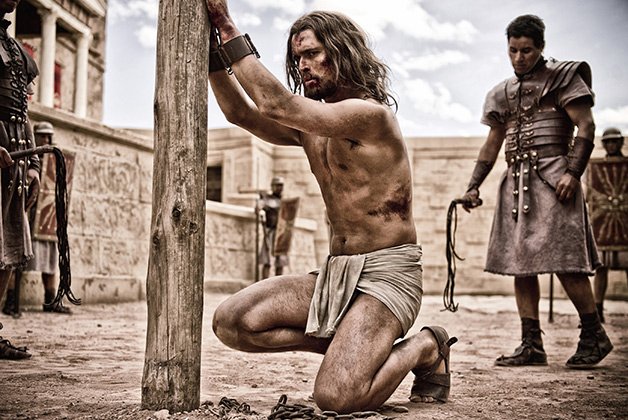 Son Of God is the first of three religious films hitting the big screen this year. (Noah and Exodus follow close behind this retelling of Jesus Christ’s life.) The Gospels have as many movies as Marvel in 2014, so we can only hope for an Avengers-style Biblical alliance next. That kind of camp would be a lot more captivating than this cheap and fawning reiteration of the Western world’s most familiar story.

Portuguese actor Diogo Morgado plays Christ with the aura of a rock star, waving his perfectly conditioned hair and cracking a mischievous smile whenever he ticks off a miracle for the fans, then urging people to believe in him. Considering how unconvincing his Christ is, who can blame those who don’t?

The film shapes Christ’s mission to accumulate followers as a people’s revolution against Roman imperialism and its enablers, the Jewish high priests, whose initial motivations to snuff out the Messiah are depicted as slightly less villainous that usual.

If you somehow don’t already know what happens next, I’m not going to ruin it for you, but suffice to say Son Of God sticks to the scripture, without a single revelatory or insightful idea added to the mix. The target audience won’t mind. If they can stand the repetition of going to mass, they’re already used to this kind of recycling.

Son Of God is actually re-edited from the popular History Channel blockbuster miniseries The Bible, which aired before Easter last year and is now being resurrected in a leaner theatrical form just before Lent. If I say “cash grab,” would that be blasphemy?

At least we could have hoped for some eye-pleasing visuals. The Bible has inspired so much great art over the centuries, but the Holy Spirit clearly couldn’t overcome the meagre budget and lack of talent here.