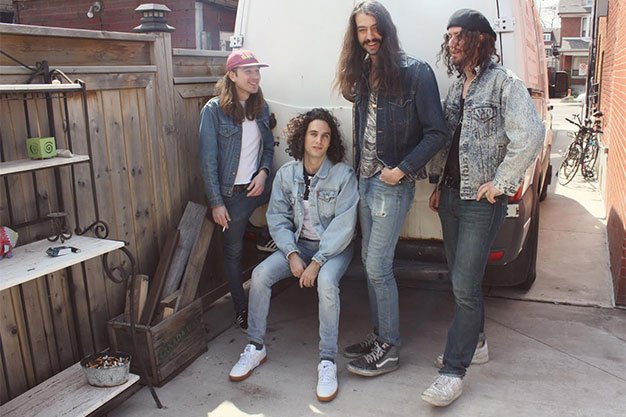 Of the three songs on Cellphone’s about-to-drop demo, Steal Sell boils down their “acid thrash” to its most crucial parts. Bassist/vocalist Mike Wirth Broff’s shrieks complement and feed off the band’s livid charge of riffs, all culminating in one hell of a groovy coda. It’s been fun watching the locals gradually shift from synthy mad scientists to a metal band that escapes easy categorization.

Montreallers Phobocosm are set to perform with locals Paroxsihzem and Drofnosura at Briefcasefest, hands down the best metal festival this city has to offer. They’ll likely play songs from new record Bringer Of Drought, an excellent 35-minute bummer of death metal. The track Ordeal is a chaotic clamour of depressive sounds that starts languidly while blackened guitars and double bass drum roll to a boil beneath the surface.

At Coalition as part of Briefcasefest on Thursday (May 19).

La Luna released second record Always Already at Soybomb earlier this month. On the song House Party, the Calgary transplants start things off with a hooky melody that wouldn’t sound out of place on a White Lung record, only to tear it to shreds moments later courtesy of a fierce call-and-response between vocalist Vanessa Gloux and guitarist Nicolas Field. The song barely breaks the two-minute mark but has crushing impact.

At a time when Toronto’s punk scene is so vital and exciting, it’s frustrating to see it represented in the international press by bands that simply throw around the word “punk” in their press releases. Although Siyahkal are mostly made up of Alberta transplants (former projects include Pavilion, Unfun, Desgraciados and the Chain), they’re one reason Toronto punk is thrilling. Koskesh-e-Khar/Iranian Scream is a raging fury of a song. Cassra’s guttural performance, sung entirely in Farsi, incites the hardcore punk stomp into a full-blown riot. Their tape also comes with this phrase and TOHC seal of approval: “Recorded by Jonah Falco.”

Portland, Oregon’s The Body have cultivated a mercurial reputation in the world of metal for constantly touring and collaborating with new bands. On their own, the two-piece fit comfortably into the confines of doom metal, but each collaboration pushes them further away from any genre parameters. Latest record No One Deserves Happiness ventures into pop music, with an 808 drum machine and guest vocalists tempering the harsh, heavy vibes. Wanderings is beautiful and disgusting, building on frequent collaborator Chrissy Wolpert’s minimal mantra to “go it alone” before enveloping her voice in oppressive sonics and Chip King’s distinctive howl.