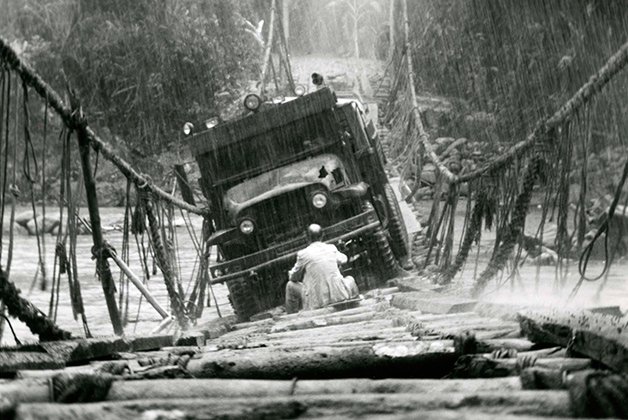 William Friedkin’s Sorcerer was a spectacular box office failure in the summer of 1977. Audiences didn’t want a methodical, intensely focused remake of Henri-Georges Clouzot’s The Wages Of Fear when Star Wars was playing two doors over.

Available only on a crappy full-frame DVD for the last 15 years, Sorcerer roars back from obscurity this month in a new digital restoration that gets three screenings at the Lightbox.

Supervised by Friedkin, the new edition (which also comes out on Blu-ray this month) accurately replicates the grainy, ugly texture of the 35mm prints. It remasters the soundtrack as well as possible: some of the dialogue is a little muddy, but the Tangerine Dream score pulses through the auditorium.

Sorcerer hasn’t aged a day. The story of four men driving two trucks loaded with unstable dynamite 218 miles through the Amazon to cap an oil rig fire is just as immediate and gripping as ever. And Roy Scheider gives a terrific central performance as a New Jersey thug who finds himself leading the suicidal run.

What’s most interesting now is the way the movie seems like a Rosetta stone for the genre cinema of Michael Mann: it’s all brusque process, with men of few words performing a task in hellish tableaux while a propulsive electronic score ratchets up the tension. Mann must have studied Sorcerer frame by frame.