T.O. progressives struggle for focus in the face of a raging civil war 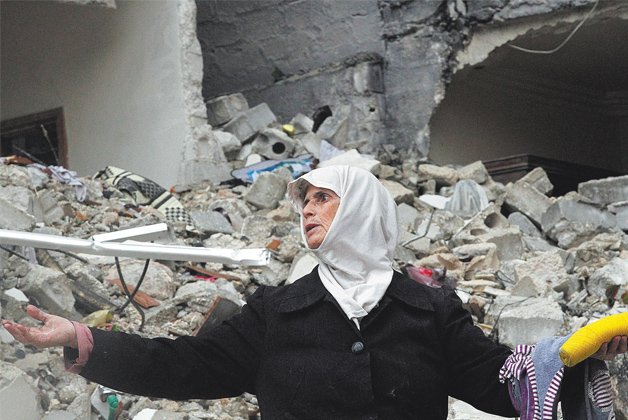 What should we be doing about Syria? Admittedly, it’s a difficult question – so much so that the panelists at last Friday’s (July 12) meeting at Beit Zatoun on Markham are berated by the moderator for failing to offer anything beyond their sharp differences.

One reason for the unfriendly tone is the bizarre defence of Bashar al-Assad by one of the two speakers. It can only be attributed to his membership in the Communist Party, whose positions are in lockstep with Russia’s.

The other participant, Ali Mustafa, a T.O. freelance journalist of mixed Portuguese and Egyptian background and explicitly pro-rebel, albeit with reservations, is less of a propagandist and more informative. He shares observations from a recent trip to the rebel-held city of Aleppo, site of some of the biggest battles in the civil war.

But the most sensitive comments of the evening come from a woman in the audience who asks how she and others can “help relieve the horror. I don’t want to contribute guns, soldiers, weapons of any kind,” she says, adding that she wishes instead “to give money to assist the people who are suffering.”

She’s expressing what many progressives, burned by NATO’s Libya intervention and baffled by the Syrian crisis, are feeling.

Mustafa, for his part, isn’t whitewashing the atrocities happening on all sides of the fight. The only difference, he says, is that the loosely organized Free Syrian Army is split into countless factions and not all can be tarred with the same brush.

He also owns that the critical issue is the misery of those living amidst the chaos and violence. With basic items such as electricity, water, food, sanitation and security increasingly scarce or absent, “people are on the streets selling their goods, going to the market and trying to make a living as best as they can, living maybe on $2 a day. To say there is any kind of functioning economy would be a high exaggeration,” Mustafa says.

Filling the vacuum in some areas, he says, is the most organized and controversial of the rebel groups, the jihadist and al Qaeda-linked Jabhat al-Nusra, which is imposing strict sharia law in rebel-held areas. It has, he says, about 10,000 domestic fighters plus another 7,000 foreign volunteers from Jordan, Egypt, Libya and Iraq.

When Mustafa asked people in Aleppo to explain the popularity of these jihadists, the answer he says he received was that “the Jabhat al-Nusra is not afraid to take on the regime and they are also better equipped. They don’t loot or steal like the [other factions].” Looting is now epidemic, he says.

Internecine battles within the Free Syrian Army are adding to the sense of peril. So what should Torontonians be doing? Post-meeting, I call Hind Kabawat, a Syrian Canadian and a lawyer who bravely transports items like school supplies, winter coats and children’s toys in bulky suitcases across the Turkish border into communities in northern Syria.

Kabawat is clear that Canadians ought not to be sending arms to the rebels. “Humanitarian aid is number one – we want people to survive,” she tells me.

She also senses the reticence of some, including the Canadian government, to offer help to those in the “liberated areas” because they fear the influence of the Islamists.

But she dismisses this concern. “This is the propaganda of the Syrian regime: ‘If you give to the Syrian revolution, it is for al-Qaeda.’ I went [to these areas] several times and I didn’t see anybody treat me differently because I am Christian.”

Obviously, the disaster is now overwhelming. By year end, the United Nations estimates that half the population of Syria will be in need of humanitarian assistance. At the same time, the chaos is inhibiting contributors.

Says Stephen Cornish, executive director at Médecins sans Frontières Canada, “Because of the political and military stalemate and confusion, humanitarian relief is caught up in the paralysis. People are confused as to what they can do, and [Syria] is certainly not receiving the same empathy one would expect given that this is now the largest humanitarian [disaster] in the world.”

Some grassroots aid efforts are scrupulously politically neutral. The Toronto-based Syrian Canadian Foundation for Humanity, for example, raises cash for agencies like MSF but avoids taking sides. Spokesperson Joe Davidson says the priority is to pressure both sides to facilitate the delivery of humanitarian personnel and relief.

The foundation is also keen on changing the conversation so concern over the regime’s alleged use of chemical weapons doesn’t obscure the fact that it’s conventional weapons, used by both sides and purchased externally, that have killed about 100,000 people.

“We feel the focus is in the wrong place [in Ottawa and other western capitals],” he says.

Yves Engler, author of The Ugly Canadian: Stephen Harper’s Foreign Policy, is also concerned about the region’s arms build-up. Canada, he says, is talking a good line about not supporting the rebels because of their extremist Islamic tendencies, but at the same time it’s selling arms to Saudi Arabia and Qatar, the major supporters of the jihadists on the ground in Syria.

In 2012, light armoured vehicles manufactured in Canada and valued at $2.2 billion were delivered to Saudi Arabia according to the Stockholm International Peace Research Institute file on Canada’s arms exports.

“At a minimum, the Canadian government should be calling on everyone – Russia, Saudi Arabia, Qatar, Washington – not to exacerbate the problem by sending in more weapons,” says Engler.