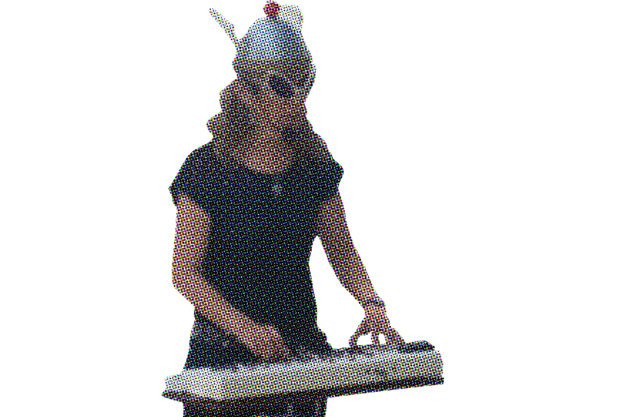 In the five years since it opened, Kensington Market DIY event space Double Double Land has hosted lots of quirky performances, from avant-garde noise rock to trippy cosmic disco. But the headlining artist for the third night of their anniversary celebrations this weekend might be their most delightfully offbeat guest yet.

If you spent much time in San Francisco in the 70s and 80s, you might have stumbled across a street performer known as the Space Lady wearing a winged helmet and playing otherworldly echo-drenched Casio keyboard covers of classic rock songs like Born To Be Wild and The Ballroom Blitz. For about 20 years, Susan Dietrich Schneider supported her three children and husband by busking – staying off the grid to protect her husband, who’d dodged  the Vietnam war.

She’d long since retired from performing when, in 2001, aficionados of outsider music rediscovered some of her wonderfully weird old recordings, leading to an unexpected revival of her Space Lady persona and her first-ever club tour last year.

“I was pretty terrified, but it turned out to be a lot easier than I’d feared,” says Schneider of her first appearances on actual stages. “People were so encouraging and enthusiastic, and I could see that my music means something to them above and beyond anything I ever expected. They went out of their way to make me feel comfortable and appreciated.”

She now enjoys a dedicated cult following, but her busking days were mostly spent in obscurity.

“I rarely drew a crowd. The respect and acknowledgement I’m getting now is so gratifying after all those years of playing to what seemed like deaf ears,” she says.

Even after her reissued recordings started generating fan mail, Schneider felt too shy to return to perform-ing. It wasn’t until her second husband, Eric Schneider, discovered the emails and found out about her secret past that he convinced her to get her old Casio keyboard and effect pedals out of the garage.

“He was astounded. He’d never seen me come to life like that,” she says.

“He made me sit down in front of the computer and write emails to all the fans who’d written, and sent out an announcement that the Space Lady was back.”