As standards shift, selling out gets more difficult to define 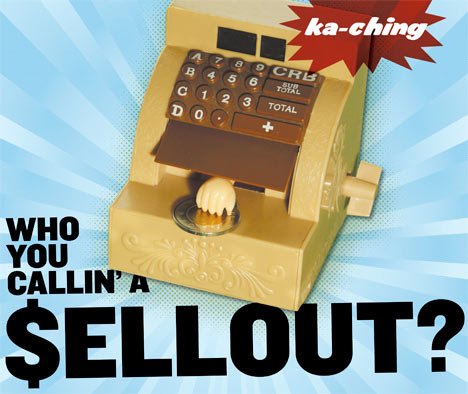 Declaring oneself not a sellout is as credible as announcing that you’re hip. Both pronouncements are best made by others and are meaningless otherwise.

This week’s issue explores the meaning of “sellout” and whether “selling out” is even such a bad thing any more. It’s a conversation perhaps muddiest in music, where an ever-increasing collection of musicians can point to career breakout moments launched by what was once considered an unacceptable move: licensing a song to a movie, TV show or, gulp, commercial.

Do we live in a world of creeping commercialization or one where inventive marketers are finding new ways to get their messages out and money into the system? Once the boards at professional hockey rinks were as pure and white as the sport purported to be. Now they and the ice itself are slammed with messages. On movie screens, animated cartoon shorts used to fill the time before even grown-up movies now commercials and advertorial product spots are the norm.

We at NOW have had to negotiate the shifting sellout sands for almost 30 years, including people’s efforts to get us to sell out to them.

NOW Magazine – owned by Alice Klein and myself, in addition to some minority holdings by staff, family and friends – has never been for sale. Of course, large publishing companies have tried to buy it over the years – that’s what they do – but we have never been interested.

The Toronto Star used to print NOW after buying a smaller printing company we had used for years. That relationship ended when then Torstar president John Honderich told Klein and me at a bizarre lunch meeting that he would no longer print NOW unless we sold him the paper.

“Doesn’t have to be over 50 per cent right away,” he helpfully advised.

He also hissed, “You are the competition,” because at the time the Star published a faux alt weekly, Eye, which folded last week.

We said no and took our multi-million-dollar printing job to a less carnivorous supplier.

One-time independent weekly New York’s Village Voice helped inspire us to launch NOW by its example, but in the mid-90s the Voice tried to seduce us into joining it in founding a continent-wide chain of alt news weeklies, a kind of anti-indie organization.

While flattered by the invitation to become part of something bigger, we said no thanks. The Voice went ahead, creating an American chain that ultimately merged with an ambitious West Coast alt weekly chain it had previously been fighting.

Those papers have now shrunk drastically in size, revenue and influence, handicapped by the crushing debt load that financed their ill-advised expansion. Ironically, every week NOW Magazine routinely publishes issues significantly larger than the Voice that inspired us.

On a weekly basis, the question of selling out is most likely to arise in terms of advertising. Since day one, some people with cheques have asked how to get on the cover or guarantee positive coverage in our pages. 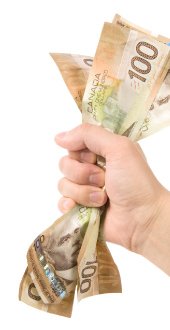 One of the earliest and most egregious examples of this occurred when now-convicted felon Garth Drabinsky directed us to fire our brilliant film critic, the late John Harkness, or he would pull all of his advertising for Cineplex films and kick us out of all of those theatres.

Harkness had been quoted as making unflattering comments about Cineplex’s programming choices – “real butter on the popcorn, ersatz films on the screen” – in GQ. Cineplex was one of our biggest advertisers and distributors, but there was never any question of dropping Harkness. And Drabinsky did make good on his threats. He tossed NOW from all his cinemas and pulled every bit of his advertising from NOW.

But this happens very seldom. The vast majority of advertisers respect and embrace our “not for sale” approach. They understand that the fact that we publish what we believe, not what has been bought, is essential to our powerful relationship with our readers.

This relationship ultimately serves our advertisers because of our big readership. In fact, many advertisers have honoured us by sticking with us over time despite extreme pressure occasionally applied by others who found our editorial positions challenging. And we appreciatively say thanks.

The only time we’ve ever sold our cover, despite numerous requests, is this week, when nobody asked. Stealing an idea from Morgan Spurlock and his film The Greatest Movie Ever Sold – to which we gave a crap review – we explore sponsorship by selling our not-for-sale front page for charity.

The revenue from this week’s cover “sellout” goes to Regent Park Focus Youth Media Arts Centre, a youth organization that helps kids develop media creation skills. Seems like a natural choice, and Regent Park is just around the corner from the NOW building at Church and Shuter.

Another way to get a publication to sell out is to insinuate advertising and marketing messages into editorial. It’s kind of like product placement in movies or TV, but instead of a character holding up a bottle of Coke in a scene, a marketer’s message is slipped into editorial copy, most commonly through branded corporate title sponsorship of an event or even a building.

Over the years, we have been pretty hardcore in resisting this, and we’ve pissed off serious ad buyers along the way. We have felt that the relationship between an event and its corporate sponsor is not our responsibility to share what we give our readers is the essential information and critical commentary.

Do you need to know who is sponsoring an event to find or enjoy it? Does a computer or auto manufacturer’s name stuck in front of it help you savour it more? Corporations are free to find all kinds of creative ways, including advertising, to tell the world about their kind support.

The most aggressive, and ultimately futile, demands that we use corporate names as part of the names of events came from the cigarette companies, which eventually had no other avenues left to market their brands. One cigarette company attempted to bully a huge cultural organization by the, er, lake into pulling its ads from NOW because we wouldn’t use the corporate name as part of the title of events the org produced.

The event producers stood firm with NOW, thanks very much, the cigarette companies have all gone away and we didn’t promote smoking to people reading NOW for the sake of those advertising dollars.

But even this hopefully high-minded thinking isn’t without its problems. We fear that in our effort to be non-corporate, we may occasionally have confused our readers. When we tried not to use two different telecommunications mega-corporations’ names in the titles of events they helped promote – calling Virgin Fest V-Fest, for example – it wasn’t entirely clear what we were talking about. In that case, in the festival’s second year, we used the corporate name.

We use corporate names for buildings because they usually change less often than event sponsorships, and besides, that’s how these edifices are known. If we send readers to the Centre instead of the Sony Centre, will they find it? We think not.

Almost 20 years ago, Klein and I helped found the North By Northeast (NXNE) festivals and conference, so maybe we’ve gotten softer on corporate naming rights now that we sell sponsorships ourselves. I know we don’t sell NXNE title sponsorship and have never tried to get any of the event’s oh-so-marvellous sponsors mentioned in NOW.

While we still don’t use corporate names in editorial, we have occasionally used a sponsor’s name in a listings information box accompanying a story. Are we trying to score some of that dough for our own event, or are we just more understanding of what the producers face trying to finance their project?

Like our relative hipness or effectiveness at resisting the impulse to sell out, the degree of our success at managing these temptations is for you to decide, not us. We hope we continue to earn your trust, and are confident you’ll continue to tell us when you feel we don’t.