How can I sustain the spring fever I'm feeling? 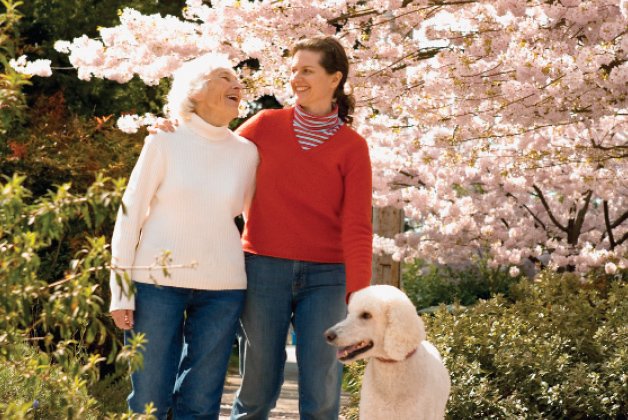 What’s that feeling you’ve got?

“It’s spring fever,” Mark Twain wrote in Tom Sawyer, Detective. “That is what the name of it is. And when you’ve got it, you want – oh, you don’t quite know what it is you do want, but it just fairly makes your heart ache, you want it so!”

It’s a buoyant lift in energy and, some say, a boost in libido. As Tennyson said, “In the spring a young man’s fancy lightly turns to thoughts of love.”

More sunlight and warmer temperatures are likely putting a bounce in your step, and those who suffer from winter S.A.D. are feeling better. (Unfortunately, for the few who suffer from summer S.A.D., the trial is just beginning.)

Is spring fever a real thing? And if so, how can we optimize this bushy-tailed feeling?

“There’s little doubt that many experience a surge in libido in spring. From a clinician’s point of view, it’s not clear why. There’s evidence of reduced serotonin levels in certain parts of the brain in winter. So the receptors become very sensitive to serotonin. At winter’s end, there’s a lot more sunlight and serotonin, so people get active and energized, and dopamine is probably coming in as well.

All these things are converging with the increase in light and warmth. These could be contributing factors. There’s probably a very good scientific reason, but it hasn’t been studied carefully.”

“The relationship between melatonin, seasonal changes and mood is intriguing. Bright light exposure suppresses the brain’s production of melatonin, which is generally produced during sleep. Our light exposure increases as we enter spring. There is reason to believe that this is associated with an increase in energy and a decrease in the need for sleep. Indeed, it is attractive to speculate that this is the link between melatonin and spring fever.”

“There are probably biological and psychological factors that cause the lift in energy we sometimes experience with the beginning of spring weather. The increase in sunlight likely has something to do with it, as does the warmer weather and the increase in physical activity and exercise.

Exercise is a potent antidepressant. The psychological effects of being freer and the excitement all that nicer weather brings also contribute. I imagine for some this would impact sex drive.”

“April is the month of alleviation from winter grief, though most people with S.A.D. don’t feel fully recovered until the first week of May. When the springtime effect finally sets in, people start feeling distinctly higher – thus the poetic allusion to fever. During this transition period, some people’s moods start swinging up and down, though the trend is increasingly up. We should be on the lookout for first-time manic episodes in spring and seek prompt medical attention. The milder versions are exciting and spell relief from winter’s drag-down. If the wished-for low-grade spring fever just doesn’t seem to arrive, a good way to trigger it is by raising the window shades in your bedroom so the earlier dawn makes contact with your eyes and signals the inner clock to respond more strongly to the seasonal change.

A second strategy is to front-load your day with outdoor light rather than rushing to work directly from the house. Take a walk, jog or bike ride right after you get out of bed, before you begin your morning routine.”

“Take advantage of increased motivation levels and give your body some much-needed TLC. A short 10-day spring cleanse can help boost energy levels. But remember, this is not a fast. You should not be starving while cleansing.

The key to a good cleanse is to include enough lean protein to keep you feeling full, plus adequate whole-food calories. Focus on whole foods: fruit, vegetables, vegetable juices, ancient grains, legumes and lots of water.

You may feel sluggish and tired for the first three to five days as your body goes through carbohydrate and caffeine withdrawal, but after that you should notice a boost in energy.

I recommend taking a high-quality probiotic supplement and some liver herbs during a cleanse. One key detox herb, milk thistle, has been shown to prevent the destruction of new hepatocytes (liver cells) and stimulate their growth.

When choosing an herbal detox supplement, avoid products that contain laxative herbs such as cascara. One last key aspect is supporting elimination through the skin. Increase sweat production by sitting in a sauna for 15 to 20 minutes each day.”

“Winter is death, and spring is renewal. The organ is the liver the colour is green. It’s a new beginning. Spring is a great time to start an exercise routine, cleanse and refrain from taking vitamins. Taking vitamins and cleansing are opposites: taking vitamins is adding stuff cleansing is cleaning out.

In Chinese medicine, your reproductive organs get energy after everything else has been fulfilled, so your fancy will turn to love.”