My year off men is coming to a close 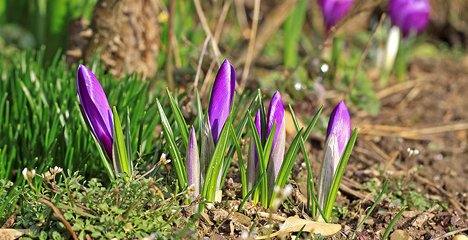 I think it’s really appropriate that I began my Manbbatical in the springtime. Autumn has always been my favorite season – there’s something so bittersweet about it.

The colors, the smell of wet leaves, the romance and wistfulness of circumstances coming to an end… The shorter days, and the impending chill seem lonely to me during those falls when I know I might not have anyone to cuddle up with during the long, cold Canadian winter. For some reason I’ve always sentimentalized those crisp, harvest days.

I never really give spring the eminence it deserves. Maybe it’s because I’m usually just so over winter by the time it arrives, I associate it with its blistery-cold friend and i just want them both to take a hike. Considering its’ temperatures are so similar to fall, I should like it. After all, sweater/t-shirt and jeans/flats weather has always been my favorite. Maybe its’ impending omen of rebirth and renewal scare me.

But this spring is different. I can almost feel the earth turning on its axis, and though it may seem incredibly selfish, I took the supermoon last week as a good precursor of the big, shiny, beautiful things that are to come. Maybe I’m just really looking forward to getting laid. Maybe that pot I smoked was just that good. Either way, I’ll take encouragement wherever I can find it.

I actually forgot that spring has now arrived, until I opened my eyes and checked Twitter.

As I buried my face into my kitten’s soft, furry stomach, I smiled. THE LAST SEASON OF THE PROJECT! It’s coming full-turn!

Though it feels like the past 10-plus months have flown by, so much has happened that sometimes I feel like I couldn’t have packed any more adventures into the past three seasons.

Last year at this time I was 35 pounds heavier, wasn’t yet headlining as a comic, wasn’t working on anything as an actor, I didn’t have a writing agent, I was lacking in the determination department, I wasn’t pro-active in trying to make my life better (therapy, gym, volunteering, etc…) and my beautiful little niece wasn’t yet part of my life.

My focus was misplaced, and though I had so many choices and opportunities, I couldn’t quite figure out what road I wanted to travel.

I was scared to set goals and genuinely try to realize my objective. I’m not sure if it was a fear of success or a fear of failure, but either way – I must have been scared of something… I have always had (and worked for) so many resources at my disposal. I feel like this is the first time I’ve categorically capitalized (or tried to) on them. It’s all always been there for me to use and develop, and I feel like I can finally see it – or at least I am beginning to.

I’m not sure if it’s the absence of a boyfriend that’s facilitated my concentration, but it’s undeniably improved since I began this project. I think it has more to do with the fact that I wanted to change, so I just did. I usually try to complicate things, but it can be as simple as that.

Spring is seen as a period of growth, renewal and rebirth. It wasn’t intentional that I began my project during such a metaphorical season, but I did. (Oh, the poetry of it all!!!)

Everything is/trying to/will be blooming passionately, and spring fever is beginning to crawl through my veins like I’ve just been started on an I.V. transmitting a cocktail of vigor and opportunity.

You know in Great Expectations, when Dickens talks about that March day, when it’s summer in the light, and winter in the shade? I’ve always loved that image… it’s so true of springtime and of life.

I like a little shade now and then, just as I like winter for certain reasons. Because just think of how unexciting the spring would be if we never lived through our winter.