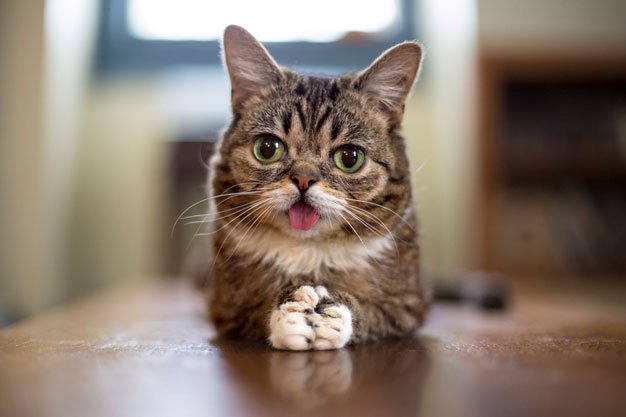 One of America’s biggest, cutest celebrities will be doing a meet-and-greet at the TIFF Bell Lightbox on April 14.

It’s Lil BUB, a four-year-old feline from Bloomington, Indiana, and arguably the internet’s most popular cat.

Lil BUB and her owner Mike Bridavsky will be at TIFF for the third annual Just for Cats Video Festival, which presents the best kitty-themed online videos on the big screen. There are two screenings (at 7:15 pm and 9:30 pm) of the 65-minute reel and sold-out VIP experiences that include meeting Lil BUB. Tickets to the screening are $22 and can be purchased online or at the TIFF box office. All proceeds go to the Canadian Federation of Humane Societies and the TIFF Pocket Fund.

“We started the festival three years ago at a time when cat videos were peaking online,” says Magali Simard, festival host and proud cat-owner to Prince. “We thought, ‘Why don’t we get people together in a very social way to view something that’s typically done solo with headphones on?’ It took off extremely well.”

“This year, we pushed it one step further and got Lil BUB, who is the cutest thing alive,” Simard says. “We have 100 people who bought $100 tickets to meet her, which is impressive. While the regular tickets don’t let you meet BUB, we’re going to bring her on stage to introduce both screenings.”

Lil BUB shot to fame in typical online fashion: a Tumblr photo of her was shared on Reddit in 2011. People around the world became captivated by BUB’s unique facial expression – her tongue hangs out of her mouth – which is due to a genetic mutation that results in a short, toothless lower jaw. Alas, a star was born.

In her near-five years on Earth (her birthday is in June), BUB’s owner has chosen to use his cat’s celebrity power for good. Bridavsky runs a website and online shop that benefits the ASPCA and BUB only makes appearances for fundraisers. In 2013, a documentary starring the cat, Lil Bub & Friendz, won the Best Online Feature Film category at the Tribeca Film Festival, and she wrote a book, Lil BUB’s Lil BOOK, that same year.

All the while, BUB maintains an impressive online following, with 67,000 Twitter followers, 1.2 million on Instagram and over 188,000 subscribers to her YouTube channel. For TIFF to convince BUB and Bridavsky to make the nine-hour drive from Indiana is a real coup. Simard admits that she’s so excited to meet the cat, she might cry.

Audiences who make it to the screenings will be greeted by the soothing sound of a purring cat as they take their seats. “It’s like you’re in the belly of a cat,” Simard explains.

The film reel that follows, curated by Minneapolis’s Walker Arts Centre, strings together roughly 60 short videos, ranging from 10 seconds to two minutes. The videos are different each year and reflect the most recent crop of videos online. A short section devoted to older videos highlight the felines that started it all – a salute to the internet’s OG cat celebrities, like BUB.

“We’re celebrating the phenomenon of internet cat videos and how they take a huge space in our pop culture and internet-consuming culture,” Simard says. “It’s a one-night-only cat party where you can grab a drink, head into the cinema and watch videos. I don’t know how an event can be better than that.”