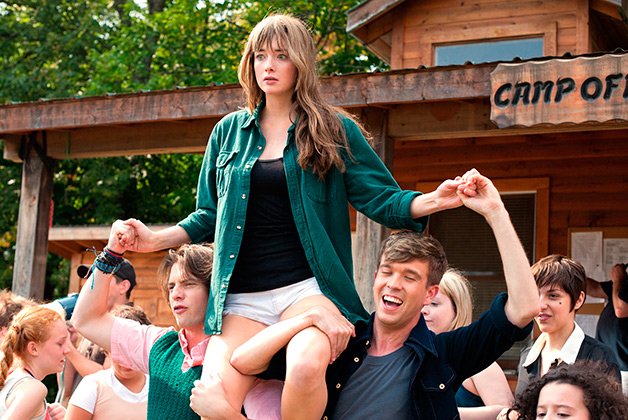 Allie MacDonald camps it up in Stage Fright.

Jerome Sable gets full marks for ambition. Stage Fright, his debut feature, takes on not one, but two movie genres – the musical and the slasher flick. While not everything works, he more than lives up to the promise he showed with his award-winning short, the similar genre mashup The Legend Of Beaver Dam.

Ten years after Broadway diva Kylie Swanson (Minnie Driver) is butchered on the opening night of The Haunting Of The Opera (get it?), her twin kids Camilla (Allie MacDonald) and Buddy (Douglas Smith) are working as cooks at a musical theatre summer camp headed by Kylie’s partner and producer (Meat Loaf), who’s looking for a comeback.

When Camilla tries out for the camp’s production of Haunting, weird things begin happening offstage, seen through the POV of the masked killer and scored to some wicked guitar riffs. Is it the lighting guy? The creepy groundskeeper? The jealous girl competing for the part?

Sable throws in allusions to everything from Hellraiser to Carrie, and the camp setting (filmed in Parry Sound and North Bay) gives the exterior shots authenticity.

Sure, the opening third rambles, the tone occasionally feels icky – those prepubescent campers aren’t gonna die, are they? – and there’s some problems with lip-synching and looping of songs.

But the tunes (co-written with Eli Batalion, who’s got a cute cameo) are clever, the final reel is filled with lots of gruesome, unpredictable fun, and the killer’s screeching theatre-related bons mots are to die for.