George Brown Theatre finished its season with a double bill of shows, Ibsen's Peer Gynt and an adaptation of Tolstoy's. 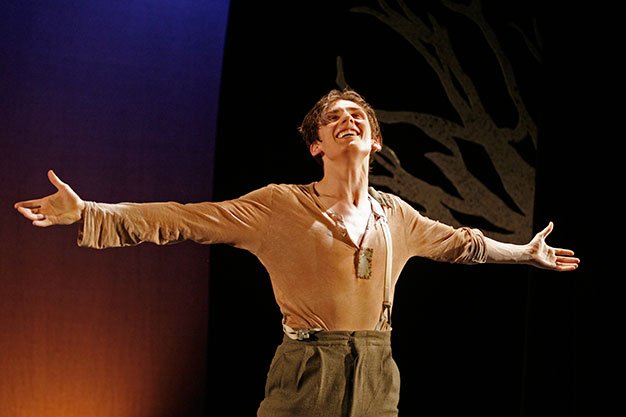 George Brown Theatre finished its season with a double bill of shows, Ibsen’s Peer Gynt and an adaptation of Tolstoy’s Anna Karenina. The contrasting productions, in terms of their different styles and use of ensemble, closed Saturday (April 18), gave the graduating class a real workout.

Peer Gynt is difficult to stage, in part because of its cinematic flow and a second half that’s more philosophical than dramatic, though director Todd Hammond’s staging often made the material theatrical. At its centre is Peer, a storyteller and ambitious adventurer who travels the world seeking fortune and, though he doesn’t realize it at the start, love.

Matthew Finlan’s Peer focused the production with a performance that was as riveting physically as vocally. He captured the audience right from the start with a tall tale about a reindeer hunt and held us for most of three hours with adventures that involve the abduction of a bride, a troll king and his daughter, a scene in a Bedouin camp and another in a madhouse.

Finlan had good support from a number of the other actors, notably Lena Maripuu as Solveig, whose affection for Peer never wavers Michael-David Blostein as the Thin Person, an eerie figure representing death Graham Conway as the black-garbed Troll King and Sarah Doyle as his daughter, the Woman in Green, first in love with Peer and then, when he rejects her, determined to haunt him.

Doyle’s been memorable in every George Brown production this year, even when she played a minor maid’s role in the company’s winter show, Love For Love. Her focus and handling of text were always impressive.

For Anna Karenina, adapted by Helen Edmundson, director Allyson McMackon brought her trademark movement work, which she’s developed with Theatre Rusticle. The physical work defined the multitude of characters not just through what they said but also through their often stylized actions.

Edmundson’s version, here performed as a single act, cuts and shapes Tolstoy’s massive, eight-part book. At the play’s centre are two characters. The first is Anna (Annie Tuma), the married woman who has an affair with Vronsky (Conway) and eventually commits suicide by throwing herself in front of a train. The second is Levin (Iain Moggach), a philosophical landowner who loves the young Kitty (Jocelyn Adema).

The adaptation has Anna and Levin commenting on city versus country life and the very different treatment of women and men. Over the course of the play, his fortunes and spirits rise while hers deflate.

McMackon added another layer by having Anna and Levin doubled by other actors Priscilla Taylor was the Anna Shadow, and Finlan the Levin Shadow. These two echoed, commented, explained or offered contradictory opinions for the other Levin and Anna.

Even with the 17 actors introducing their characters at the start of the show, the storyline wasn’t always easy to follow if you didn’t already know something about it. Ultimately, too, we didn’t get caught up in the central characters’ emotional journeys.

Still, there was strong work by the principals as well as Doyle as a woman interested in Levin Adema’s Kitty, who grew from a silly youngster to a responsible adult and Francois Macdonald as Anna’s formal, older husband, determined to keep their marriage together even when he discovers her adultery.

The director used a variety of music, ranging from Russian peasant songs to snippets of Prokofiev, Shostakovich and Mozart, often as support for wordless scenes. An early ball defined the relationships of those attending, while later in the play Anna, whose sexual misconduct has become public, is rejected by the society to which she once belonged.

That snubbing happens at the opera, which in McMackon’s clever staging was a performance of The Magic Flute the Queen of the Night’s coloratura notes became laughter directed at Anna.

Because Nobel laureate Alice Munro is known for her exquisite short stories, her work rarely makes it onto stages except in literary readings.

So what a treat to see Stories By Alice Munro, by the San Francisco company Word For Word. The show got a run at the Isabel Bader last weekend before travelling to France.

The program consists of two Munro stories: The Office, from her first book, Dance Of The Happy Shades, and Dolly, published in her most recent collection, Dear Life.

These aren’t exactly readings, and they’re not really adaptations. Nothing is cut out every word of both stories is spoken. But they “come alive” in performance.

There’s a minimal set, some props and an ensemble of five actors together narrate the stories, often illustrating a bit of action and at times sharing a single sentence.

The result can be extraordinarily effective, particularly in The Office, about a woman writer (Jeri Lynn Cohen) who rents an office in order to work but keeps getting harassed by the landlord, Mr. Malley (Paul Finocchiaro).

Written nearly half a century ago, the piece still resonates, particularly in the woman’s desire to have what Virginia Woolf called a room of her own – away from her family – and the landlord’s patronizing attitude, which would be called “mansplaining” today.

There are terrific flourishes in director Joel Mullennix’s staging, especially in one quick sequence where the woman tries out calling herself a writer to the blank stares of people at a cocktail party. And having bouncy bass music repeatedly accompany the landlord coming down the hall to visit the woman is also effective.

Dolly, about a woman (Sheila Balter) who meets a door-to-door saleswoman (Susan Harloe) who, it turns out, once dated her current partner (Howard Swain) is more structurally ambitious, moving around in time like a lot of Munro’s later work. The result is tonally uneven. And Balter isn’t as strong or focused a performer as Cohen.

But again there are lovely directorial touches, from an impulsive car trip that makes you feel you’re along for the ride to a climactic reckoning scene that’s full of surprises.

Are you a fan of the British series The Vicar Of Dibley, starring Dawn French as the new vicar in a small town?

It premiered on the BBC in 1992 at the height of a debate about ordaining women ministers.

Last year Theatre Columbus adapted it as a company fundraiser. This year they do it again in a new version by Arthur Milner, directed by Jennifer Brewin and Jenny Salisbury with Colin Doyle.

It features performances by 10 United, Anglican and Presbyterian ministers from around the GTA, including five from the first production. Anne Hines plays Geraldine Granger, the French role.

Equity in Theatre is an initiative aiming to balance gender inequities in Canadian theatre.

The group uses a variety of approaches to “promote dialogue, generate greater awareness of and exposure to women theatre practitioners and develop community-based action plans to help fix industry imbalances.”

If this is important to you, there’s a day-long symposium Monday (April 27) at the Theatre Centre to discuss issues and tactics.

To register, go to eit.playwrightsguild.ca.