Solid ShrewShakespeare BASH'd had its first hit with a Fringe production of The Taming Of The Shrew, and its recent. 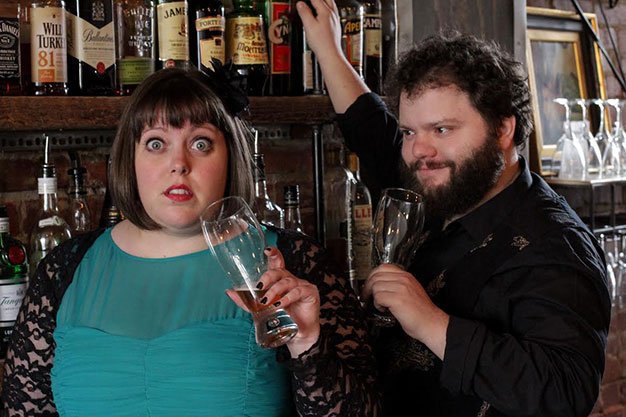 The Taming of the Shrew's Julia Nish-Lapidus and James Wallis

Shakespeare BASH’d had its first hit with a Fringe production of The Taming Of The Shrew, and its recent remount (the show closed Sunday, April 12) was just as much fun and expertly staged.

With Alex Johnson helming, taking over from original director Eric Double, the show was again presented in a bar, the Monarch Tavern, which let audience members have a beer while watching.

The 11-member cast, clearly enjoying themselves, shared that energy with us from the beginning scene, in which Alex Crowther as the drunken Christopher Sly, here a sloppily romantic pianist, is audience for the unusual love story of Katherina (Julia Nish-Lapidus) and Petruchio (James Wallis).

As you might remember, until the difficult Katherine is wed, her father, Baptista Minola (the authoritative Tim MacLean) won’t give anyone the hand of his other daughter, Bianca (Caroline Toal).

As always, the company handles the text with admirable sureness and clarity, and their physical comedy is just as entertaining. There’s lots of good chemistry between the actors, notably Lucentio (Andy Cockburn), one of Bianca’s suitors, and his servant, Tranio (Crowther) and that between Petruchio and his, the clownish Grumio (David Ross).

Another standout at the Saturday matinee was Kelly Penner, who stepped into the role of the manipulative Hortensio, another wooer of Bianca, when the regular performer wasn’t available. Script in hand, he brought some hilarious line readings to the material, proving himself a strong ad-libbing comedian as well as a Shakespearian actor.

Contributing to the exuberance were Christopher Fowler, playing dual roles and milking laughs in a good way, Ellen Hurley as another of Petruchio’s servants and Catherine Rainville as the frosty, sharp-tongued widow who marries Hortensio.

But the show doesn’t work without a Kate and Petruchio who have a palpable emotional bond. In the hands of Nish-Lapidus and Wallis, the pair are clearly fascinated by each other from the start. Over the course of their battle of wits and spirits, their affection clearly grows.

By the time of Kate’s famous last speech, they are clearly devoted to each other, and Petruchio is obviously and lovingly touched by her words. Still, that speech of obeisance is irksome, no matter the context in which it occurs.

You can catch more Shakespeare BASH’d this summer as part of the Fringe: The Merry Wives Of Windsor will play at the Victory Cafe.

Culture vultures love Art of Time Ensemble for mixing classical music with many other artforms: spoken word, dance, theatre. No one else does it with such consistency and panache.

First up was a remount of Peggy Baker’s Her Heart, a work the company mounted two decades earlier with Baker. It was performed this time by Jessica Runge, and while you could imagine the long-limbed Baker do it, Runge threw herself into the expressive, moody piece with gusto, suggesting a woman stuck in some existential limbo, full of expectation and optimism as she flitted on and off the stage, evocatively lit by Simon Rossiter.

The second, and much more ambitious piece, was James Kudelka’s #lovesexBrahms, a rich, beautifully detailed work obviously influenced by Kudelka’s movement adaptation of Edith Wharton’s From The House Of Mirth along with his dance-with-puppet opus, Malcolm.

Someone told us on Twitter that the puppet, made by Nell Coleman, wasn’t Malcolm but his “Greek cousin,” named Sarkis. Whatever his name, he fit beautifully into this elegant world of societal conformity and dysfunctional family dynamics.

Was Sarkis a doll? A potential lover? A chaperone? Something to come between an aging, sparring couple?

All of the above – and more. The ensemble, headed by the regal Evelyn Hart, was perfection, with lovely turns by Laurence Lemieux, Louis Laberge-Cote and Bill Coleman.

And underscoring both pieces was Andrew Burashko’s nuanced piano playing of the Brahms.

You know Nobel Prize winner Alice Munro’s stories on the page now you can discover them on the stage. And ironically, the show is coming to Toronto all the way from San Francisco.

Word for Word Performing Arts Company is bringing Stories By Alice Munro, which just completed its California run, to town for a short presentation starting Thursday (April 16) it then heads to France.

The production features two of the Canadian author’s stories, The Office and Dolly, under the direction of Joel Mullennix.

It’s been too long since we’ve seen Ann Holloway on the stage, and we’re happy she’s back as writer/performer with Kingstonia: Up From Under.

The show, a sharp look at Western culture’s sexist slant, begins as a probe into the sexual habits of the small town of Kingstonia before widening its satiric shots to examine the manipulation of feminist creation myths and sexuality.

Using laughter as a weapon against misogyny, it’s sure to let Holloway use her comic skills to skewer male sexism, which she began with 2005’s Kingstonia Dialect Perverso.

The production features cameos by Keith Cole and Ryley Murray.

As Shakespeare BASH’d has proven, some people like to enjoy their Bard with a few pints.

The two are combined, both onstage and off, in the annual Shakesbeers Showdown. Sponsored by Spur-of-the-Moment Shakespeare Collective, it happens Wednesday (April 22) competitors take part in an improvised challenge.

Contestants are judged on who can recite their lines most accurately while being razzed by the audience and keeping the most beer in their cups.

Little Black Afro Theatre is a company that gives voice to emerging creators while it gives back to the community.

Its latest production, part of the company’s Emerging Artist Project, aims to cultivate creativity as well as social consciousness among its members. Opening is Tuesday (April 21).

On the bill is Phillip Turkiewicz’s I Was Once On Fire, in which a teen who sets herself on fire is ignored by her neighbours. At certain performances, it will be paired with a reading of Alomar Kocur’s Jared’s Story, whose central character seeks inspiration for his writing as well as a new perspective on life.

A portion of the box office goes to Toronto Youth Development.