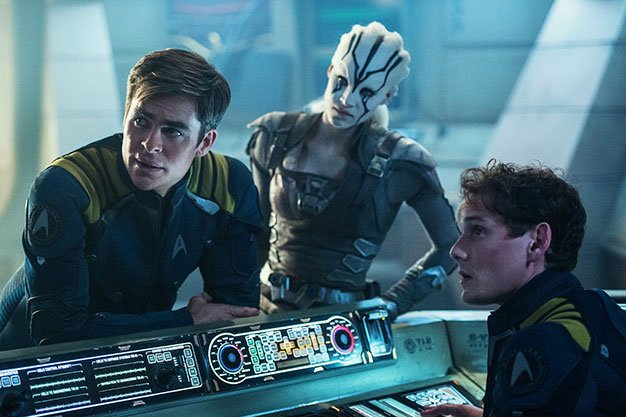 Star Trek Beyond has a few pacing problems and one ending too many, but it’s still a really satisfying adventure that comes closest to recapturing the spirit of the original series – and is perhaps the first film in the rebooted series that truly stands on its own.

Three years into their deep-space mission, the crew of the Enterprise is getting comfortable with boldly going where no one has gone before… until a distress call sends them into an uncharted nebula where they’re captured by a madman (Idris Elba) bent on starting a war with the Federation.

The script, written by Simon Pegg and Doug Jung, separates the crew into smaller groups early on: Kirk (Chris Pine) and Chekov (Anton Yelchin) look for this movie’s McGuffin in the wreckage of a starship, Sulu (John Cho) and Uhura (Zoe Saldana) are captured and plan an escape, McCoy (Karl Urban) must tend to the gravely injured Spock (Zachary Quinto) after a crash and Scotty (Pegg) finds a new ally in the alien warrior Jaylah (Sofia Boutella).

Stepping in for J.J. Abrams – who’s been a little busy with the Star Wars franchise – is Justin Lin, who’s clearly learned something about orchestrating complex action sequences while juggling large casts of characters on four Fast & Furious movies.

Lin replicates Abrams’s breakneck energy for a couple of elaborate set pieces, but he knows the story’s real pleasures lie in its middle movement, as our isolated heroes suss out their situations and work to find their friends.

It’s more of an ensemble piece than any of the recent Trek movies have dared to be, less beholden to the franchise’s past while still finding a way to use history for spare parts.

There’s also some wistfulness in a subplot about the passing of Leonard Nimoy’s Spock Prime, now filtered through the sadness of seeing the late Yelchin running around fresh-faced and vital in Chekov’s action scenes. The film is dedicated to both actors, and that’s as it should be. Star Trek has always been about loyalty.