STARS OF DAVID conceived by Aaron Harnick and Abigail Pogrebin (Harold Green Jewish Theatre/Angelwalk). At the Toronto Centre For The. 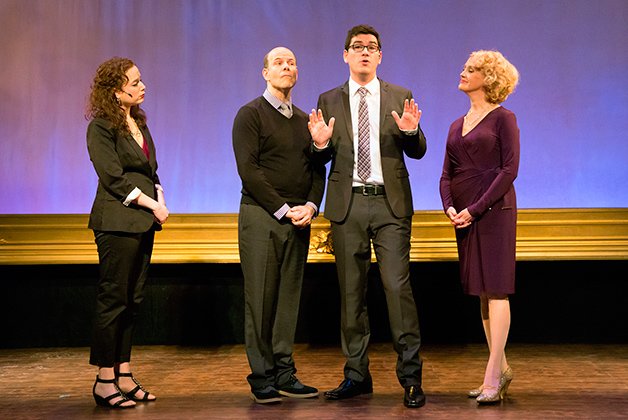 The Harold Green Jewish Theatre’s latest offering, Stars Of David: A New Musical, begins by posing the question, “What does it mean to be Jewish?” For nearly 90 minutes, it explores some heavy themes of identity, but an overabundance of frivolous song-and-dance numbers and an unvarying scenic structure may send your attention shuffling off to Buffalo by the midway mark.

The show is based on Abigail Pogrebin’s 2005 book in which she interviewed prominent American Jews about legacy, religious observance and traditions. For the stage version, she teamed up with Aaron Harnick (Sheldon’s nephew), enlisting Broadway composers and lyricists to create songs based on the interviews. They added some monologues and turned it into a concert-like production.

For each song, an actor embodies someone famous, and musical numbers receive top-notch performances by Darrin Baker, Will Lamond, Lisa Horner and Gabi Epstein. Epstein in particular gets to display her versatile voice in Pogrebin and Tom Kitt’s affecting song about a teenage Ruth Bader Ginsberg getting excluded from minyan prayers following her mother’s death. Epstein also earns the night’s heartiest applause by channelling Fran Drescher in an upbeat anthem by Amanda Green.

Pacing poses obstacles, too. Pogrebin is a former 60 Minutes producer, and during slow sections you practically hear the ticking of that infamous stopwatch. Alternating between monologues and musical numbers, the show feels segmented. Director Avery Saltzman’s staging becomes repetitive, but the use of vintage video footage does help break things up.

This musical is emphatically Jewish and unequivocally American. Younger audiences may not relate to Michael Feinstein, Gloria Steinem and Edgar Bronfman’s representations of Judaism. And isn’t it time we stop looking to the rich and famous to define our beliefs?