Stash and Futura-designed bikes for sale at AGO

Three limited edition, hand-painted bikes by the New York-based street art icons, part of their Look Ma No Brakes collaboration, are up for grabs – if you have $140K to spare 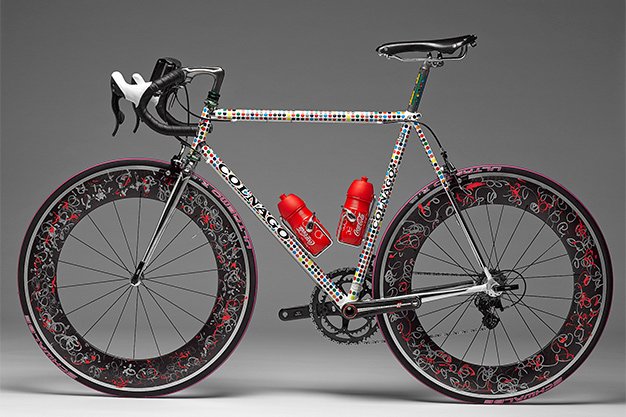 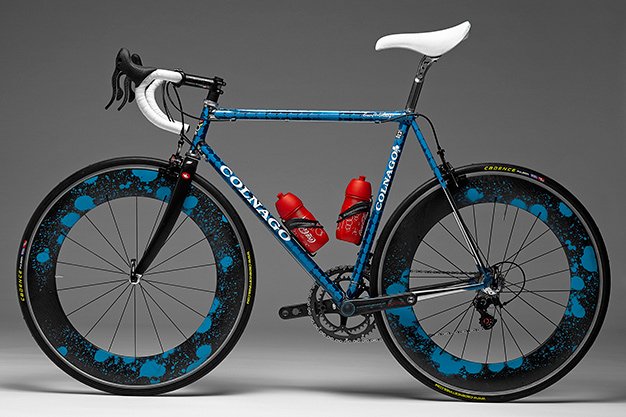 Inside the Art Gallery of Ontario’s bright, high-ceilinged shopAGO, an Art Matters T-shirt goes for $24.95 – not so exorbitantly priced as far as art-inspired swag goes.

In the main window, it’s another story: two hand-made custom bicycles wheeled in a couple of weeks ago carry price tags of $140,000. A third is a relative steal at $30K. Crazy expensive for bicycles (especially with no brakes), sure, but for art, not so much.

And that’s what they are to Louis De Luca, the AGO marketing manager who arranged to have them sold here in time for Bike Month. “They’re functional works of art,” he says.

Decked out with graphic designs by New York street art icons Stash and Futura, the three unique rides are one-offs from the super-limited 2007 Look Ma No Brakes collaboration that Nadir Olivet, who owns the Junction’s La Carrera Cycles, put together with the famed Italian manufacturer Ernesto Colnago. Regular production was capped at 76 with one half featuring Stash’s graphic design – a cool, blue arrow motif – and the other bearing Futura’s dotted, Crayola-bright pattern that Olivet insists is inspired by Wonder Bread’s signature wrap. The $30,000 bicycle is one of two prototypes from the run, and the only specimen with solid blue forks, a glitch in the production run that was caught before 37 more Stash-themed track bikes were on their way.

What makes the two six-figure rides stand is the result of another error of sorts, and like with many strokes of artistic genius, they weren’t planned. “They were mistakes,” says Olivet. “I was quite surprised when (Colnago) sent me two road bikes,” he says, recalling the shipment he received to approve the artwork before full-scale production began. “I never asked for road bikes, I asked for track bikes.’” Unlike the other models, which are fixed-gear, these Stash and Futura bikes come complete with 22-speeds, sit on custom wheels hand-painted by the artists – and yes, they have brakes.

Coming up with a graphic for the sleek, cylindrical tubing of a bicycle frame presented a practical challenge for Stash, whose artwork has appeared on running shoes, street wear, and perhaps most notoriously, New York’s subway system.

“I was really curious to see if the scale worked more than anything, ‘cause it’s hard from 2D to 3D,” he says, mentioning he was only given a template to work with on a computer – the manufacturer dealt with the actual paintjobs.

The concept itself, however, came naturally enough. “Something that I felt was relevant [was] the idea of true cadence, constantly moving, and the whole idea of the arrow was recurring,” he explains. Messing around on Adobe Illustrator, he noticed something: “I laid it out in a pattern and realized…the negative space is also the same arrow,” Stash, born Josh Franklin, says. “To me it really felt right.”

Despite the triple threat of legendary talent, big money, and European craftsmanship at play, and even though the other track bikes sold out (one actually found its way into Kanye West’s hands), the Look Ma No Breaks project has been no cash cow for Olivet. “Have I made money on this? No. Have I lost money? Yes,” he says.

If Olivet will recoup any of his losses remains to be seen. According to the AGO, the bikes – two of which are the most expensive items the shop’s ever even tried to sell – will be fixtures here until they’re bought, or September 15, whichever comes first.

Will buyers step forward? De Luca says, “It’s a tough call. You never know with things like this.” If your bank account is a few digits shy of being able to afford one of the bikes, the AGO’s got you covered: they’re working on a run of Look Ma No Breaks graphic tees that’ll retail for around $25.