Stephen Harper and the Ford Brothers have apparently reached a point where they need each other. 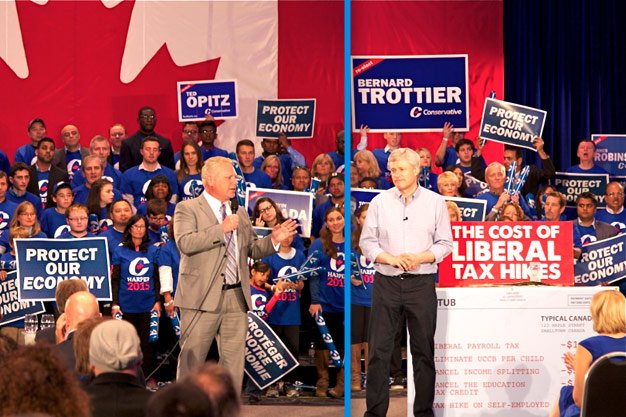 Stephen Harper tried to have it both ways, but it all came down to a photo. One effing photo.

It appeared as though dozens of people had put in dozens of hours organizing a rally for the Conservative leader to procure the benefit of Ford Nation while wearing as little of its baggage as possible.

An apparent effort to shore up support in the northwest GTA, Saturday’s event at the Toronto Congress Centre had initially been billed as a Ford-hosted affair — but by the time it was done, Doug claimed his family’s role in putting it together was limited to getting the word out, and it was almost possible to believe him.

The form of the function, if not its content, left no doubt the Conservative Party of Canada was in charge. Ford events — including Rob’s 2010 and 2014 campaign launches and 2010 victory party, also held at the Congress Centre — are marked by their relative openness. The public is welcome, the media is welcome, and mingling between the two is encouraged. The Fords may have contempt for the press, but they have pride in their fans and are more than happy to show them off — to have real people explain to reporters what it is that draws them Ford-ward.

But the same can’t be said for the Conservatives, who are equally apprehensive about everyone. Upon arriving on Saturday, supporters were directed to the centre’s north ballroom, whereas media were shuffled to a holding area in a room named after Loreena McKennitt. (All the venue’s meeting spaces bear the surnames of Canadian celebrities.) At the appointed time — actually half an hour past, due to the event running late — party staff, RCMP, and other security jointly herded the press to a designated pen at the ballroom’s centre. The New Republic’s Jeet Heer and I accidentally strayed off the path and found ourselves wandering amidst the audience security, spotting our red media badges, dutifully scooped us up and plopped us into the appropriate enclosure, where our proximity to the prime minister and his supporters would be exactly as designed. 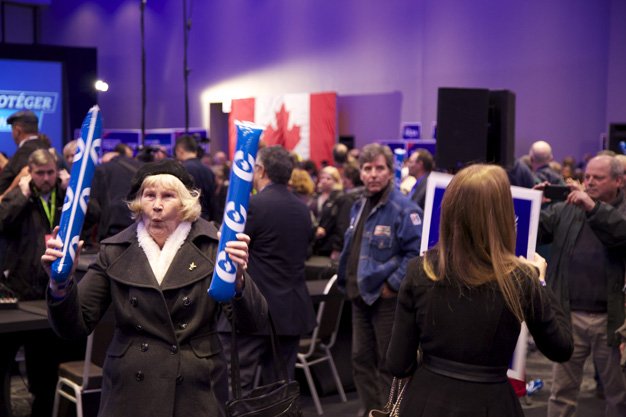 Right now, at the Berkeley Street Theatre, Canadian Stage is presenting a trio of short Beckett works performed by the Irish actress Lisa Dwan. The first, Not I, is a monologue relayed by a disembodied mouth floating in space to achieve the effect, Dwan’s head is strapped into a device that ensures that her mouth, and only her mouth, is lit by a point of light.

If the Conservative Party, always in pursuit of similar precision of experience, felt they could achieve this feat of theatrical engineering, surely they would attempt it.

First up to speak was Etobicoke North candidate Toyin Dada, who managed to say nothing bigoted or hateful, presuming that welcoming Doug Ford to the stage counts as neither. Doug, for his part, stuck to the script, uncharacteristically failing to set any tires on fire while preaching the primacy of business experience. The kind of hyperbolic statements that earned him groans during council speeches were met here with deafening approval, the scene he undoubtedly sees when he closes his eyes at night.

Ford introduced Richmond Hill incumbent Costas Menegakis, who in turn introduced Harper Menegakis’s role was limited to serving as the membrane between them.

Harper soon brought up a special guest: the guy from the Trudeau attack ads who says “Nice hair, though” and mocks aid to Syrians. 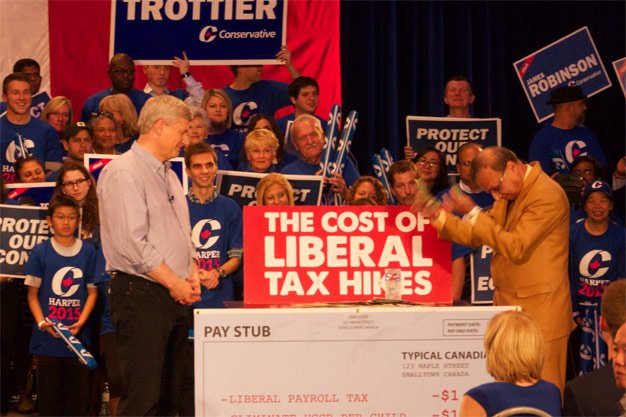 “Back by popular demand, someone you’re all familiar with, star of television ads,” Harper said, sounding proud of his creation. “Please welcome Sanjit.”

A rockstar of ephemeral cultural detritus, Sanjit was given the sort of welcome that would have greeted Rebecca Black had the prime minister brought her to the stage on the same Friday that Friday was popular.

He got to play Harper’s cash game — a regular feature at recent events wherein the Conservative leader rhymes off various ways that a Liberal government would ostensibly ding pocketbooks, as a supporter slams down fistfuls of money to the piped-in “ka-ching” of a cash register. Undeterred by the fact that he couldn’t lean on his famous catchphrases, Sanjit made a point of acting, throwing his whole body into the grisly task.

I wanted to yell “Showcase Showdown!” but was confident the Mounties would tackle me.

All the while, Rob Ford sat cheering in the second row, wearing a black tracksuit from his collection. Would he be called up to address the crowd? By the time Harper, taking no questions, was eventually played off to the same Collective Soul song to which he had entered, the answer was quite plainly no.

The Conservative leader had pulled off the task of surfing along in the Ford family’s wake without letting himself get dragged under. Aside from a brief mention of “the Fords” in the list of people he thanked for pulling the event together, Harper had managed to keep himself insulated from the most direct fodder for attack.

And then minutes after the event concluded — ta-da! 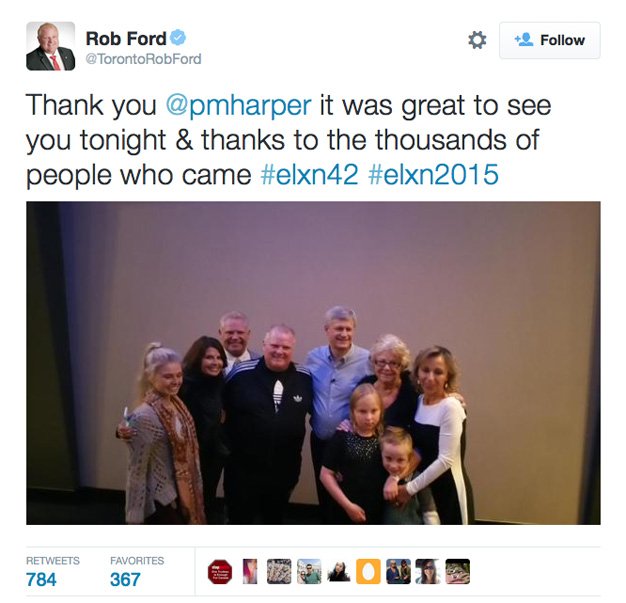 Once-powerful men clinging desperately to each other for relevance — the money shot that the media so badly wanted and that the party itself seemed keen to avoid was of course proffered up by Rob Ford himself.

While the exact circumstances of the pic are unclear, it’s all but certain that campaign sources will eventually dish, especially if the Conservatives lose power and are asked to reflect on moments that it all went wrong.

But the obvious question is whether anyone still planning to vote Conservative would actually be bothered by Harper posing with Toronto’s (possibly) abusive, (probably) drunk driving, (definitely) bigoted, (admitted) former crack mayor.

On a CBC panel the next day, Martin Patriquin from Maclean’s observed that such an image would be poison in “very urban” ridings like Eglinton-Lawrence, where finance minister Joe Oliver is perilously close to losing his seat. But while the magazine’s Quebec bureau chief was likely accurate in his assessment as it pertained to the eastern part of the riding in North Toronto, the district actually stretches well past Dufferin to the west.

In a brief scrum following the rally, Doug Ford even boasted he’d been out campaigning with Oliver that day and that they’d had “nothing but positive responses.”

I was surprised Doug talked to reporters at all, because the wholly foreseeable ultimately came to pass:

“Can I ask you why [in] the former chief of staff’s book, he says that Toronto police helped to cover up Rob Ford’s drunk driving?” asked the Globe’s Steven Chase.

Doug Ford literally ran away from the question.