Despite the mess made of Canada's armed forces, the Conservatives have maintained a near impregnable image as unquestioning supporters of the military 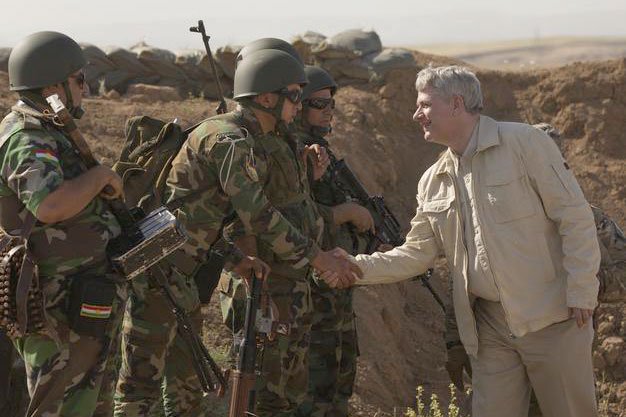 Right up to the end, Stephen Harper told us the Canadian military was on strong footing. And for the most part, we believed him.

Despite the mess made of the Veterans Affairs department, cuts to defence spending and a persistent inability to deliver on much-needed military equipment, Harper’s Conservatives maintained a near impregnable image as unquestioning supporters of the military throughout their time in office.

But if we dispense with the assumptions, a completely different picture of the military record of our notorious Conservative PM emerges.

We might like to believe that in the last 10 years, this nation has sacrificed more of its wealth to the military than we did in the 1970s and early 80s, when another Trudeau was PM and faced criticism for “starving” the military.

But under Harper, balancing budgets and grand gestures like sending our CF-18s on questionable bombing missions overseas – or brinksmanship with Russia – covered up deficiencies at home, particularly in the navy and our defence of the Arctic. On these counts, the younger Trudeau seems to be taking a page from his father’s military playbook.

But back to Harper. Under his watch, spending on defence never exceeded 1.4 per cent of GDP, less than even the alleged darkest days under Trudeau. Over the last two years, that figure has hovered at just over 1 per cent.

Our regular military’s strength has never exceeded 68,705 members. Under the Conservatives, size seemed not to matter a whole lot.

Admittedly, Trudeau’s first years in office saw a notable decline in personnel, from 101,600 in 1968 to 83,000 by 1984, as relations with the Soviet Bloc worsened. Yet the unacceptably low numbers that so raised the ire of critics is still 14,295 more than the best Harper could do with a much more populous nation at war.

Harper would have us believe that the approximately 1,280 land, sea and air personnel currently deployed overseas with NATO in Europe and in the Middle East constitute a worthwhile commitment to our allies. But if we truly think that an overseas military deployment equivalent to the population of the Mississauga high school at which I teach is worthwhile, then the elder Trudeau was quite the warmonger.

According to the International Institute for Strategic Studies, Canada’s military commitment to NATO during the Trudeau years never went south of 2,800 (1972) and steadily increased during his last few years in office to 6,700 in 1984, which is 5,420 more than our overseas commitment to NATO today. Largely erased from our memory is the fact that, under Trudeau, Canada had its own operational bases in Europe (never fewer than two) and a naval station in Bermuda (all closed under Brian Mulroney and Kim Campbell).

Given the ideological differences between Pierre Trudeau and Harper, it should come as no surprise that the former’s government also made a noticeably bigger commitment to peacekeeping.

In the last decade, Canadians have become sensitized to the killing of military personnel at home and overseas. Widespread reporting of these deaths leaves the impression that our military faces unprecedented danger.

But consider that while Trudeau was in power, a total of 328 Canadian Armed Forces members were killed overseas and here at home, more than twice the 126 who have died since Harper took office. We just did not care as much to hear about it, it seems.

The recent Afghan war has, admittedly, prompted the acquisition of some impressive pieces of military equipment, like the Cougar infantry mobile vehicle and Buffalo mine-protected vehicle.

The F-35 debacle aside, Harper had modest success with new aircraft.

But of the fleet of 138 CF-18 aircraft purchased during the Trudeau years, only 77 are still in service, with no viable replacement in sight.

The younger Trudeau has promised to replace them “with one of the many lower-priced options that better match Canada’s defence needs.” Namely, the defence of North America, as opposed to stealth, first-strike capabilities for wars like the one we’re fighting against ISIS overseas.

Trudeau has also pledged to pull out of the air campaign in Iraq and Syria and to make rebuilding Canada’s navy his government’s top priority, including a promise to increase icebreakers and Arctic and offshore patrol ships.

The navy Justin Trudeau is left with remains largely the legacy of his father. Today, much of what makes up the dwindling operations of the Royal Canadian Navy was either launched or contracted and procured under Trudeau’s Liberals, including our main fleet of 12 Halifax-class frigates. Worse still, in the last few years, all of Canada’s destroyers and supply ships have been decommissioned, with no immediate replacement.

When it comes to defence, the true success of Harper’s term in office was that he managed to convince so many we were on the right track.