The Prime Minister's base wants more babies for Jesus, but once they're born they're on their own. 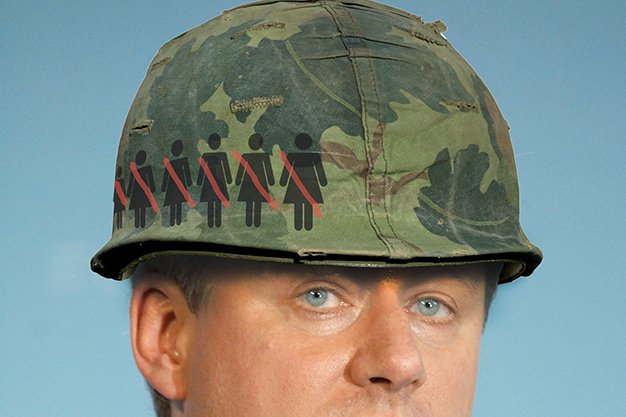 Sunday was International Women’s Day, and all I got from Prime Minister Stephen Harper was a lousy media release.

Oh yeah, there was also the it-would-be-funny-if-it-weren’t-so-blatantly-opportunistic tweet from Defence Minister Jason Kenney, who insinuated, complete with photos of Muslim women in chains, that ISIS would “enslave” all us ladies as soon as the terrorist menace reached our shores. That means “Be afraid, very afraid,” and don’t pay attention to that loss of civil rights hiding behind the curtain of the so-called anti-terrorism bill. Turns out the photos were from ceremonial processions symbolizing the prophet Mohammed’s granddaughter, who was taken in chains to Damascus after her brother Hussein was beheaded.

But I digress, not unlike the Harper government is doing, playing the fear card while good jobs and social programs do a disappearing act.

In his slickly crafted Women’s Day missive, Harper touts his initiatives to “ensure safer communities for Canadian women and their families.” Among them the Protection Of Communities And Exploited Persons Act, which basically strips sex workers of their constitutional right to safety and security, and the Zero Tolerance For Barbaric Cultural Practices Act aimed at polygamy, but really a not-so-veiled slam against Muslims and “brown people.” Like the brown people who, according to Conservative MP John Williamson’s remarks at the Manning Centre Networking Conference on the current state of conservatism in Ottawa on the weekend, come to Canada to steal work from “whities” who get paid to “stay home.”

You know, paid to stay home like single welfare mothers, the preferred target of Mike Harris’s “Common Sense Revolution” in 1990s Ontario, the common sense that gave us the Walkerton E. coli tragedy that killed seven and the death during a record-breaking heat wave of the pregnant Kimberly Rogers, under house arrest for welfare fraud.

It’s no coincidence that many in the Harper government were also in the Harris crew – or that Williamson, at the Manning Centre hoedown, referred to the Common Sense Revolution to describe the HarperCons’ 2015 campaign strategy. None of which bodes well for women.

Not that this will surprise those who have tracked this government’s record on women’s equality since Harper first came to power in 2006. Among its many hits on women was the shutdown of 12 out of 16 Status of Women offices and the entire Court Challenges program, which helped women (as well as members of the LGBT community and those facing physical and mental challenges) fight for their constitutional rights. At the time, Harper referred to those as “left-wing fringe groups.”

The irony is that, both in his International Women’s Day statement and on the Status of Women government website, the emphasis is on “increasing women’s economic security and prosperity” and “highlight[ing] the vital contributions that women make to the domestic and global economy.”

This could explain why Status of Women Minister Kellie Leitch, whose theme of the day was “improving economic opportunities for all,” chose to mark it at a “MOMpreneurs” conference where women could learn to, among other things, “juggle business, babies and blogging.”

“When women succeed, Canada succeeds,” says Leitch, who is, conveniently, also labour minister. “I’m sure we all agree that Canada is far better off when the talents and skills of women are fully represented throughout our economy – from corporate boardrooms and small businesses to technical professions and skilled trades.”

Sure is hard to believe that the Conservative government agrees to that. Consider that one of the first acts of the Harper governments was, at a time of a $13 billion surplus, to reject a Liberal childcare program that took years to craft and negotiate and would have created childcare spaces and allowed women to fully participate in the workforce. Instead, the Conservatives’ gave families a taxable $100 per month for children under the age of six that barely covers the bus fare to childcare.

And yet this is a government that claims to be all about the babies. Or so it seems. Not just because of the frequent votes on private members’ bills, all aimed at limiting women’s reproductive choices, but also because almost everything it does is about encouraging women to spawn. Problem is, it doesn’t give them the support to do so. Instead, it wants women to be dependent on men.

Needless to say, income splitting is great only for those with one high-earning partner – usually a man – while the other partner, usually a woman, tends to work part-time, or not at all. This while federal and provincial revenues are reduced by income splitting by an estimated $11.9 billion.

But as one speaker said at the Manning conference, “Can we really be encouraging some of our most intelligent women to have a career instead of having children without paying a price for that?”

What else should we expect from a government whose justice minister burbles on about diaper changes, packing lunches and taking care of aged loved ones, as Peter MacKay did on Mother’s Day?

This is all tragically encapsulated in its much-touted maternal health policy, which applies not to women here – say, on impoverished reserves – but in foreign lands.

At his lavish and heavily secured three-day Saving Every Woman, Every Child: Within Arm’s Reach Summit in May, Harper held forth on promoting women’s rights without ever once mentioning contraception or how essential it is to maternal health. You can’t be feeding and caring for healthy babies if you keep having another one every year – assuming you survive your pregnancy and labour.

But the PM seems not to care at all, as long as policy plays well to the base, which wants more babies for Jesus. But once they’re born, they’re on their own.

So, yeah, thanks for the media release, Mr. Prime Minister. It’s quite the love letter to Canada’s women.